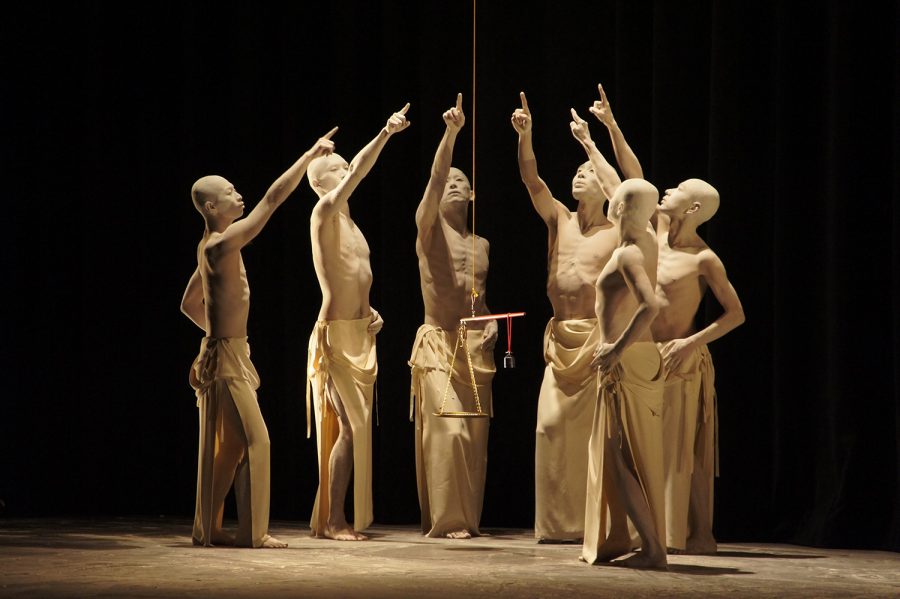 In the dimly lit auditorium, audience members filled the seats of the first level, leaving only a few spots open for Sankai Juku’s performance of Utsushi at Hancher.

Dancing a piece that combined many of their previous performances, Sankai Juku mesmerized the audience with stunning visuals in the style of butoh, a Japanese dance performed by males painted entirely white.

The dancer’s bodies contrasted dramatically against the black backdrop as the performance began. As quickly as the lights went down on the audience, four figures sprung to life on stage, seemingly out of thin air.

From the ceiling hung three scales, each bearing a heaping pile of dust. In the middle of the stage, an even larger pile.

Music began playing while sounds of soft wind swept across the room. The four figures on stage began moving their hands slowly, blossoming like flowers from the ground.

As the music began to build, the movements of the figures grew larger and quicker, then slower, then smaller, then large, and so on.

They moved around the stage as if they were one body. Suddenly, they crowded in the middle, and flour flew from the ground into the air, filling the stage with a powdery breeze.

After a while, the four figures ran off the stage, leaving silence and empty space, before two new figures emerged from the back curtains. These performers began to mimic one another on each side of a rectangular patch of light, creating the illusion of a mirror.

After the two figures left, the room fell dark and quiet. Then, the four dancers returned, each donning black skirts, mangled with white, web-like drapings over the rest of their bodies. Discordant music began to play from the speakers. The music sounded like yelling and crying, and the dancers moved almost robotically.

As the dancers faced the back wall and shimmied their bodies like snakes, their hands trailed down their fronts, where they slowly untied their skirts and dropped them just low enough to show their bare bottoms to the audience, then continued to move from their hips.

This scene looked like something straight out of a nightmare. From the mask that looked like a brain, to the skirts that looked like leaking muscle tissue with slats of blood, it was definitely a creepy sight. Yet, it was somehow beautiful.

By the third segment, the pair of dancers and the quad of dancers had intermingled, so they were no longer with their original group. As they moved about, left and right, forward and back, the powder left on the floor was kicked into the air, returning to the ground like ashes from the sky.

The only sound in the room was the soft shuffling of each performer’s feet grazing across the stage. There was a distant thumping that kept growing as each performer made their way to one another.

They mirrored each other, mimicked one another from different angles, ran off and on the stage, and danced in a way that was so natural, it seemed almost random.

As the performance went on, the music changed pace. The dancers moved around; jumping, crawling, running, rolling.

Then, just as the performance began, it ended with the dancers hands moving like flowers blossoming, and the crowd stood, applauded, and cheered with a sense of confusion, yet full of delight from the wonderful journey presented onstage.