For Democratic presidential hopeful Marianne Williamson, the best way to stand up to climate change, military overspending, and Donald Trump is to firmly say “not on my watch.” 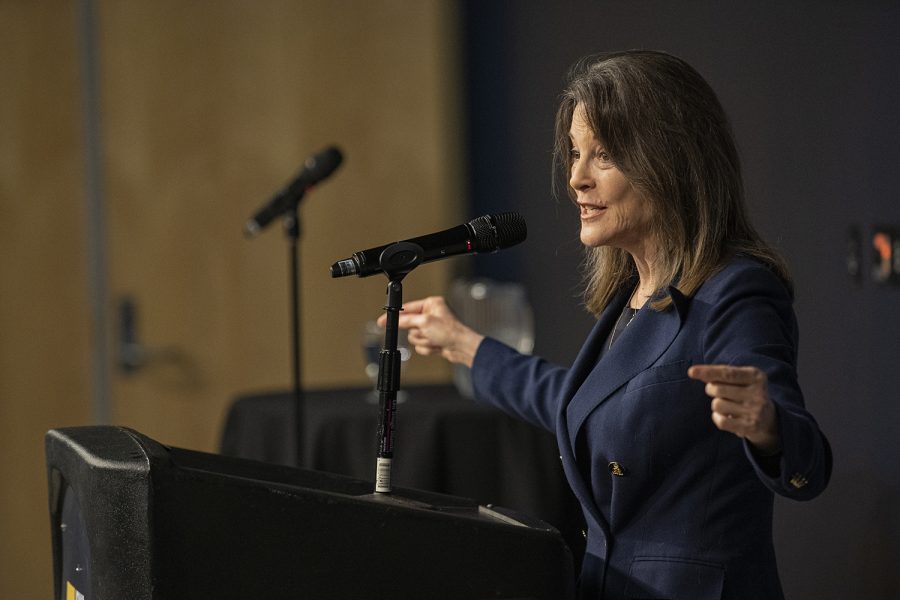 Democratic presidential candidate Marianne Williamson speaks with The Daily Iowan in the IMU on Tuesday, Oct. 22, 2019.

Far-removed from the brisk fall wind in Iowa City, author and Democratic presidential hopeful Marianne Williamson said her campaign “must continue” despite its small size compared to other candidates, adding that “depth is more important than breadth.”

“That mindset has been systematically spread,” Williamson said in an interview with The Daily Iowan Tuesday, referring to the credibility lent only to large campaigns. “On the other hand, truth has a way of rising to the forefront…even for people who see through the smear [campaigns] they still say, ‘President? That’s a funny thought.’ But I am in this fight to elevate the conversations we are having.”

Williamson spoke to a few dozen supporters in the IMU Black Box Theater Tuesday afternoon, fervently sharing her pitch for a “political intervention.”

Williamson, a motivational speaker, spiritual teacher, and author has centered her campaign around elevating political discourse and diverting what she calls the  “erosion of our human values.”

She said other Democratic presidential-nomination hopefuls are discussing issues such as the military/industrial complex, health-care reform, and climate change, but where her campaign differs is the step after the problem is identified.

“My sense is that people do know about these issues — that is why there is so much agitation,” Williamson said. “The point now is that the era of data collection is over. What I often say to audiences is, ‘I might have given you some details you didn’t know about, but now you do know.’ That is where we all have to decide if we are simply going to say, ‘I disagree with what’s happening,’ or firmly say, ‘Not on my watch.’ ”

Donning a tailored, double-breasted suit jacket and maintaining fierce eye contact with the audience for the duration of her speech, Williamson said her candidacy is not contingent on the political establishment that is “detrimental” to the American democratic process.

Williamson also said what she called cognitive dissonance voters feel is nothing new.

“This country has been off course for a while,” she said. “Donald Trump didn’t create all of this. All of this created Donald Trump; 40 years ago, we started buying into this idea that somehow businessmen have all the answers. So, from a psychological perspective, it’s not that surprising that the most twisted, perverted aspect of this image would rise up among us.”

Williamson’s Campaign Manager Patricia Ewing said she has been impressed by the personal connections Iowans have made with Williamson, adding that voters feel “very worried” about the state of the American democracy.

“People are opening up about the trauma that Donald Trump has created in America,” Ewing said. “Iowans are discussing the destabilization of their government and what that means to them — it is quite eye-opening and a type of conversation you don’t see with other candidates.”

Although University of Iowa student Teagan Roeder, who was at Tuesday’s event, said he has decided to support U.S. Sen. from Massachusetts Elizabeth Warren for the Democratic nomination, he added that Williamson’s presentation was “better than what I expected.”

“She was speaking sense for the most part, but in rather unorthodox ways that I’m not used to seeing people running for these positions talk about the issues,” Roeder said.

Williamson participated in the July presidential debates, but failed to meet the polling and donor threshold required for the last two debates and hasn’t yet qualified for the debates in November.

With the Iowa caucuses just over three months away, Williamson said it is crucial to elevate the level of conversation about the issues salient to voters in the Hawkeye State.

“The political establishment is too narrow and superficial a container for the level of conversation we need to be having,” she said.