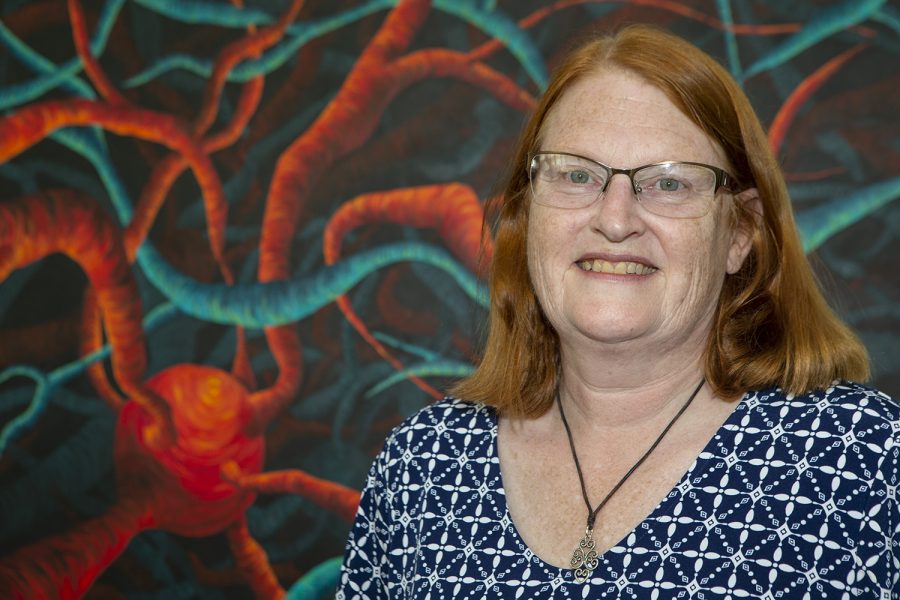 Professor of Physical Therapy Kathleen Sluka poses in front of her artwork in the Pappajohn Biomedical Discovery Building on July 29, 2019. Her artwork focuses on the life of cells.

The National Institute of Health provided two new grants totaling nearly $13 million to a diverse team of University of Iowa research professors who will address the issue of chronic pain and opioid misuse as part of its broader HEAL initiative.

The first project, the Acute to Chronic Pain Signatures Program, works to prevent chronic pain through the development of a pain signature — a pattern defined by observations of patients with chronic pain and its causes.

“What makes one person have pain may not be the same thing influencing another person,” said Laura Frey Law, UI associate professor of physical therapy and rehabilitation science.

That necessitates looking at a wide range of possible predictors through blood collection, brain imaging, and psychological assessments of pain sensitivity, she added.

The UI research team serves as the project’s Clinical Coordinating Center. Their job is to pull the efforts of the entire consortium together by standardizing data collection and basic operations, Bayman said.

Coffey added that the creation of a collaborative research space is key to fulfilling their role because of the large scale of the project.

“The culture in each field is very different, but we need to standardize things,” Coffey said.

“The second grant is a pragmatic clinical trial, which means it’s about implementation and looking at the use of some kind of treatment in a real-life setting,” said Kathleen Sluka, UI physical therapy and research science professor. “It’s not as cleaned up as it would be in a clinical study.”

Sluka’s research has focused on the transcutaneous electrical nerve stimulation model for the last 20 years. The model could ultimately lead to nonpharmaceutical treatments for those who already suffer from chronic pain, she said.

This grant funds the clinical trial necessary to prove the model’s effectiveness in a physical therapy setting, Sluka added.

Frey Law said both projects are being done at a time when alternatives to addictive and deadly opioids are needed the most.

“If we can better understand the predictors of pain — particularly chronic pain — then we can find alternative treatments that are reasonably effective,” Frey Law said. “That might reduce this opioid epidemic that we are currently facing.”

Sluka serves as the head of both projects and noted how cooperation between the UI’s two teams is essential to acquiring funding from the National Institute of Health.

“We thought this was a great partnership between the College of Health and the College of Medicine. It brought about expertise in pain science … and expertise on clinical pain trials from the [UI Clinical Trials Statistical Data Management Center],” Sluka said.

The National Institute of Health’s HEAL initiative has funded dozens of similar research projects across the country.

“One-third of the United States has chronic pain. That is a big population that we are trying to treat, alleviate and prevent for the future,” Sluka said. “The UI’s efforts are just one small piece.”