Fort Dodge native Robert Wolf recently donated the collection of fossils he’s accumulated over his lifetime, which includes pieces primarily from the Midwest. 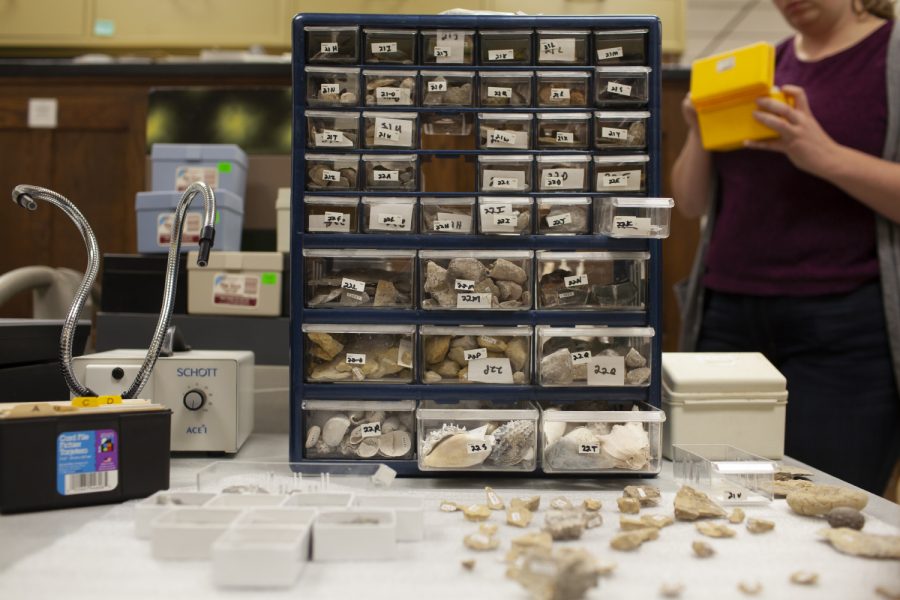 A portion of a fossil collection sits out in Trowbridge Hall on the University of Iowa campus on Oct. 15, 2019. The collection, which includes approximately 18000 fossils, was donated to the UI in August by Fort Dodge resident Robert Wolf.

Fort Dodge native Robert Wolf recently donated his 18,000-piece fossil collection to the University of Iowa with hopes that it will help students and faculty pursue research this fall.

The collection will add to a pre-existing one million plus fossils on campus.

In an email to the The Daily Iowan, Wolf said a classmate introduced him to fossil hunting in the fourth grade, and he’s collected fossils ever since.

“When I find a fossil, it is like having a souvenir from another exotic world — a world I will never be able to visit,” he said. “Fossil collecting feeds my curiosity and writing the book Fossils of Iowa helped me break into being a published author as well as giving me an outlet for my work.”

UI Earth and Environmental Sciences Collections Manager Tiffany Adrain is in charge of handling the fossil donation. She helped move the 250 boxes of bones this summer with the help of four intrigued students.

“Wolf’s collection is mostly from Iowa and the Midwest,” she said. “It enhances our existing collection. We are starting to process the collection which students will assist with so they can learn how to manage and document collections.”

Wolf documented all of his fossils on index cards and organized them into 22 boxes and two binders. This information will be cross-referenced by professionals and faculty members from the UI and other institutions after it is added to an online database, Adrain said.

UI Ph.D. student Amanda Adams was one of the students who assisted in transportation of the fossils to the university and has volunteered to further aid in documenting them.

“Amateur collections like Wolf’s are important,” she said. “It is important to make those collections public and not in private hands. A big part of science is repeatability. Putting things in public collecting is very important to the future of science.”

Adrian said she believes it is integral to have amateur collectors in different communities.

“A lot of discoveries are made by amateur collectors once they are in the hands of institutions or museums,” she said. “Sadly, it is often the case that when [a collector dies], their relatives don’t always understand the importance of the material they’ve spent their lives working on.”

Wolf said he is proud of his collection and included some of his favorite pieces in his donation to the UI. His favorites include the Cambrian Period fossils from extreme northeast Iowa, Wolf added.

“They are among Iowa’s oldest fossils, about 490 million years old following a rapid advance in life forms known as the Cambrian Explosion,” Wolf said. “Many of the life forms we are familiar with today first appeared during this time. I included these specimens in the collection because they are a significant and little-studied part of Iowa paleontology.”

Adrain said that Wolf’s collection will join many pre-existing pieces from Iowa at the UI, which includes fossils dating back to the Ice Age, as well as donations and discoveries made in the 19th Century.

Wolf said he knew Iowa City was the perfect home for his fossils because of the size of the collection.

“I knew the University of Iowa already had a large collection, and I felt that would be the best home for my collection,” he said. “Iowa has some very famous fossil beds, and I hope that students and researchers will find my collection beneficial.”