UI historian Linda Kerber, a member of the American Philosophical Society since 2006, was recently elected to serve a three-year term on its council. 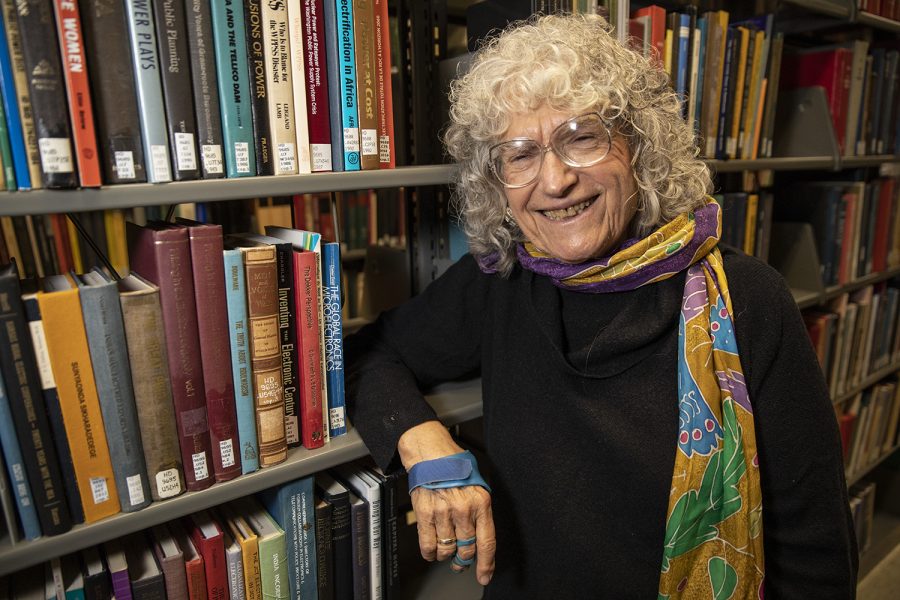 Ryan Adams for The Daily Iowa

Linda Kerber, recently elected to the Council of the American Philosophical Society, poses for a portrait in the University of Iowa’s main library on October 15, 2019. Among Kerber’s accomplishments are fellowships with the National Endowment for the Humanities, and a Guggenheim Memorial fellowship.

Distinguished University of Iowa historian, professor, and author Linda Kerber was recently named to the Council of the American Philosophical Society — the oldest learned society in the country.

Since its founding by Benjamin Franklin in 1743, the American Philosophical Society is known for its contribution to all forms of research and knowledge. Kerber is the third person from the UI to be elected to the Society, behind renowned physicist James Van Allen and former UI President James Freedman. The Society has notable members such as theoretical physicist Albert Einstein, naturalist Charles Darwin, and former President Barack Obama.

Kerber specializes in the studies of women’s history, gender, and the importance of citizenship. She has served as the president of various institutions such as the American Historical Association, was active in preparing and supporting “friend of the court” briefs cited by the Supreme Court, and has won multiple awards for her books.

“Coming of age during the women’s movement of the ‘70s, we needed to write our history,” Kerber said. “We wanted to show that there’s a history for everything, and there’s a way to find the resources from which to write it. We challenged archives to find women’s letters and journals that had often been mixed in with materials from the men of their families.”

Kerber added that she and colleagues challenged the archives further to aggressively collect the papers of women, people of color, and ethnic and religious minorities whose records had been neglected or not collected at all.

“The society is actually next door to Independence Hall [in Philadelphia],” Warren said. “The intellectual fuel that created our nation emanated in part from the American Philosophical Society.”

Many of the nation’s Founding Fathers were elected members, including early members George Washington, Thomas Paine, John Adams, and more. Both Kerber and Warren emphasized that, though its origins are an integral part of the society’s mission, its reach goes well beyond its early years.

The Society has vast archives of scientific and literary materials that chronicle the growth of intellectual knowledge since its founding, they both added.

UI History Department Chair Landon Storrs said she has admired Kerber’s work for decades.  She said Kerber was a driving force in establishing women’s history as a viable route of historic study and her recent recognition from the American Philosophical Society shows how relevant her impact has been.

“It’s a really fitting capstone to a dazzling career,” Storrs said. “It’s well-deserved, and it comes as no surprise given her many achievements. It’s something that all of us — women’s historians, University of Iowa historians — have to be proud of.”

Editor’s Note: In a previous version of this article, there was confusion as to whether the piece was referring to the Society or the Council. The errors have been corrected.