The Daily Iowan staff makes its picks for Week 8 of the college football season. 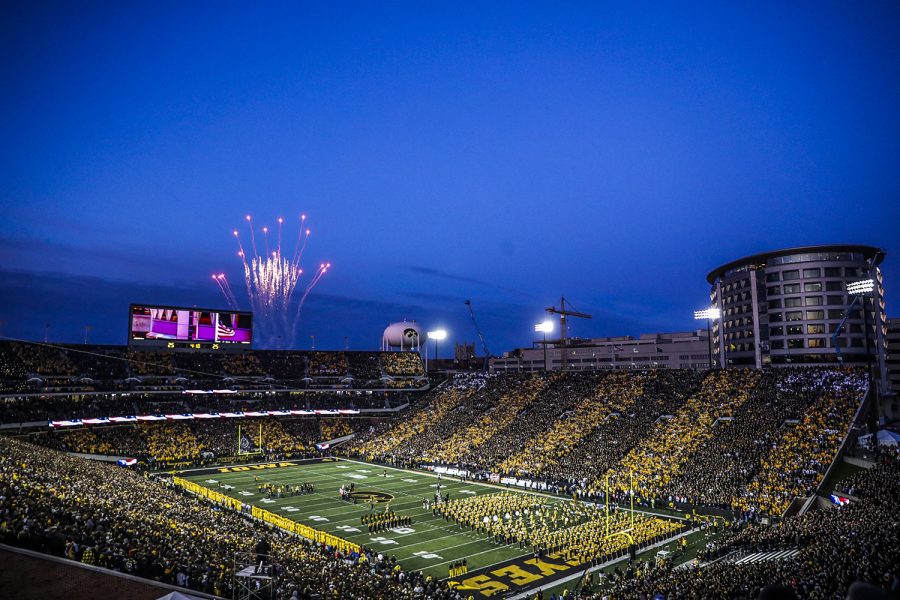 Fans prepare for the Iowa football game against Penn State in Iowa City on Saturday, Oct. 12, 2019. The Nittany Lions defeated the Hawkeyes 17-12.

Pete Mills, Football Reporter (15-15): Iowa — Iowa lost without Nate Stanley’s goatee, and it also lost with the goatee, so I don’t know how to predict games.

Read: Oregon — The Oregon Duck is an elite mascot

Mills: Oregon — I can’t watch Pac-12 games because I go to sleep too early, so I’ll just take Oregon.

Rohden: Oregon — Get your insurance needs with Aflac!

Brummond: Oregon — The Oregon Duck and Harry the Husky Twitter feud is legendary.
No. 7 Penn State vs. No. 16 Michigan
Ruden: Penn State — Penn State can be pretty good in night games apparently.

Read: Penn State — ICYMI: Both of these teams beat Iowa.

Rohden: Penn State — Penn State will win if it gets more than one net rushing yard.

Rawson: Penn State — My sadness continues to mount with College Football, much like Penn State up the rankings.

Brummond: Penn State — They can compare notes on how bad Iowa’s offense has been in October.
No. 13 Utah vs. No. 17 Arizona State
Ruden: Utah — Time for the Utes to celebrate at the Utah bars with their 2-percent beer.

Kayser: Utah — What exactly is a Ute?

Rohden: Arizona State — I ain’t betting against the Devil, no freaking way.

Rawson: Utah — I almost went to Arizona State, but here I am. Roll Utes.

Brummond: Utah — I’m told Utah is the Iowa of the Pac-12. Works for me.
Hawaii vs. Air Force
Ruden: Hawaii — The Air Force battling the Rainbow Warriors sounds like something you read in a history book.

Kayser: Air Force — I’m convinced Pete threw this in here to throw us all off.

Mills: Hawaii — Good thing Air Force has planes. It had to get to Aloha Stadium somehow.

Rohden: Air Force — It feels wrong picking against a team with a mascot that’s a rainbow warrior.

Brummond: Hawaii — I’ve never been to Hawaii or the Air Force.