Two shows in their second years, Succession and Lodge 49, are different in content yet consistent in quality.

Succession and Lodge 49 are polar opposites on how one deals with cynical media moguls, while the other is about the mystical ventures of the working class. Both turn to the top of their game in their second seasons. 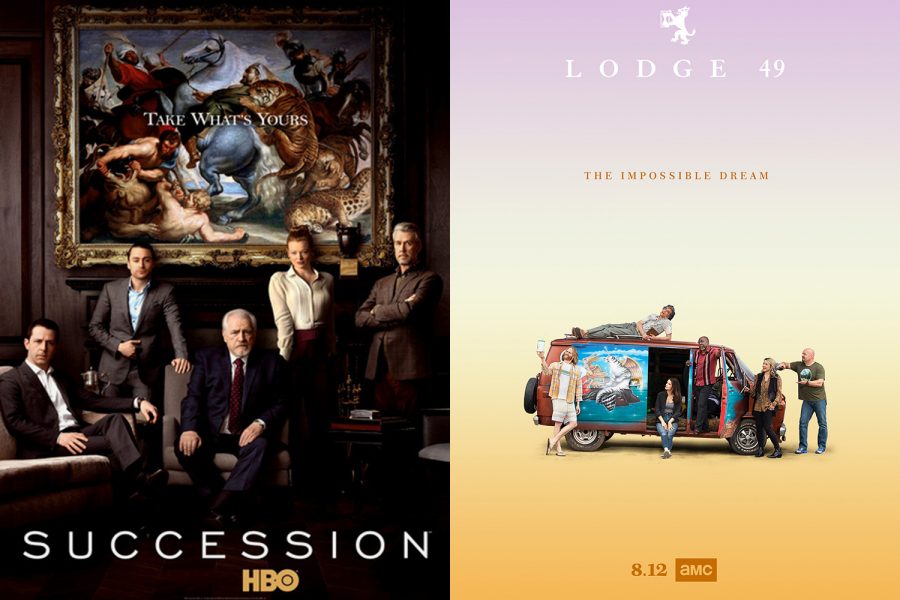 In their second seasons, both HBO’s Succession and AMC’s Lodge 49 up the ante of their respective storylines. Each depicts two sides of the same coin of capitalism: from the earners of fake news to the average working-class stiffs unlocking ancient secrets.

In its second season, Succession has now entered the ranks as one of the greatest dramas on television. Creator Jesse Armstrong’s continuation of the Murdoch-inspired clan, the Roys, is an achievement in Chekhovian character development.

The twisted Roy clan, led by patriarch Logan (Brian Cox) who is CEO of Waystar Royco, is a fictional counterpart to News Corp (the owners of Fox News). Each of his children aim for the throne, from the fragile and once-heir Kendall (Jeremy Strong), the intellectual, yet devious Shiv (Sarah Snook), and the snarky and sharp-tongued Roman (break out Kieran Culkin). Each aspires for their father’s seat, showing no remorse to one another during the backstabbing process, (though they’ll usually remember their family).

Season two consists of episodes which fall in line with TV’s short story artform (similar to that of Mad Men’s “The Suitcase”). There’s the Jean Renoir-like chapter “Hunting” and the instant classic “Tern Haven,” which follows the Roys and their attempt to woo the family owners of a respected news company (similar to Rupert Murdoch’s acquisition of The Wall Street Journal from the Bancrofts).

Related: Spirits, Demons, and clowns: Supernatural’s final season kicks off with a bang.

Viewers tune in every Sunday, no matter what evil they committed the previous week. Kendall, who after failing to unseat his father the previous season, now only seeks retribution from him. This includes doing his father’s bidding, such as letting go of hundreds of workers from an online company Waystar bought in the first season. The Roys are evil, and the viewers know this. Yet they’re far more compelling than the pulpy fabrications from House of Cards or the teenage fantasy vigilantes in Mr. Robot because unlike other dramas, Succession remembers its deals with human beings, no matter the lowest depth of their actions.

In its second season, Lodge 49 continues to be an oddity in today’s television landscape. It’s about the working class in Long Beach, California, whose ventures lack the normality and timid nature of their occupations. Cheering for them, but caring as well.

The episode “Le Reve Impossible” was a hell of a lot more fun than any of the summer blockbusters this year. In a journey to search for scrolls pertaining to their fraternal order, Dud and some of the lodge’s members travel to Mexico. There’s a sequence where one of the protagonists steals a bowling bag filled with the scrolls and jumps through fire while dressed as a mariachi, all while the Soundcarriers rendition of “The Seventh Seal” is played in the background. It’s hilarious, cinematic, and just plain fun.

The characters in Lodge 49 live the simplest of lives, but once they enter the Lodge, they’re no longer attached to reality, they turn into actual medieval figures as they refer to themselves in the fraternity. This isn’t just a comedy, it’s an Indiana Jones like adventure with protagonists who are similar to that of your next-door neighbor. They’re average, but their adventures are epic.

Viewers stick with both shows for very different reasons. The Roys are vicious and stand over the unfortunate, the members of Lodge 49 are the unfortunate, yet they always seem to find a road to happiness. One would like to know who’s is the more appealing protagonist, the rich or the poor, but with Succession and Lodge 49 why does it matter when they both accomplish the same thing: to entertain?