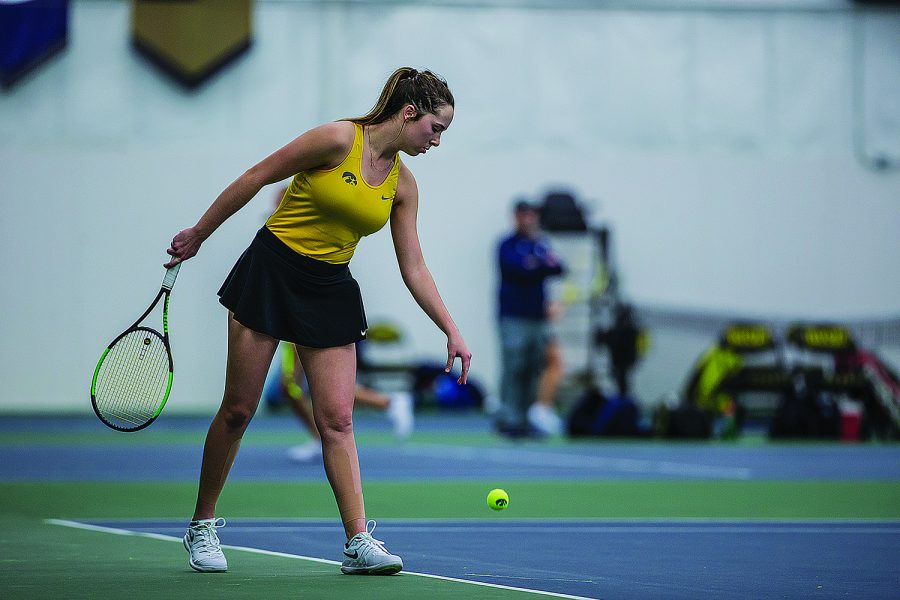 Iowa's Samantha Mannix prepares to serve during a women's tennis match between Iowa and Xavier at the Hawkeye Tennis and Recreation Center on Friday, January 18, 2019. The Hawkeyes swept the Muskateers, 7-0.

The highlight of the Hawkeyes’ fall session is upon them. Norman, Oklahoma, will be the site of the biggest event Iowa women’s tennis will compete in this fall.

While ITA Regionals won’t be Iowa’s last event of 2019, it will likely be the most important event they compete in before winter break. This is not a sign of disrespect to the Florida International University Invitational, but rather a respectful nod to the Intercollegiate Tennis Association.

Any time the ITA name is attached to an event, it adds a certain amount of prestige to it. ITA events are known for steep, unrelenting competition. Iowa is looking forward to the excitement ITA events generate.

“We are all really excited to get to regionals,” junior Danielle Bauers said. “We have been training hard and had an intense week of practice so far and last week. Everyone is ready. I think everyone is excited.”

For the Hawkeyes, this weekend’s ITA Regional event could serve as a good measuring stick for where the program is at. Should the Hawkeyes perform well over the weekend, it will become evident that they are doing something right. Conversely, if they perform poorly, they will be able to identify areas that need to be improved.

“I feel like we’re on a very good start to the year,” sophomore Michelle Bacalla said. “We feel like we have a lot more room to grow, but we’re on the right track.”

It is no secret that Iowa’s goal is to make the NCAA tournament this spring. The Hawkeyes have not shied away from their own expectations.

“I think we’re really close,” sophomore Cloe Ruette said. “We’re close to a lot of teams. I think if we get over that hump, we’ll definitely get there. We just need to keep fighting and keep working hard.”

Iowa will see many of the teams clouding its path to an NCAA tournament berth this weekend. While the event does not have the national prowess of most ITA events, it boasts the best the Midwest region has to offer.

Familiar Hawkeye foes will flock to Norman to prove they deserve an elite distinction and a spot in the NCAA tournament. If Iowa wants to make the NCAA tournament, finding some success this weekend will certainly help build its résumé.

“Regionals is always a great test during the fall season,” head coach Sasha Schmid said. “It’s a tournament you have to play well in, because you have the best players in the region. I think we will have a lot of great competition. We are trying some new doubles teams, so it will be [kind of] fun to see how that turns out. With only three fall tournaments, it is nice to compete again and have an opportunity to test ourselves outside of practice.”

As Schmid hinted, the time for practice is over. Stiff competition has arrived, and Iowa needs to be ready for it.

The talent Schmid’s Hawkeyes possess is indisputable. Now, they must utilize that talent to make the first push toward an NCAA tournament berth. Everything is in place for a storybook Hawkeye season, and the first chapter will be written this weekend. From this point on, the Hawkeyes control their own destiny.