The Iowa City City Council scheduled a public hearing on Nov. 4 to hear from the community about intersection improvements at Burlington and Madison Streets. 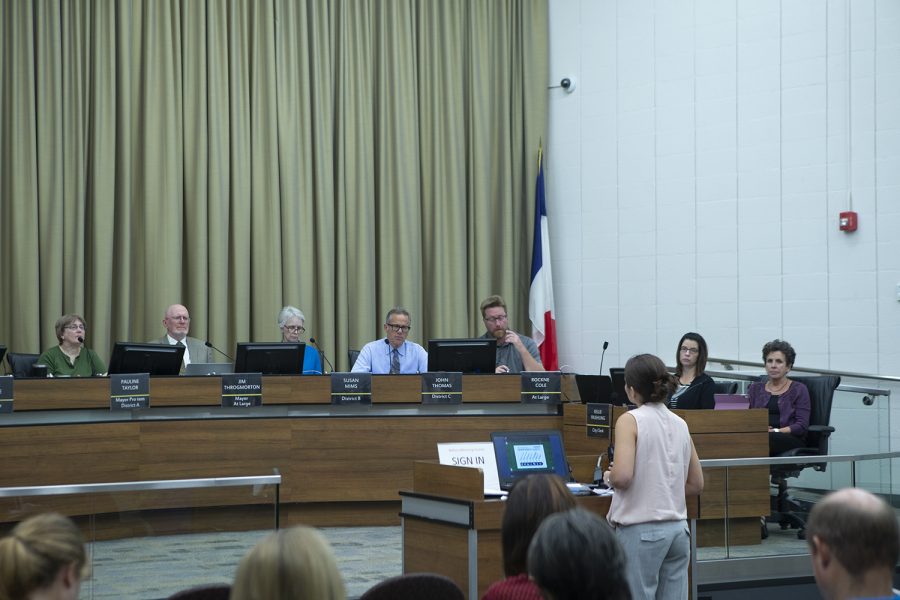 Council members listen to an advocate for cannabis legality during a city council meeting at City Hall on Tuesday, October 1, 2019.

At their meeting on Tuesday night, the Iowa City City Council passed a resolution to schedule a public hearing for discussion about improvements at the intersection of Burlington and Madison Streets.

The hearing will occur Nov. 4 and discuss the intersection improvement project and cost, which totals to an approximate $1.4 million, according to City Council documents.

If the proposed plan passes in the hearing, construction would allow for the widening of Burlington Street, with work beginning at Madison Street. In addition, continuous buffered-bike lanes would be installed at the intersection, and improvements would be made to crosswalks to improve the safety of pedestrians, the documents read.

These bike lanes would stretch from the intersection at Madison and Burlington to Riverside Drive in an effort to create a safer experience for bikers trying to cross the river, according to the project outline.

Sidewalk improvements that comply with the American Disabilities Act and public utility improvements would also be installed at Burlington and Madison Streets, project documents said.

Iowa City brought Anderson-Bogert Engineers back in 2017 to revisit the project and submitted the full design to the Iowa Department of Transportation by last month. If the resolution is passed after the public hearing next month, bid letting would begin Dec. 17.

“The project will be bid through the [Iowa Department of Transportation], but construction administration and inspection will be performed by the city,” the project document read.

As previously reported by The Daily Iowan, the construction for the new, $50 million Stanley Museum of Art lies parallel to Burlington and Madison Streets. University of Iowa Senior Vice President of Finance Rod Lehnertz previously told The Daily Iowan this location makes the museum more central to the library.

Construction for both the Stanley Museum of Art and Burlington and Madison Streets improvements would overlap. The intersection, if approved, is projected for completion by fall 2020, and Stanley is expected to be finished by spring 2022.