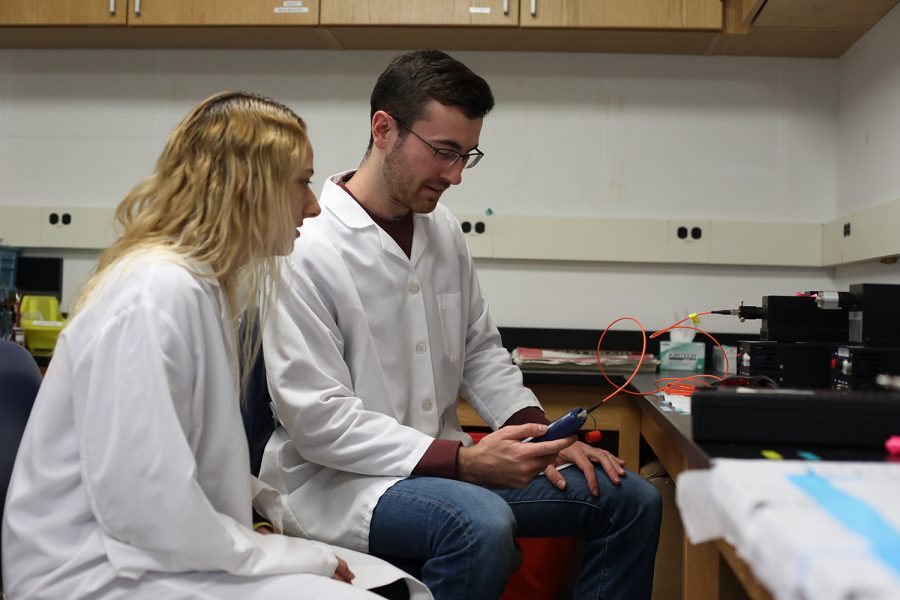 Matt McGregor demonstrates how to use some of the lab equipment on Monday, October 7.

In 2005, Ryan LaLumiere dabbled in studying the connection between the brain and heroin in a lab at the Medical University of South Carolina. When the opioid crisis’ second wave hit the U.S. five years later, LaLumiere ran his own lab at the University of Iowa and geared all his efforts toward investigating cocaine and heroin relapse.

LaLumiere, an associate professor in the psychological and brain sciences department, recently earned a five-year, $2.13 million grant from the National Institute on Drug Abuse to support his proposed study.

He will analyze neural circuits — signals sent between brain neurons to complete tasks — and changes in these circuits to find which circuits inhibit heroin relapse and which promote heroin-seeking, LaLumiere said.

“Relapse is the big problem in drug addiction,” LaLumiere said. “We can get people to stop taking it for a while, but then they go right back to it.”

LaLumiere said his team will explore this hypothesis with the new grant. The lab’s end goal is to better understand drug-seeking behaviors in the brain, he said, and eventually be able to use non-intrusive brain stimulation to alter these behaviors.

For more than a year, Undergraduate Research Assistant Vanessa Alizo has assisted the graduate students in LaLumiere’s lab. Her tasks include rat husbandry and transcribing and analyzing data.

“[The project] has impacted [my future career] a lot since I’m currently applying for graduate school. I’m looking to work in this same area,” Alizo said.

As she applies for schools on the west coast, Alizo said she hopes to shift her focus from drug-seeking to food-seeking.

“When we think about college-aged students, your prefrontal cortex is not yet developed,” Beecher said. “What happens with substance use is your neural pathways can actually change, so someone who has addiction can be more susceptible to drug use later on in life.”