The Hawkeyes fought back after an early deficit but would still fall to the Wolverines Friday night. 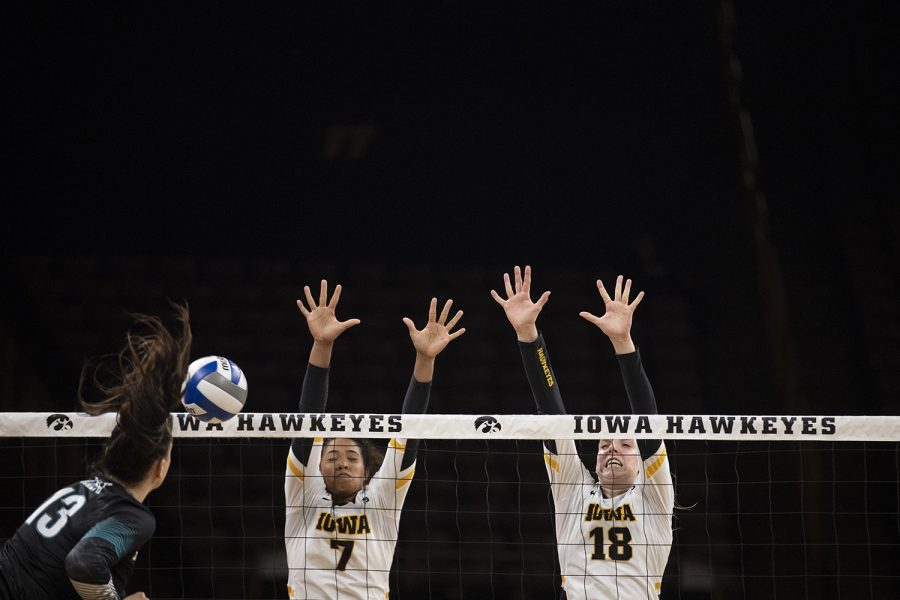 Iowa’s Brie Orr and Hannah Clayton jump up to block a spike at a volleyball game against Coastal Carolina at Carver Hawkeye Arena on Friday, September 20, 2019. The Chanticleers defeated the Hawkeyes 3-1.

The cause was not the only thing that was great in Iowa City this evening. The Wolverines were also fantastic. Michigan was able to extinguish Iowa in four sets behind the stellar play of Sydney Wetterstrom, who posted an impressive 16 kills on the evening.

While Michigan got the win, the Hawkeyes certainly showed an impressive amount of determination. After getting dominated by Michigan in the first two sets, Iowa took the third set 25-19. The Hawkeyes also pushed Michigan to the brink in the fourth set, eventually losing 25-23.

Much of the Hawkeyes’ mid-match turnaround can be attributed to their young players. Hannah Clayton, Joslyn Boyer, Courtney Buzzerio, Maddie Slagle and Edina Schmidt all played a large role in Iowa’s late push in the second and third sets.

“They’ve always been ready to step up,” head coach Vicki Brown said. “That’s always been our conversation with them. Hey, it’s a very thin line between who’s starting and who’s not starting.”

The biggest surprise of the evening for Iowa came from Kyndra Hansen. Hansen, a freshman, stepped in and recorded five blocks on the night.

“I thought Kyndra did a good job,” Brown said. “We always knew she was a strong blocker, but to add the different components of the game as far as attacking and off blocker defense, I thought she did good there.”

The Hawkeyes will need to put Friday’s heartbreaking loss behind them quickly. Michigan State will travel to Carver-Hawkeye Arena on Sunday for a matchup at 1:00 p.m.

“We’re looking forward to that,” Brown said. “We’ll work on our shot variation so we can attack.”