With the University of Iowa drawing closer to selecting a partner to manage its utilities, President Bruce Harreld hinted at future partnerships Thursday afternoon. 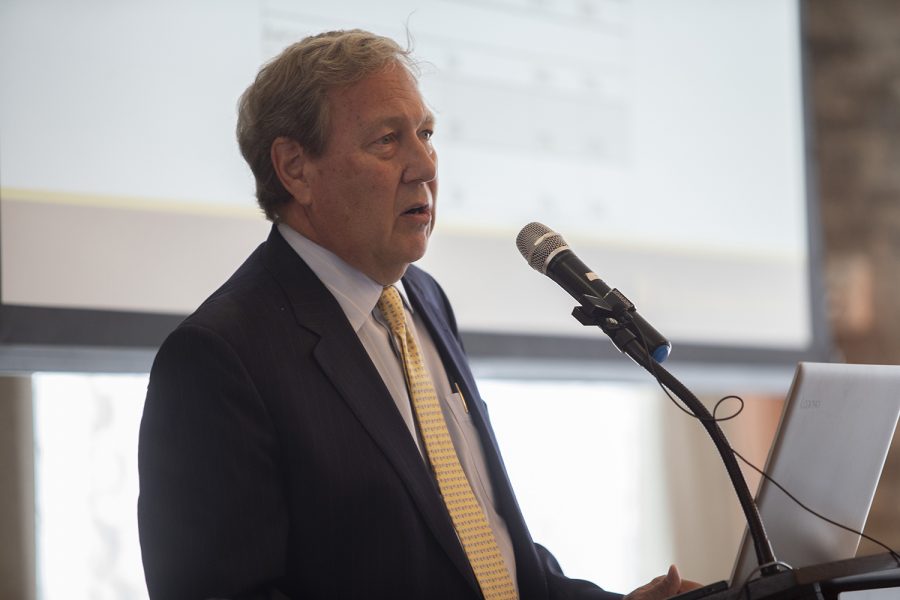 UI President Bruce Harreld gives a presentation during a Rotary Club lunch on Thursday, Oct. 10, 2019. The presentation went over topics such as the class of 2023, first-generation students, and the public-private partnership.

For the University of Iowa to push forward in the face of dwindling state appropriations, UI President Bruce Harreld hinted at the possibility of additional public/private partnerships at the State of the University address on Thursday.

Speaking before the Iowa City Noon Rotary Club, Harreld suggested there could be more of such potential partnerships between the UI and private companies in addition to the potential multimillion-dollar utilities partnership announced in February.

“If the state starts to deappropriate us as they have over the past 20 years … then we’ll have to scramble even harder,” Harreld said. “In anticipation of that, we’re looking at doing something similar to this in a number of other areas.”

At Thursday’s address, Harreld said the list of potential partners has narrowed from over 100 firms to a handful. He said the “massive upfront payment” from this partner would help fund the UI’s strategic plan, tuition, state appropriations, and reallocation.

“If [the public/private partnership] initial effort is successful, this could provide a blueprint for future opportunities for other institutions and even possibly other branches of state government,” Richards said.

The financial gain from this partnership, Harreld added, could also help students’ graduation rates and increase the UI’s rankings in the U.S. News and World Report. Although the university moved up four spaces this year, Harreld said this essentially “moved [the UI] from the bottom to the bottom.”

“It’s a serious issue for us … and these are issues that we stare at every day, and we’re really focused on [how] we don’t want to chase the rankings, but they are actually a pretty good set of metrics,” he said. “They keep us sharply focused on things that matter. And these are used as families, certainly my family use them when we start thinking about our children.”

Despite public backlash about the environmental-friendliness of a potential utilities partnership, Harreld iterated the UI’s commitment to being coal-free by 2025. Potential partners, he added, must follow environmental guidelines previously established by the university.

At the Tuesday Graduate and Professional Student Government meeting, Sustainability Committee co-chair Christian Bako said the university is in the final stages of selecting a partner, emphasizing the importance of sustainability.

“One of the barriers of entry for these bidders that are interested in entering a [public/private partnership] with the university is that they need to commit to getting the university Power Plant off coal by 2025, so no more burning coal,” Bako said. “All the bidders in the final stages have committed to doing that. Some are even accelerating that timeline to 2023.”

In an email to The Daily Iowan on Wednesday, UI media-relations director Anne Bassett said in a statement that the university is still very much in the exploration phase of public/private partnerships.

Looking forward, Harreld said these possible partnerships have the potential to assist universities in a number of ways.

“What this is really all about quite frankly is unlocking the value that’s on our campus and has been there for a long, long time,” he said.