UISG has been working on a website that empowers University of Iowa students to interact with them more. This platform offers students an opportunity to ask for and see the change they want at the university. 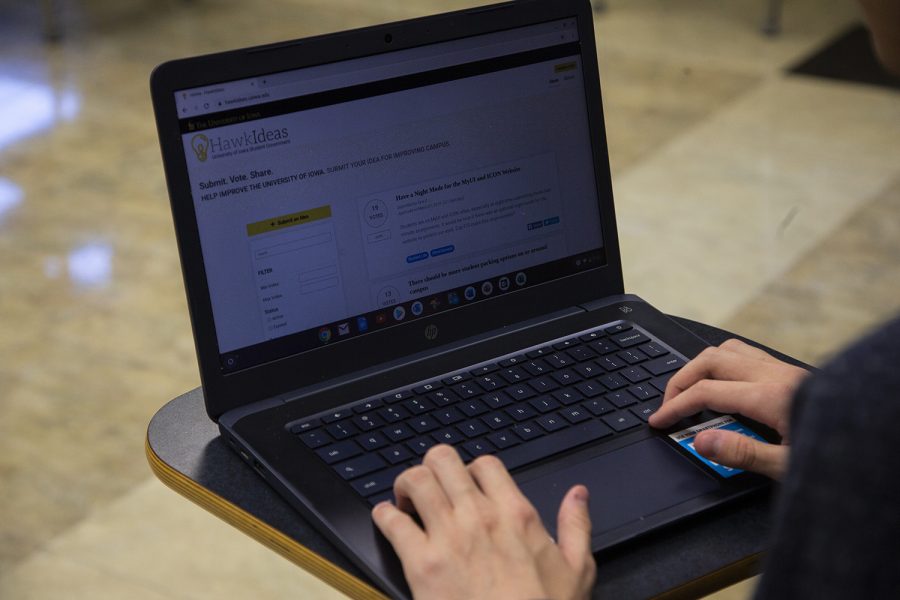 University of Iowa Student Government has created an outlet for students to share their ideas through their new website “Hawk Ideas.”

UISG published the “Hawk Ideas” website this fall. Former UISG Cabinet Director Kyle Scheer began the process of its creation last academic year. In an email to The Daily Iowan, Scheer said the website started as a way to amplify student voices and create an online space that allowed UISG to continue serving the student body in the best way possible.

The current student lead on the project who successfully helped launch the page is UISG Cabinet Director Colin Lakadat. Lakadat said he believes “Hawk Ideas” to be a brilliant idea itself and he was excited to see it come to fruition.

“I saw it as a good avenue for students and a lot of work had been put into it,” he said. “It’s a site where you can submit any idea or thought you have for a change that is needed on campus or any aspect of the university or community as a whole.”

After an idea is submitted, Lakadat said, students can vote for it — like signing on to that petition. If an idea generates enough votes, then UISG is mandated to respond to it, he added.

This project would not have been possible without the assistance of Information Technology Systems on campus, Lakadat said. Lead Application Developer Kerri Mead as well as Senior IT Project Manager and IT Business Analyst Gayle Elliott at ITS have been on board since the project’s beginning.

“Scheer approached us about a year-and-a-half ago after seeing similar sites at other universities,” Elliott said. “He wanted to offer that opportunity for Iowa students.”

Mead said he had a vision for the site’s appearance and how it could help students share their ideas.

“UISG wished the site was up earlier to get feedback sooner,” she said. “[UISG and ITS] wanted to make something really clean and responsive as well as accessible to students.”

“Hawk Ideas” was posted at the end of the spring 2019 semester, and new ideas have been generated this semester. Scheer said the process was difficult and ongoing for a long time and suggested it’s time for more UI students to know about it.

Scheer thanked a myriad of ITS staff and student developers for their contribution to the project, citing that it would have been impossible without their support.

“The only way ‘Hawk Ideas’ works is if students participate,” he said. “The best way to get involved is to share and vote on ideas you care about and tell your fellow Hawks about it.”

Lakadat said it was important that the website was accessible to every student so that UISG is supporting and assisting everyone — and not just the people who can make it to their Tuesday meetings.

“It’s one of the best avenues for students to put their ideas out there,” he said. “Truly, we are representing the student body. All ideas are accepted and valid. We want to hear about how [students] think we can improve campus.”