At their meeting on Tuesday evening, the Graduate and Professional Student Government discussed committee assignments and filled vacancies on the executive board of the organization. 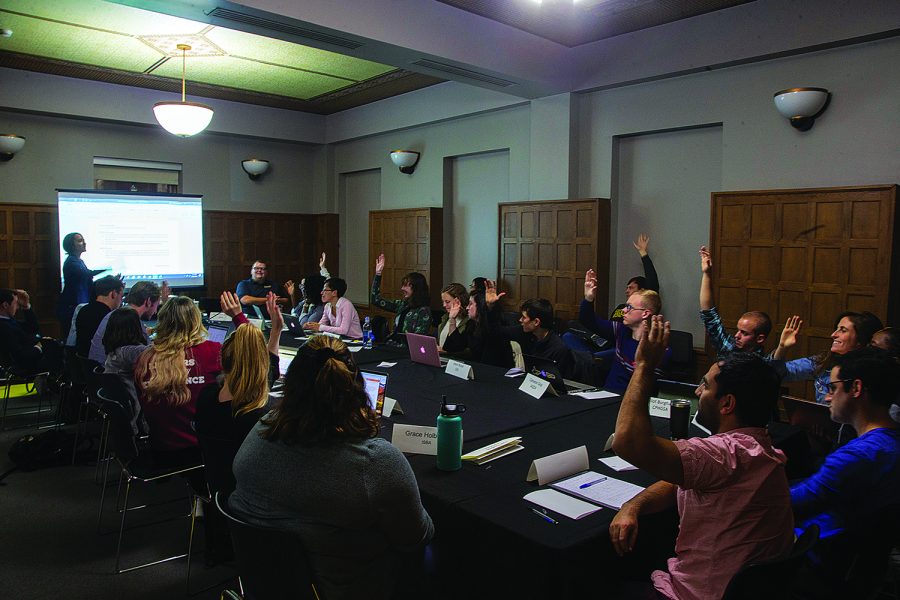 GPSG members vote on funding movement at the University of Iowa GPSG meeting in the IMU on October 8th, 2019.

A member of University of Iowa Graduate and Professional Student Government said in a meeting Tuesday night the UI will soon select a bidder in its exploration of a public/private partnership.

In the meeting in the IMU, GPSG Sustainability Committee co-chair Christian Bako commented on the potential partnership at the UI, which would allow the university to collaborate with a private company and financially benefit from its own utility system.

“I’ve been focused on the [public/private partnership] negotiations that have been going on with weekly conference calls,” he said. “The bidders are finishing their bid materials and the final bidder is supposed to be selected by Nov. 15. It’s a fast-moving process.”

In an email to The Daily Iowan, UI Media Relations Director Anne Bassett said in a statement that the university of Iowa is still only exploring a public/private partnership involving its utility system.

“A decision to move forward beyond the exploration phase has yet to be determined by the campus team, which includes shared governance,” the statement read.

As previously reported by The DI, UI President Bruce Harreld said at the state Board of Regents meeting Sept. 19 that the university is primarily considering a public/private partnership as a complementary revenue source to tuition, state appropriations, and reallocation.

Harreld told the DI Sept. 23 that in the previous week, he was “in other parts of the world trying to deal with the [public/private partnership] and meeting all the companies that are bidding.”

UI Chief Financial Officer and Treasurer Terry Johnson attended a GPSG meeting in March to address any concerns by the organization about a public/private partnership. As previously reported by DI, Johnson answered questions about costs and the university’s commitment to its goal of operating coal-free by 2025.

“One of the barriers of entry for these bidders that are interested in entering a [public/private partnership] with the university is that they need to commit to getting the university Power Plant off coal by 2025, so no more burning coal,” Bako said. “All the bidders in the final stages have committed to doing that. Some are even accelerating that timeline to 2023.”

Bako emphasized that a speedier timeline for the university’s coal-free goals is something that the university is working on, and the companies that are pursuing a public/private partnership are committed to that goal.

“We get to explore more broad biomass markets,” Bako said. “That means renewable fuels to burn in the Power Plant rather than coal.”

In addition to discussing the agreement, GPSG also moved to unanimously pass spending guidelines for its second cycle.

“We had 32 applications from 22 student organizations for funding this cycle,” she said. “We declined all undergraduate [organizations] because of new guidelines created last year and cut any organization that hit our cap and those that didn’t specify what the money was for.”

“We received a climate action grant for $5,000 to fund this project,” Bako said. “We have seven members, and we will each be reaching out to two restaurants. These restaurants will give us climate conscience menu items and we will compile them into a book.”

He explained that local Iowa City restaurant Cortado is on board and submitted an item for the passport to include. Following suggestions from other GPSG members, the committee will look into adding reminders about sustainable take-out options as well as a planned interactive map to the passport.