Hawk the Vote recently released a report portraying an increase in voter turnout and registration between 2014 to 2018. The organization will now team up with UISG to provide further education for upcoming local elections and presidential caucuses, so students are well- informed at the polling booth. 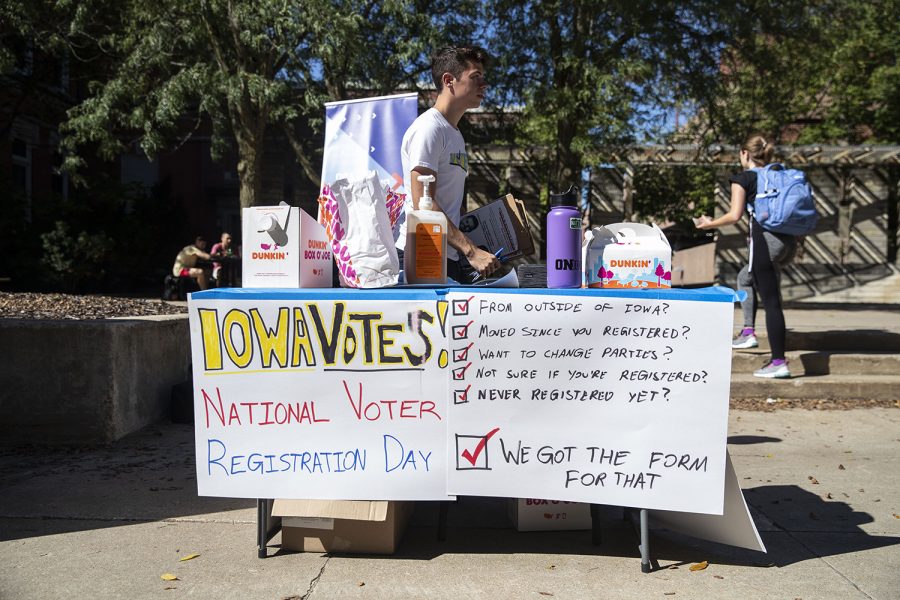 Anthony J. Zarzycki stands behind the “Iowa Vote’s” table to help students sign up to vote on the T. Anne Cleary on Tuesday Sept. 24, 2019. Today is national voter registration day.

As thousands of college students across the U.S. celebrated National Voter Registration Day in September, more than approximately 204 students registered to vote on the University of Iowa campus — just in time for upcoming local and federal elections.

According to a report by Hawk the Vote, voter turnout increased by 16 percent on the UI campus in approximately four years. In 2014, around 28.9 percent of students turned out to vote in elections — a number which increased to 44.9 percent by 2018.

UI student voting turnout mirrors a similar trend found nationally in college voter turnout — 19.2 percent of all college students voted in the 2014 midterm elections, and 39.1 percent turned out in 2018, according to a Tufts University study.

Roof said that data translates to nearly 5,000 more students turning out to vote in a span of four years, which is significant as the election cycle prepares to kick off in November with Iowa City City Council elections and the 2020 Iowa caucuses.

RELATED: Race for young supporters is on ahead of 2020 presidential caucuses

In preparation for both elections, Hawk the Vote will team up with UI Student Government for a Meet the Candidates event featuring all of the candidates for City Council.

UISG City Liaison Austin Wu said the event aims to provide students with an opportunity to get to know potential local elected officials and establish a direct connection with them to better understand their effect on Iowa City.

“Civic engagement leading up to the [last] election was a big goal at the entire university,” Wooff said.

UISG needs to help students who may not recognize their connection to government as clearly as others, Wooff said. For example, he added, the organization could reach out to specific areas on campus such as the College of Engineering to teach students how to get civically engaged and be an active voter.

“I think we could increase voter turnout in so many areas where it’s not usually touched,” Wooff said.

In their partnership, both UISG and Hawk the Vote are committed to helping prepare and educate students on the upcoming 2020 election cycle. The pair will also host a mock caucus so students can experience caucus day before the real deal comes to Iowa.

Wooff added that both organizations will co-host a campaign speed dating event, where students can go table to table to learn about each candidate without the pressure to commit to a campaign.

Roof said their current voter registration rate is at 72 percent, and that Hawk the Vote’s goal is for 60 to 70 percent to turn out to vote in the 2020 election.

According to the National Study of Learning, Voting, and Engagement, the UI voter-registration rate sat at 72.1 percent in last year — an increase of 2.4 percent from previous data in 2014.

The same study showed 57 percent of students voting in-person on election day and 39.2 percent voting via absentee ballot in 2018.

Roof emphasized that the percent of undergraduate students who voted in 2018 rose 16 percent from previous years, and her organization hopes to keep that number high in 2020. Based on previous projections and its report, Roof said Hawk the Vote is optimistic for 2020 voter turnout.

“A percentage increase [this great] across the board is truly remarkable,” Roof said.