What Iowa’s political leaders have said about climate change

With Greta Thunberg in Iowa City Friday, The Daily Iowan looked at past statements from Iowa politicians about climate change. 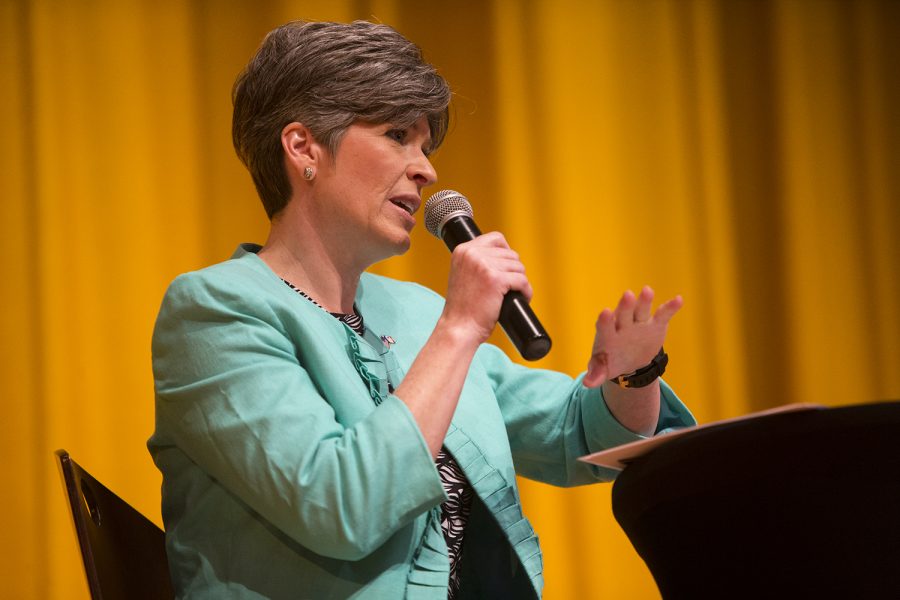 Sen. Joni Ernst, R-Iowa, speaks during a town hall meeting in Sinclair Auditorium in Cedar Rapids on the Coe College campus on Friday, March 17, 2017. Ernst is completing her 99 county tour and will speak again in Des Moines at 5 p.m. at Drake University.

“The problem is statewide too. We are going through record flooding. Last year greenhouse gases raised 3 percent. Gov. Reynolds?” one high schooler asked of the crowd on the corner of Dubuque and Iowa Avenue, which numbered into the thousands.

“No more excuses,” the crowd chanted back.

Historically, Iowa has been a beacon for wind energy and the renewable fuels industry, with bipartisan support for those measures popular among top Iowa political leaders.

But, where differences begin to split is over climate change. Although Thunberg herself didn’t mention Iowa specifically, high schoolers and Bolkcom called on Iowa government officials to be explicit about their plans to address climate change.

The Daily Iowan looked at Iowa politicians past statements and actions addressing climate change.
Governor’s office
In 2009, Iowa’s governor Chet Culver, a Democrat, commissioned a report on climate change. The 2010 report, available online by the Iowa Department of Natural Resources, laid out how climate change could affect Iowa — leading to additional rainfall that could cause increased flooding. That committee was disbanded on July 1, 2011 — after Republican Gov. Terry Branstad won the 2010 election.

A spokesperson for Reynolds did not respond to a request for comment by the time of publication.

During the third debates when Reynolds was running for governor almost a year ago, she answered a question about whether the contenders “agree with climate change and the reported effects across our globe.”

“While I think it’s a factor, I think it’s over stated,” she said Oct. 21, 2018. “I think we’re (Iowa) working hard every day to do our part, especially when it comes to renewables (wind, ethanol, biodiesel, cellulosic).”

Iowa’s Attorney General, Democrat Tom Miller, said Reynolds didn’t allow him to sign onto a lawsuit with 21 other states to sue the Trump administration over a relaxation of restrictions on coal plants.
Iowa Secretary of Agriculture
On a taping of Meet the Press on Iowa Public Television May 24, Mike Naig, Iowa’s Secretary of Agriculture, said there was “no doubt that the climate changes.”

“Farmers have to be resilient in the face of increasingly larger rain events in the spring — which we have been seeing — and we’ve got a slight warming that we’ve seen as well,” he said. “And by the way these trend lines don’t continue forever, so we should watch that data as well.”

He also said climate change shouldn’t be politically charged, and that farmers should be looking at cover crops to prevent soil erosion.
Congress
Sen. Joni Ernst, R-Iowa, was asked whether she believed humans were the primary instigators of climate change during an Iowa forum Oct. 3. Afterward, to reporters, she highlighted Iowa’s renewable energy industry and criticized environmental proposals that would upheave the U.S. economy like the Green New Deal.

“I think there is probably a contribution there (by humans). But again, if we wipe all industry off the face of the Earth, our climate is still going to change,” Ernst said. “…Climate has been changing since the dawn of time, but can we be better stewards of the environment? Of course we can.”

Ernst was also asked about climate change twice during the town hall and whether humans are causing it. “I think there is probably a contribution there. But again if we wipe all industry off the face of the Earth our climate is still going to change,” Ernst told reporters after. pic.twitter.com/YYzykYCkjU

Sen. Chuck Grassley, R-Iowa, often jokes that he is the father — or, by now the grandfather — of the wind-energy tax credit. Authored by Grassley in 1992, the Production Tax Credit offered incentives for wind developers to build wind farms nationwide. Like other Iowa members of Congress, Grassley touts policies supporting renewable energy and diversified crops on his website as pro-environment policies.

Grassley earned a 0 percent rating from the League of Conservation Voters for his 2018 record. The group cited his support for President Trump’s nominee Andrew Wheeler to head the Environmental Protection Agency and loosening regulations on gas industries.

The League of Conservation Voters compiles environmental votes and gives members of Congress a ranking on what percentage of their votes are pro-environment.
2018 ratings

Iowa’s newest representatives, Cindy Axne and Abby Finkenauer, both Democrats, don’t yet have a score from the LCV since they didn’t take office until 2019. The league did endorse both Axne and Finkenauer as they sought office in 2018.

Support for the Green New Deal, authored by Democratic Rep. Alexandria Ocasio Cortez and one of the most aggressive proposals to address climate change, has received little support in Iowa, even among Democrats.

None of Iowa’s three Democratic representatives have co-sponsored the 14-page non binding resolution, and Grassley wrote an op-ed in the Des Moines Register June 12 calling the Green New Deal “riddled with poison pills.”

On Finkenauer’s energy and environment page on her website, she doesn’t include the words “climate change,” but she does list her support for renewable energy such as wind, sun, and biofuels.

In an interview with the DI in the spring, she connected the spring Iowa flooding to climate change.

“[Climate change is] a cause whether it’s wildfires in California or heavy snowfall or even changing to earlier winters and cutting down on harvest season,” she said in an interview March 27 with The Daily Iowan.

In a tweet, Axne, who is on the House Agriculture Committee also connected Iowa flooding to climate change.

“Climate change is real. We see it right here in #IA03. Droughts are a yearly strain on our food supply & put farmers at risk.”

Climate change is real. We see it right here in #IA03. Droughts are a yearly strain on our food supply & put farmers at risk. Iowa needs to be the renewable energy leader it can be by protecting our rural communities, our environment & fighting for green jobs. #iapolitics #

In an April forum, Iowa’s 4th District representative, Steve King, pointed to a “good” side of climate change, saying that climate change could lead to shrinking deserts according to the Sioux City Journal.