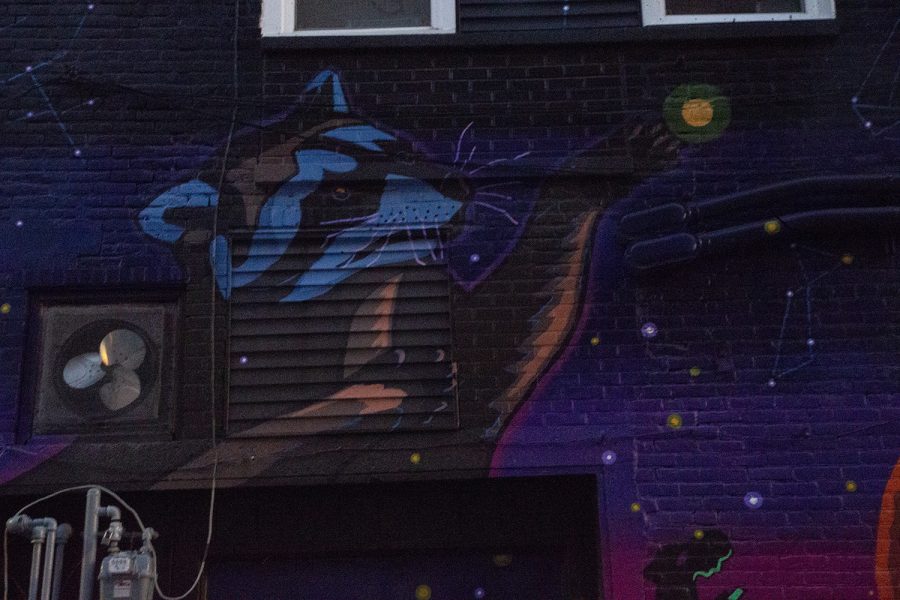 The Raccoon and the Firefly in the alley beside US Bank in Downtown Iowa City on October 7, 2019. (Raquele Decker/The Daily Iowan)

Iowa City is home to many colorful street art, ranging from massive to small. With all types of diverse murals, the Iowa City Public Library hosted an event Monday evening to show off the newest additions to the downtown area.

The event was guided by Iowa City Downtown Director of Public Art and muralist, Thomas Agran.

“Murals are very democratic, anyone can walk downtown and enjoy them,” Agran said. “I think they add a sense of dynamism and vitality, murals can go up in a weekend, or a week, and suddenly, a space can look totally different.”

Agran painted this mural to show aspects of Iowa City that many residents know well. The way each letter shows off iconic landmarks, and beloved businesses makes for an Iowa City cultural potluck of mural. This can be found in the alley between ICPL and Critical Hit Games.

This massive mural was designed to work around the electrical box and gas pipes sitting in the middle of the building wall. Meister dreamed up the idea of using the box as a film project that is showing out a colorful boat on the sea. This can be found right across from the Postcard mural, in the alley of ICPL and Critical Hit Games.

This hidden away machine can be seen in the further alley between Critical Hit Games and the Iowa City Public Library. The retro themed robot was created in 2018 by McGuire, with sponsorships coming from Iowa City Downtown District and University of Iowa Community Credit Union.

This mural can be found on the backside of the Ped Mall’s Filmscene. Its creator, Marina Ross, received a M.F.A. from the UI. The mural was given only one guideline when commissioned: “movement and film, not popcorn,” Agran said. This mural shows three models as they move and dance from film clip to film clip.

The image of two cowboys was commissioned by MidWestOne Bank. The mural was given the direction of “security and also not dusty,” said Agran. Because of this direction, he ended with the results of a mirrored image depicting two cowboys separated by a large safedoor. This image was designed around the restricted field of view of the wall, due to the narrow alley.  Because of this, Agran decided for a mirrored image, so both sides will see the same image. This mural is located on Clinton Street in the alley across from Buffalo Wild Wings.

“The Return” by Chris Vance

This explosion of color has become one of the most popular photo spots for social media in Iowa City, said Agran. “The Return” was painted by Vance and an assistant in 2018. The massive mural took a total of five days to complete, and can be found in the alley next The Sports Column.

This nearly fluorescent night scene can be found in front of Studio 13. Loewenstein was brought in to paint this massive image that features a racoon, cell phones, and many bioluminescent fireflies.

This massive mural can be seen from blocks away. The colorful birds, flora, and insects spark a sense of joy that jumps right off the brick wall. The mural was painted on laminated material and then transferred on to the large building. This mural also involved many young artists from the United Action for Youth. This mural can be seen from the corner of Linn Street and Washington Street.

Agran said he hoped this event would both give history to the public art, but also show attendees that these can happen all over Iowa City.

“I hope that there’s a demystifying quality here,” Agran said. “This is just an inexpensive way to have a real dynamic and powerful voice in the built environment of your community.”