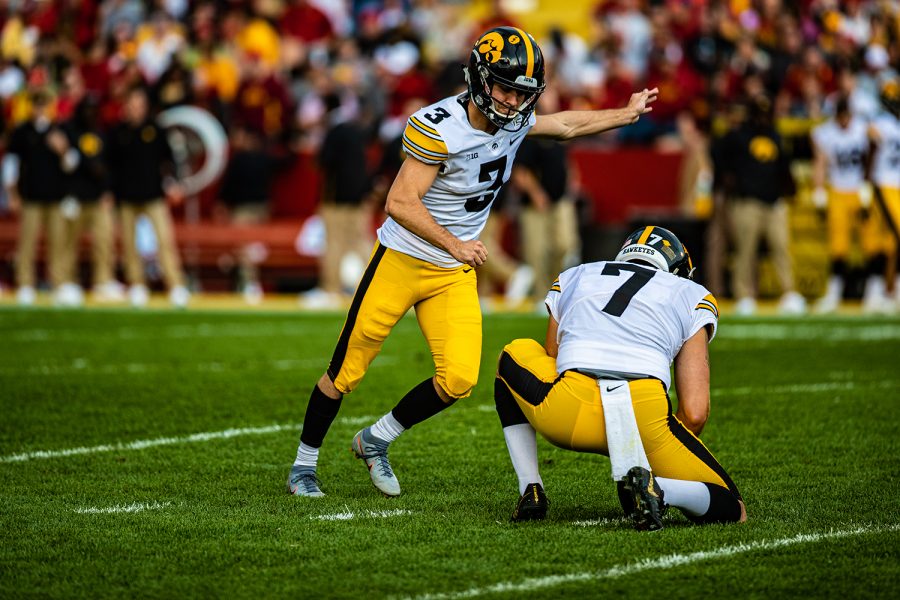 Iowa kicker Keith Duncan has been through a lot in his Hawkeye career, but all of the work he put in behind the scenes has paid off.

Keith Duncan stood in Kinnick Stadium under the lights, the illuminated green turf making a stark contrast against the dark Iowa City sky.

Facing a two-point deficit against then-No. 3 Michigan on Nov. 12, 2016, Duncan prepared for the biggest kick of his life from 33 yards out with two seconds left.

Duncan, a freshman at the time, set up in the middle of the field. A couple steps and a swing of the leg later, his life changed.

That’s when the legend of Keith Duncan started. One season later, however, he would be replaced by an older kicker for two years before making a comeback on the big stage in 2019, hitting 10 of his 11 field-goal attempts this season.

“After the Michigan game, I was going to class the next day, and I was on my moped, and there was a guy walking across the Old Capitol crosswalk,” Duncan said. “He kept looking at me. I’m like, ‘What is he looking at?’ And then all of a sudden, he said, ‘Hey, good game,’ and that was the first time I ever had anyone recognize me.”

Duncan’s career took a new path to the bench just a few games after his Michigan triumph. As soon as the true freshman hero made his impact felt in Kinnick, he was forced to watch from the sidelines.

Duncan endured the two seasons without attempting a single kick.

“It was very humbling,” Duncan said. “It was a great learning experience sitting on the bench for those two years. I got to learn different techniques, different mindsets, and also different routines… My job when I was on the bench was to basically be like, ‘OK if I was the starter, what would I do here? Where would my focus be? What’s my mindset?’”

The two helped each other even after Recinos took over. Recinos said they had two different kicking styles, so he couldn’t help as much from a technical perspective, but he still found ways to get through to Duncan.

With that, Recinos said, he helped Duncan learn how to talk to himself and how to approach certain situations that kickers face.

Duncan never wavered, even though he wasn’t receiving playing time on the field.

“There’s certain individuals where they just have this presence about them where, especially when you start going through hardships, you really get the measure of a man,” Recinos said. “[Duncan’s] always had this ability to focus on what he needs to do. Even when things are tough, even when he has every excuse to kind of give up or start to pack it in, he really rises to the occasion.”

Duncan was almost never in a position to be relegated to the bench at Iowa. Growing up in Weddington, North Carolina, he said his mother was all about the SEC and ACC.

But before he could put on the purple and white of the Paladins, he got some help from former Iowa and Carolina Panthers punter Jason Baker.

In high school, Duncan only played one game on a Saturday. It suited him well. He said he made 4 field goals against Charlotte Christian — NBA star Stephen Curry’s alma mater — in that game.

Charlotte Christian’s athletics director just so happened to be John Kasay, who played with Baker in Carolina. Kasay told Baker to check out the kicker they played, Duncan said, and Duncan talked on the phone with Iowa recruiting coordinator Seth Wallace shortly after. Done deal.

Baker’s impact didn’t stop there, though.

After sitting on the bench in 2017-18, Duncan continued working behind the scenes. After Recinos graduated, he found himself engaged in a position battle with Caleb Shudak.

The Hawkeye coaching staff didn’t even name a starter in this season’s first official depth chart, but Duncan was the kicker who trotted out onto the field when the field goal unit was called upon against Miami (Ohio).

Since taking the field again, Duncan is perfect from 40 yards or longer.

His performance against Iowa State on Sept. 14 proved to be his best outing of the season, hitting 4 field goals — one in each quarter — in dry and wet field conditions, with a light and dark sky, from both hashes, and the middle of the field. Duncan scored 12 of Iowa’s 18 points that game, helping the Hawkeyes capture their fifth-straight Cy-Hawk Trophy.

“My mindset’s changed,” Duncan said after the game. “I’m a very religious guy, and talking with Jason Baker about this, there’s a difference in kicking free. That’s how I feel now. Once you know God’s in control and He’s got it for you, then kick free, and there’s no stress.”

The feeling of kicking free has played a big role in Duncan’s resurgence. Through four games this season, Duncan has already made more field goals (10) than he did in his previous season as the starting kicker in 2016 (9).

“What you choose to believe is very relevant when it comes performance,” Baker said in an email to The Daily Iowan. “Not just in the spiritual sense, but in the psychological sense, as well. I’ve heard many coaches in my life talk about mental toughness but probably couldn’t actually tell you what that was.

“Most simply stated, mental toughness is you choosing what you are going to think about in a situation and not letting the situation choose what you will be thinking about. I know Keith understands that.”

That feeling of kicking free is something Duncan needed after being relegated to the bench.

“[Duncan’s] a guy that I would call very headstrong,” former Iowa and San Diego Chargers kicker Nate Kaeding said. “He is someone, from what I’ve observed, that really takes his routine and his process very seriously. I think he’s kind of mature beyond his years from that perspective, and it’s really paid off. I think he’s a great example of someone who does the mindset and mental side of the game really well.”

That’s something a kicker needs. There’s no other position in football where an entire game can be decided solely with one player’s performance. If one kick misses, it’s certainly not easy to bounce back and start a hot streak, especially with so much pressure riding on each attempt.

There’s no gray area when it comes to kicking. It’s either a make or a miss, and nothing can change that.

“The expectation is really to be perfect, is to execute every kick,” Kaeding said. “For a field goal kicker, you’re not asked to go out on the field really ever in a circumstance where they don’t think you can execute on the play.”

Despite those expectations, Duncan has found a way to persevere throughout his entire Hawkeye career.

“I hope Iowa fans really appreciate everything Keith has gone through to get to this point that he’s at, because it wasn’t easy,” Recinos said. “And I think that fans really do appreciate he stayed… Having been behind the scenes, Keith has really pushed himself very, very hard to get to where he’s at.

“He’s a guy where you see him on the outside, he’s playing rock, paper, scissors with Colten [Rastetter] and all that stuff, the little goofy stuff. But he’s extremely competitive. He’s extremely hard-working.”

That hard work has been key for Duncan’s re-emergence to the public.

Throughout 2019, Iowa head coach Kirk Ferentz and special teams coordinator LeVar Woods have raved about the work Duncan put in before and during the season.

It’s easy to see why when looking at Duncan’s outings each week. He’s been nearly automatic, helping his team stay undefeated.

With everything Duncan has been through — the early stardom, the benching in 2017-18, and the comeback this season — he’s learned a lot along the way.

“My mom’s going to hate this, [but] I’ve learned more in football than I have in school, basically,” Duncan said. “Just about life lessons. There’s not a price that you can put on what I’ve learned here on the football team — mental toughness, how to be a man, how to have a future, have a great family when you’re older.”