Iowa City and University Heights are starting to work on changing zoning lines for a University of Iowa project — a 120-unit apartment complex. 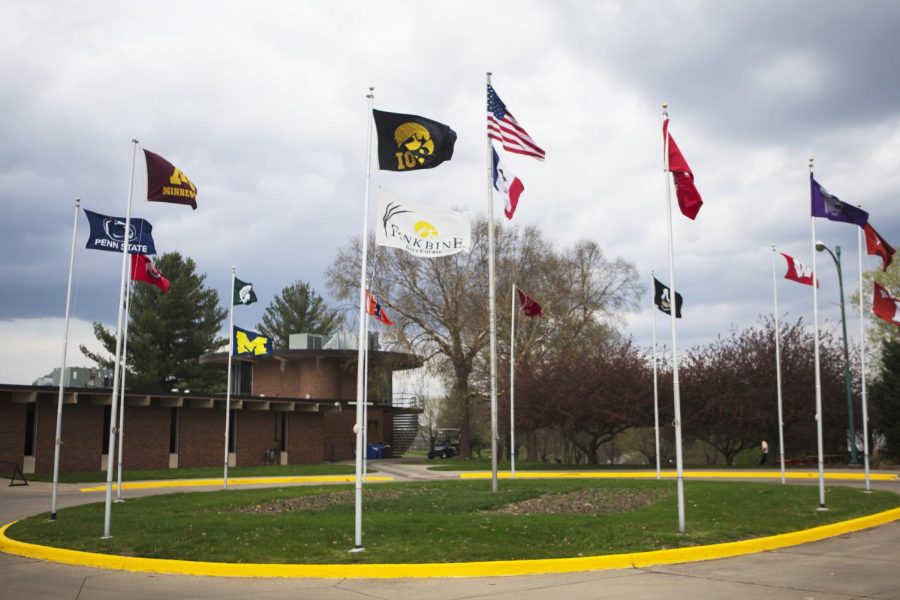 Flags wave during the Hawkeye Invitational at Finkbine Golf Course on April 15, 2017. University Heights and Iowa City are looking to rezone land around Finkbine to develop a university-owned apartment complex off of Melrose Avenue.

Two years into an ongoing project, University Heights and Iowa City seek to begin the process of changing zoning lines for a new university-owned apartment complex off of Melrose Avenue.

Owned by the University of Iowa since the 2008 flood, the Finkbine Athletic Club was razed in the spring to allot additional land for the university’s planned 120-unit apartment complex, UI Business Manager David Kieft said. The apartment complex is for active seniors ages 55 or older, he said, not students.

“This land was not identified in any master plans for an academic building, residence hall, or for recreational use,” Kieft said. “This project came about because the university has been looking for ways to take land like this to generate revenue due to state cuts in appropriations to keep tuition costs low.”

The apartment building is being developed in tandem with another project — the creation of a new golf clubhouse as a gateway to campus on the West Side. The state Board of Regents in August 2017 approved a $10 million proposal to replace the outdated Finkbine clubhouse with a newer facility.

UI Senior Associate Athletics Director Matt Henderson said that aspect of the project is almost complete, and the new facility is projected to open in April 2020.

“Both of these projects began in order to generate revenue and help the university as an institution in many ways,” Henderson said. “These buildings are also going to provide vibrant community engagement on the West Side of campus once they are completed.”

UI Assistant Vice President for External Relations Jeneane Beck said in an email to The Daily Iowan that plans for the apartments development are still in the preliminary stages, and there is no timeline for the project.

If a contract with a developer is eventually finalized, Beck said, it would require the regents’ review and approval.

Kieft said the jurisdictional lines as they are currently drawn allot for the planned building to start and end in Iowa City, but the middle third would sit in University Heights.

“It’s very quirky. Your living room could be in one town and your bedroom in another,” he said. “The person across the hall, as it is now, could live in another town than you. That doesn’t make any sense. Everyone agrees that the property lines need to be moved.”

The project can’t continue with the lines drawn as they are now, because it must go through the building permit and petition process in one jurisdiction, Kieft said. Zoning also affects which voting precinct the building is in.

“Now, when you get into actual development with developers, things like taxes and local ordinances matter,” he said. “Where we are right now is looking to move property lines according to the roads around the development to put the development only in University Heights.”

Anne Russett, a senior city planner for Iowa City, said Iowa City and University Heights are beginning the process to change the zoning lines now. The next step, she said, is to finalize the paperwork in changing the space from public land to a privately owned renting facility.

If the land remained public, it would have to be used for public benefit — such as for the building of classrooms instead of an apartment building for seniors, Russett said.

“We’re in the very early stages of discussion on this project. The cities have been working through jurisdictional boundaries, because the project crosses both,” she said. “We still need to know what that would look like and after that, the university would have to go through the rezoning process with Iowa City to use the land for private residences.”

The university’s goal is to break ground on the project in the spring of 2020, Kieft said.

“It doesn’t matter who takes the land when it comes to zoning,” he said. “The primary reason for this development is to generate additional revenue for campus in which athletics and campus will split. This will happen either way if the building is in University Heights or Iowa City. The revenue generated will go back to students.”