Opinion: Satellite Iowa caucuses are a step, not a solution

Several additional reforms should accompany and improve upon the Democrats’ new satellite primary voting in the Hawkeye State. 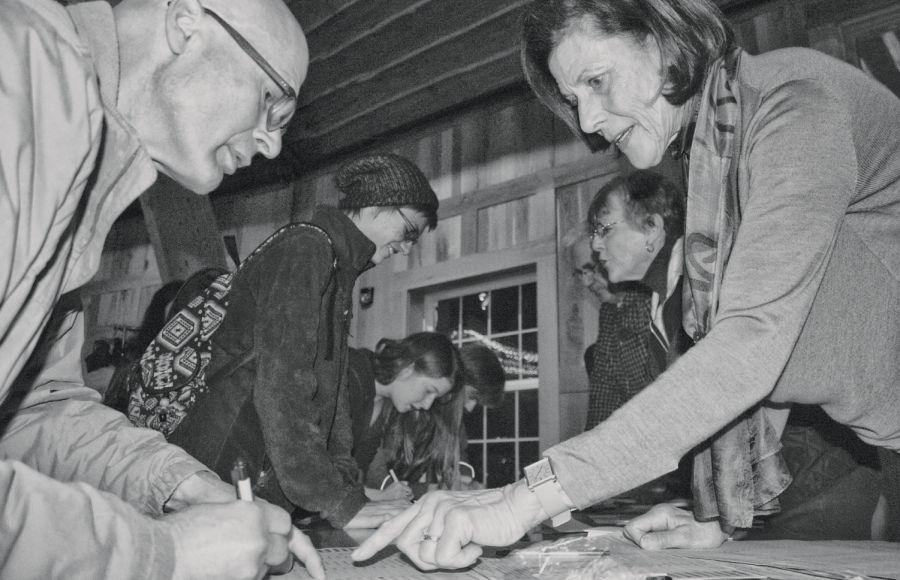 A caucus leader helps an Iowa resident check into the Democratic caucus at the Celebration Farm in Iowa City on Feb. 1, 2016.

A Democratic National Committee panel has approved a plan for Iowa to begin holding “satellite caucuses” in locations that demonstrate sufficient need for more accessible voting. The plan helps Iowa align with recent committee guidelines requiring that all states holding caucuses facilitate participation for those who face physical barriers to attending.

The resolution would make participation easier for certain demographics, such as residents of retirement homes and Iowans who are out of state on Feb. 3, whether they are deployed overseas or simply prefer the winter weather in Florida.

If Iowa truly wants to increase turnout in a meaningful way, the satellite caucuses are not enough.

There are a litany of options at our disposal. Allowing absentee voting is one such option, though that’s taken a bit of heat recently. A resolution to the DNC allowing caucus participation by phone was shot down in late August when it was declared too vulnerable to foreign interference. As a result, reform efforts shifted not toward less vulnerable absentee voting, but away from absentee ballots entirely — thus the conception of middle-ground satellite caucuses, which involve entire absentee districts rather than individual ballots.

Satellite caucuses are among a field of quick fixes for a system that is racked with problems, some of which stem from the fact that the caucus happens at 7 p.m. on a week night and refuses to accept absentee ballots.

Such arbitrary rules exclude a variety of people, from anyone working an evening shift to students with nighttime classes or extracurriculars and parents with young children. These groups compose huge swaths of the electorate, and without them the Democratic caucuses are simply not representative.

According to Iowa Secretary of State data, a little more than 100,000 Democrats participated in the 2008 and 2016 caucuses — roughly 16 percent of those eligible. The hour-long time commitment coupled with the unreasonably specific window of caucus timing means that less than one-fifth of voters have a chance to participate. Satellite caucuses, while well-intentioned, are a drop in the bucket to fix that.

One interesting proposal is to hold caucuses over the course of a week rather than just one night. The odds of people having a mid-shift hour to spare for deliberation and political discussion on say, the first Monday in February 2020, are inherently lower than their odds of having that time on any weekday from Feb. 3-7. This would be a huge step for part-time and night-shift workers. Giving them the choice on which day to caucus would help work around rigid schedules.

Another option that specifically targets student voters is Senate File 54, a bill in the Iowa Legislature that would prohibit public and private schools and universities from scheduling activities during the hour of the caucus. This would have two direct benefits — the first being freed up time for students with which they could attend caucus, and the other being a functionally mandated awareness of caucus time, as canceled classes would call attention to the date. Unfortunately, the bill was reassigned to another subcommittee in February and never advanced in the legislative process in the last session.

Any of these reforms could easily be paired with broader changes to Iowa’s election system. Recent calls to roll back the power of the Democratic Party’s superdelegates and curtail felon disenfranchisement in Iowa would empower voters and ensure that their opinions affect election results. Despite recent state-court rulings, Iowa still requires voter IDs, which opponents have criticized as contributing to decreased turnout among voters from underrepresented communities.

Satellite caucuses will increase voter turnout in Iowa’s primaries, but it’s nowhere near enough to reverse trends of voter disenfranchisement in the state. It is a good idea and a first step in the right direction, but by no means a final solution for Iowa’s out-of-date and exclusionary caucus process.