Gibson finds a balance excelling in athletics and academics

Freshman field hockey player Esme Gibson came all the way from England for play for Iowa. Not only is she finding success on the field, she is also succeeding in the classroom. 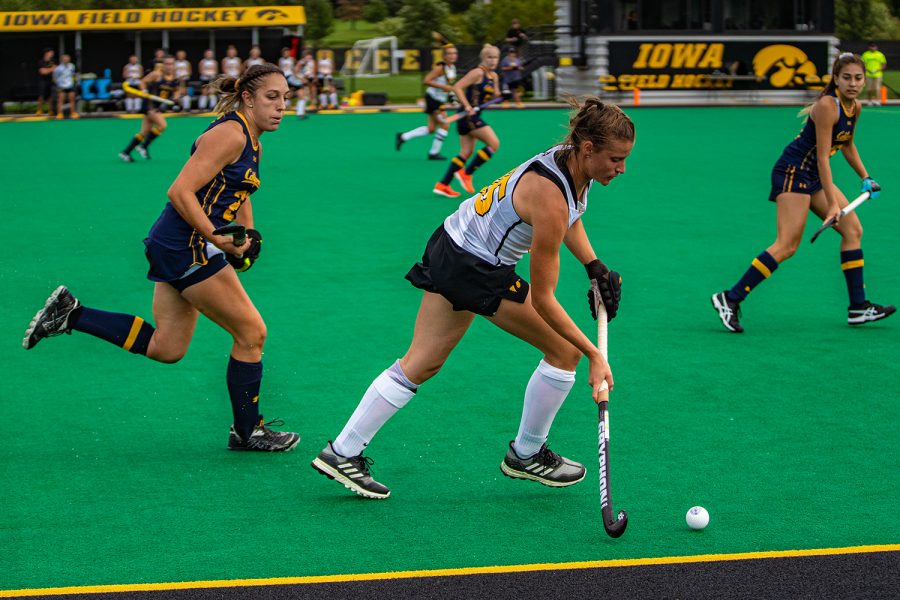 Before Esme Gibson ever stepped foot on U.S. soil to play field hockey for Iowa, she could be found in Worcestershire, England, dominating both on the field and in the classroom.

The freshman made first team honouree at Repton School in Derbyshire and was voted Player of the Season in 2017-18 for Cannock Hockey Club within the national league.

“I started playing when I was about five,” Gibson said. “So, I’ve been playing for 13 years now. I actually used to hate it, and then one day I just really fell in love with it, and I’ve been playing ever since.”

Off the field, Gibson earned first-team sports scholar at Repton and was an academic scholar from 2017-19. She competed for the United Kingdom in both the UK Math Challenge and the UK Biology Olympiad, earning bronze and silver medals, respectively.

“My dad is a teacher and both of my parents went to Oxford,” Gibson said. “So there’s been some pressure on me since I was young, but it’s important to me to get a good academic qualification.”

When she was younger, Gibson attended a boarding school. That experience being far from home has made her transition to Iowa easier.

There are times Gibson still misses being home, however.

“The transition has been really good,” Gibson said. “I’m used to being away from home and away from family, but I still miss everyone.”

Before she committed to Iowa, Gibson also had two other offers to play at different schools, but she chose to become a Hawkeye because of the quality of the program and the people in it.

So far this season, Gibson has played a season high of 485 minutes for the nationally ranked Hawkeyes, including a season-high 71 minutes against Duke. She has taken 4 shots on the season and tallied the first point of her career on an assist to Katie Birch.

“The coaches are amazing, the facilities are incredible, and the academics are also really great as well,” Gibson said. “Iowa City is also a really nice place to be, and the team is great, we get along really well.”

Gibson admitted that while everyone on the team is different in their own way, when they need to come together as a team, they are one unified group.

“We’re a bit crazy,” she joked. “We come together as a unit and it all seems to work. Everyone is included and we have a lot of fun.”

When Iowa was recruiting Gibson, they instantly noticed her defensive skills and her understanding of every aspect of the game.

“She is speedy and confident,”  Iowa head coach Lisa Cellucci said. “But her ability to intercept and her great defensive footwork [are also impressive].”

Iowa also noticed how Gibson’s personality off the field translates into how she plays when she’s in a game.

“She’s very humble but also very funny and sarcastic,” Cellucci said. “She catches people off guard sometimes, and that’s exactly how she plays on the field. She comes up with huge interceptions and really timely tackles, so it really fits.”