State water quality remains poor, according to sustainability experts, as chemical fertilizers from farms find their way into Iowa’s rivers and lakes to create a hazardous environment. 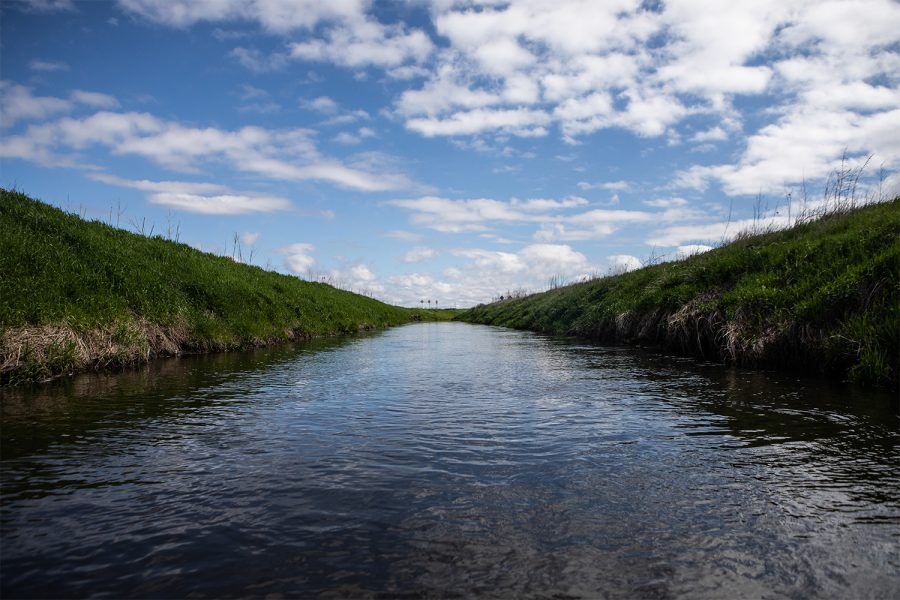 A narrow section of the Iowa River's west branch is seen on May 20, 2019. The expedition, which spanned 27 days covered the entire length of the 329 mile river, sought to provide insight into issues of water quality within the state. Along the way, Daily Iowan Photojournalist Ryan Adams conducted nitrate tests of the water, talked with Iowa citizens from a diverse set of backgrounds to understand how Iowans view the issue.

The recent completion of the multiyear Kent Park Lake Restoration project brought forth the larger issue of water quality in Iowa as lawmakers and environmental advocates attempt to combat pollution of the state’s waterways.

While the project led to a reopened Kent Park Lake in Oxford, Iowa, to the public, some community members believe it is indicative of a much larger issue: the health and wellness of the lakes and rivers around Iowa. The project succeeded in the removal of water chemicals, the restoration of hundreds of acres of prairie, dredging of the lake, and the removal of excess sediment, said Kristen Morrow, a Johnson County Conservation naturalist.

Various bodies of water are losing oxygen statewide due to an excessive amount of nutrients, Morrow said. Results include unsafe water conditions, contaminated drinking water, and hefty restoration projects such as that of Kent Park Lake, she added.

As farms overuse chemicals found in fertilizers such as nitrates and phosphates, those materials are trickling down into the state’s water supply and creating a widespread impact on Iowa’s water quality, Morrow said.

Kristen Morrow, a Johnson County Conservation naturalist, said excessive nutrients in the water are a common problem in Iowa due to runoff from fertilizers — the majority of which stem from the agricultural community.

“Overall, nutrients aren’t necessarily a bad thing,” Morrow said. “They are the fuel that all sorts of life need, but having too many nutrients results in overly fertilized waters that can support excessive growth of things like algae.”

Nitrates and phosphates that come from fertilizers pollute the water and create a rise in the algae population. The algae buildup begins to starve the water of its oxygen and can be hazardous, said Blake Rupe, the sustainability program manager for the University of Iowa Office of Sustainability and the Environment.

“What we see more of are instances of cancer for sure, especially in those who are really young and really old,” Rupe said.

In addition, the low water quality can cause “blue-baby syndrome” in infants, Rupe said, a condition in which babies die due to a lack of oxygen that usually happens when people use tap water in their baby formula.

Rupe added that the acceptable amount of chemicals in water, currently 10 parts per million of nitrogen, are still much too high to be considered safe — and the responsibility to purify the water rests on the people.

Despite the hazards, serious change seems unlikely to happen soon, said Iowa Sen. Joe Bolkcom, the outreach and community education director for the Center for Global and Regional Environmental Research.

While there are currently ideas for improvement, such as adopting nutrient standards for lakes and protecting the bodies of water after restoration projects, most programs aimed at combating excessive nutrients are voluntary, Bolkcom said.

Statewide efforts to increase the quality of water include improvement plans from the Iowa Department of Natural Resources to investigate impaired streams and a bill signed by Gov. Kim Reynolds in January 2018 that allocated $282 million to water-quality initiatives for the next dozen years.

“People in the agricultural community don’t like to be told what to do,” Bolkcom said. “They are very independent. They want to do what they want to do and any regulation. They are pretty much opposed to it. The problem with that scenario is that water in the river belongs to everybody.”