On Tuesday night, UISG and GPSG unanimously passed a resolution on a climate change call to action during their joint session. Many senators mentioned why it was an important conversation and action to take on campus. 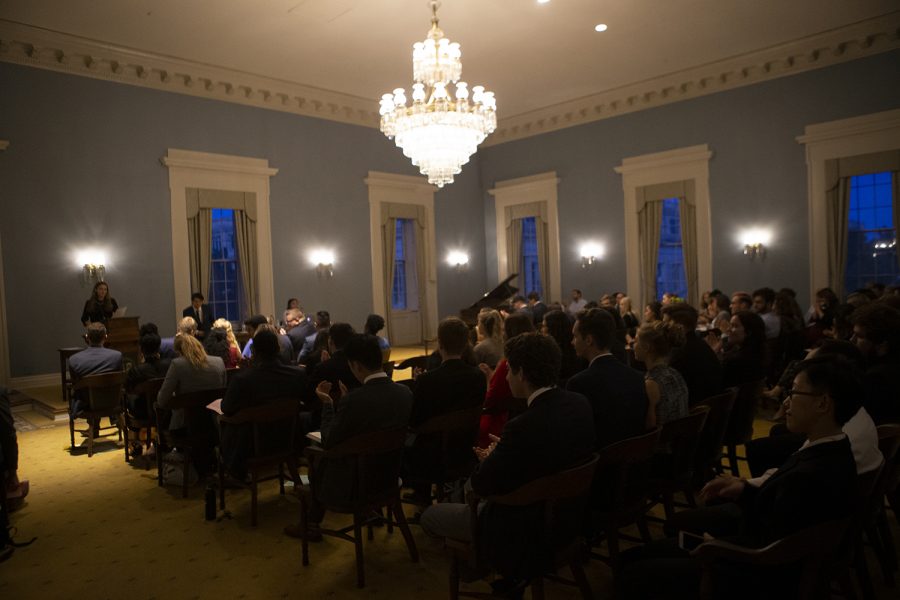 Senators vote on a joint resolution during a joint session of UISG and GPSG on Tuesday, Sept. 24, 2019. The two student governance bodies met to vote on three joint resolutions, which passed unanimously. (Emily Wangen/The Daily Iowan)

After seeing the adverse effects of climate issues on many Iowa students, UISG submitted a resolution to declare a climate change call to action and discussed it at their Sept. 24 meeting.

Joseph Haggerty, a coauthor of the resolution, was adamant about the effects seen from climate change and how the university can have an impact.

“The climate crisis is one of the most important issues facing the world,” Haggerty said. “We are seeing impacts within Iowa in flooding and decreased agricultural yields leading to the Iowa way of life being lost. We can change that. As an institution, we can make powerful changes.”

Haggerty said the resolution was also a reaction to this summer’s passing of a resolution that called a climate emergency declaration through the Association of Big Ten Students. He mentioned Iowa City City Council additionally made a call to action and advocated for nonrenewable fossil fuels to no longer power the city.

The resolution specifically addressed combating climate change issues alongside other student organizations, the UI Office of Sustainability a and some other local partners.

The university is also currently exploring a public/private partnership involving its utility system for the next 50 years. This is a solution to the vast gaps in the execution and support of UI’s Strategic Plan 2016-2021.

As this process continues, community members and students have begun raising questions as to how a company would be held accountable based on the university’s long-term sustainability concerns over such a long period of time, as Parliamentarian Jacob Heid mentioned.

“The public/private partnership that we have the possibility of entering is a 50-year contract. 2070 might seem far away, but I think that as we are seeing climate scenarios grow worse, and it is not too hard to imagine a scenario in which the University of Iowa could degrade with really extreme climate change,” Heid said.

However, co-author of the legislation and GPSG member Christian Bako identified the public-private-partnership as an opportunity to strengthen academic collaborations.

“We can use the P3 [agreement] as a vehicle to make progress on the university’s commitment to mitigating climate change,” Bako said.

The resolution senators debated encouraged current UI administration members and departments to understand the ways the university and students impact our global environment. It also affirmed UISG and GPSG’s support of the College of Liberal Arts and Sciences adding sustainability to its core values.