The University of Iowa is nearing the end of a long process to finding a private company to partner with in the operation of its utilities. 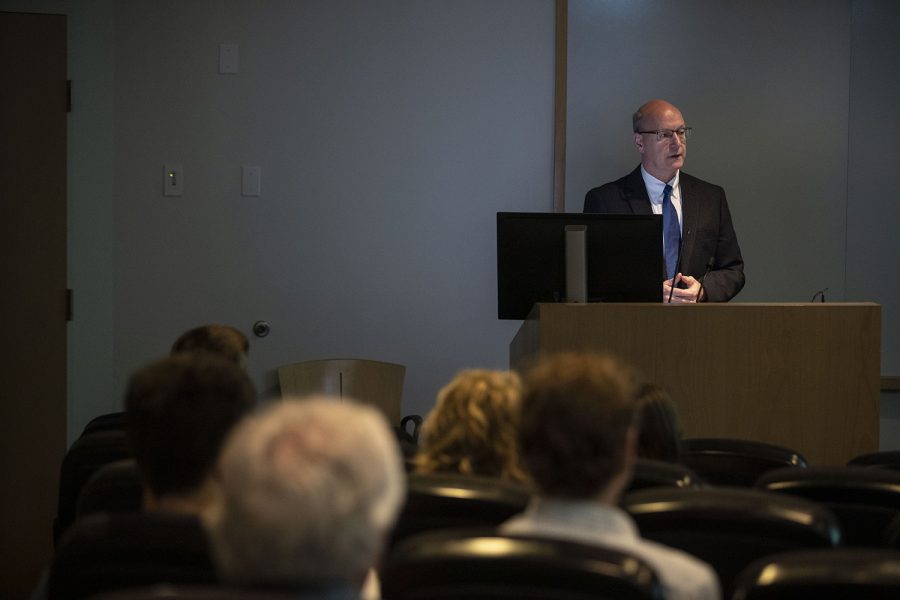 Chief Finanical officer for the office of Finance and Operations Terry Johnson addresses the audience during a P3 informational meeting in the Medical Education Research Facility on Tuesday Sept. 24, 2019.

Following months of conversation around an attempt to serve students better and execute its strategic plan, the University of Iowa is exploring its options for a public/private partnership to operate campus utilities.

“We expect to grow the university, to increase its ranking, to make it a destination university, and to make it a place where students come to learn,” said Terry Johnson, UI Chief Financial Officer and Treasurer at one of the campus-sponsored public/private partnership informational sessions that took place Monday and Tuesday.

The idea of a potential public/private partnership was initially introduced in February, when UI President Bruce Harreld announced that the UI would embark on a nine to 10-month journey of exploration into the opportunity, which would allow the university to profit from its own utility system.

“The UI is committed to delivering on our mission of education and research excellence,” Harreld said in a news release that month.

As previously reported by The Daily Iowan, state Board of Regents president Michael Richards said at a meeting in Council Bluffs on Sept. 19 that each regent university is actively looking for additional sources of revenue to complement tuition, state appropriations, and reallocation specifically.

He commended the UI for its impending agreement with an outside corporation to benefit financially from its utility system.

“If [the public/private partnership] initial effort is successful, this could provide a blueprint for future opportunities for other institutions and even possibly other branches of state government,” Richards said.

Now approximately seven months into its exploration, the university is past the point of evaluating how the public/private partnership would bring in additional revenue to campus and what kind of impact it would have on jobs among UI utility workers. The next step is to choose a private company to partner with.

The UI is still exploring the possible agreement and has not finalized a deal at this time.

The proposed partnership is currently approaching the third stage of the four-stage process in choosing a commercial partner, he said. The third draft of the proposal will be released to potential concessionaires within the next week and will likely be almost identical to the final draft, Johnson said.

Johnson stated that the UI will choose the concessionaire that offers “the best bid, not necessarily the bid with the highest dollar value.”

He explained the UI will assess not only how much money a concessionaire offers but which concessionaire will most effectively aid in executing the UI’s goals, including ecological sustainability.

Once bidders respond to the proposal’s latest draft, the third stage of the UI’s public/private partnership process will be set in motion.

“The UI will receive a significant upfront payment,” Harreld said of the partnership at the state Board of Regents meeting in Council Bluffs on Sept. 19.

UI utilities staff will receive job offers of equal or greater pay with the concessionaire if they so choose, Johnson said, though the benefits may not measure up to benefits the employees receive through the university. This transition will affect roughly 120 employees, he added, and he estimated the UI plans to retain about 10 campus utilities positions.

“These are world-class operations, and we have world-class staff,” Johnson said. “We tell the bidders that they need to provide for the employees and treat them the way that [the university] has treated them. You can’t shirk that responsibility.”