Urban Bush Women catalysed, visualized, and mesmerized with their show “Hair, and Other Stories” at Hancher.

Hitting Hancher’s stage once again, Urban Bush Women intertwine their stories about claiming individuality with the residents of Iowa City. 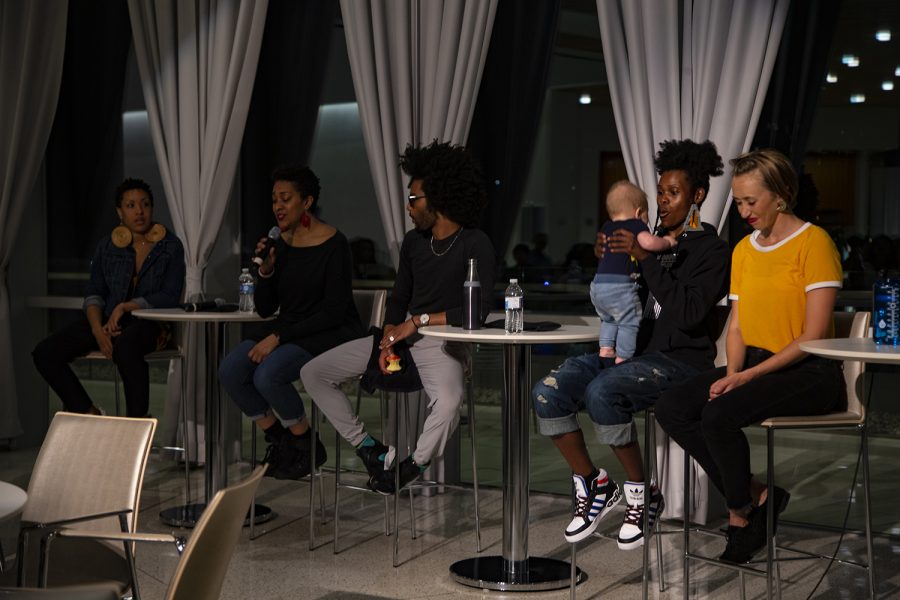 With their performance entitled Hair, and Other Stories, on Sept. 21 at Hancher Auditorium, Urban Bush Women brought challenges to the forefront of the stage, leaving an experience that can only be summarized by an expression: to each their own.

“Something that I really love about Urban Bush Women and find to be unique and special about the work we do is that there is always a push into something more than what we’ve been doing,” said Samantha Speis, one of the co-artistic directors.

Chanon Judson, her fellow co-artistic director, emphasized that this story is one for the community, bringing conversations to those who can relate and those who perhaps have no experience with the material.

“We are looking forward to being what the company terms a catalytic outsider,” Judson said. “As an outsider we can say: hey, here’s this perspective. Have you ever thought of it that way?”

The performers catalyzed, posing shallow and deep questions alike to get anyone with open ears in Iowa City thinking, moving, and feeling.

“Don’t you get too comfortable because we are going on a journey,” said Tendayi Kuumba, one of the company members in an interview before the performance.

Being asked to wave arms, wriggle their rooted bodies, and introduce themselves to those sitting next to them, the audience’s energy slowly seeped out to collaborate with the space. I called out to my seat neighbor across the aisle and she called out back that we did not have to leave the space as the people we were before.

The night proceeded to take me on a journey of color: racial divides, colorism, vibrant outfits, and shifting lights. The performance was in constant flux visually, verbally, and kinesthetically that engaged me so heavily as an audience member. Being asked to face uncomfortable truths, I found myself stewing in some of my deepest ingrained values given to me by society in moments of silence.

Left in some moments of silence, I felt an encroaching discomfort as my brain had an instinctual draw to one word in particular. I felt like a fish with a hook in my mouth, drawn in by the reeling suspension of Speis’ elongated pronunciation.

Related: ‘Hand to God’ stands apart from other shows in all of its unique, demonic puppetry goodness

Each of the artists vocalized their own personal presence and experience with the show, in a discussion group following the performance, allowing audience members to see the individual threads that weave this group and performance so intricately together.

“It started with multiplicity and curation, and now I’m really in the space of my divine masculinity,” said Du’bois A’keen, one of the company members.

“White people are raised as this ideal,” said Stephanie Mas, the only white member of the group. “My mother used to tell me, ‘Everyone wants your hair.’ If I’m not bringing my own work as a white person to the table, what’s the point?”

“An act of healing this show has brought is reclaiming who I am, owning who I am, where I come from,” said Courtney Cook, another company member.

The telling of such stories and ideas both on and off the stage resonates, hitting a deeper chord of empowering peoples’ narratives, pushing that vulnerability and truth within the individual is innately special and powerful. It’s this that signifies Urban Bush Women as such standout performers, flexible to any environment willing to be uncomfortable.

“We’re literally trying to change the world; we’re real about that,” Judson said.