The announcement comes after allegations of beer cans being thrown and of a student being treated for broken ribs after the Sept. 14 rivalry-series game. 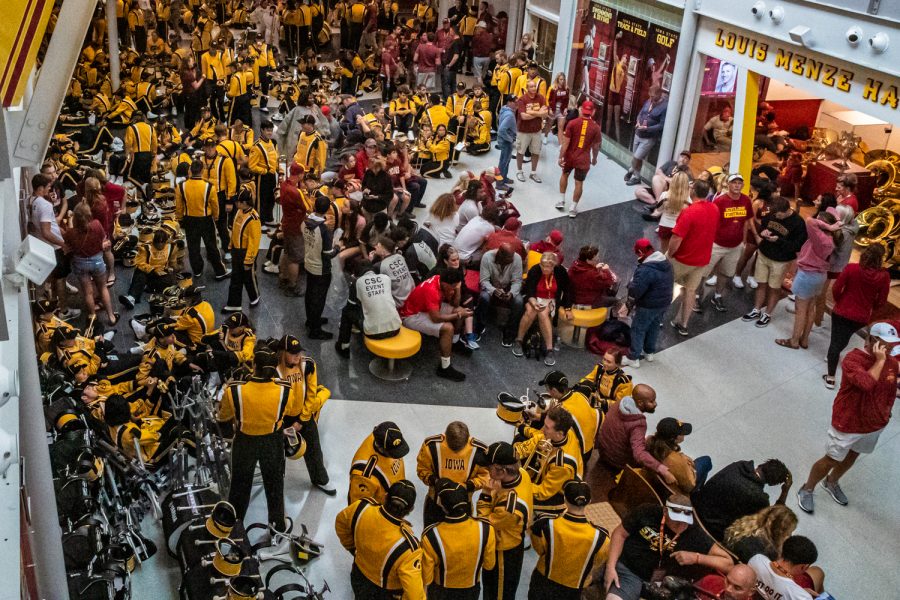 Marching band members escape the rain during a football game between Iowa and Iowa State at Jack Trice Stadium in Ames on Sept. 14, 2019.

The University of Iowa on Sept. 20 announced it will continue its investigation into Hawkeye Marching Band members’ allegations of mistreatment that students say they suffered during the Sept. 14 Cy-Hawk football game in Ames.

Band members took to social media to allege that Iowa State University students physically harassed them during the game at Jack Trice Stadium and to detail the seriousness of the injuries reportedly suffered, as first reported by The Daily Iowan.

On Sept. 19, Barta announced the UI had shut down the investigation, which prompted several Hawkeye Marching Band members to go public with the allegations. The UI on Sept.20 reversed its course.

“The communication on social media made it clear we had not shared enough information with our students about the steps the university has taken to address the concerns raised by members of our marching band,” UI Assistant Vice President for External Relations Jeneane Beck said in an email. “Student safety is our No. 1 priority, and we are committed to ensuring a safe experience on game day for our students. Additionally, we are continuing our investigation to ensure all of our students have the ability to share their experiences with the appropriate authorities.”

“Your safety is of paramount concern to each of us at the university, and while we cannot change what occurred last Saturday, we can work to prevent it from occurring again — and that is what we are committed to doing,” the message read.

In the last week, the message said Barta reached out to ISU Athletics Director Jamie Pollard after receiving information about the incidents. Further, the UI said, Burke reached out to students identified as being affected at the Sept. 14 game and the UI said the Division of Student Life, Human Resources, Athletics Department, and School of Music met with the entire band.

“[UI] President [Bruce] Harreld and Director Barta have been actively engaged in the process and have publicly pledged to ensure better protections for students moving forward,” the message read. “President Harreld visited with ISU President Wintersteen and UNI President Nook, and each committed to discussing and adopting a uniform safety protocol prior to next season.”

The message provided affected students with university resources to turn to for support.

“We understand the last week has been difficult for each of you, and we would like to take a moment to offer our unconditional support, while ensuring you have access to the list of resources which was shared on Tuesday,” the message read. (Asterisks indicate confidential offices.)

The message also stated that law-enforcement officials are limited in their ability to respond to allegations shared with the media or online. Alleged assault victims were encouraged to file a report with the appropriate law-enforcement agency by contacting the UI police.