FilmScene Chauncey raises the curtain: a look into the new building

After almost three years of construction, FilmScene’s new location in the Chauncey Building is celebrating its opening today with programming for every type of movie lover. 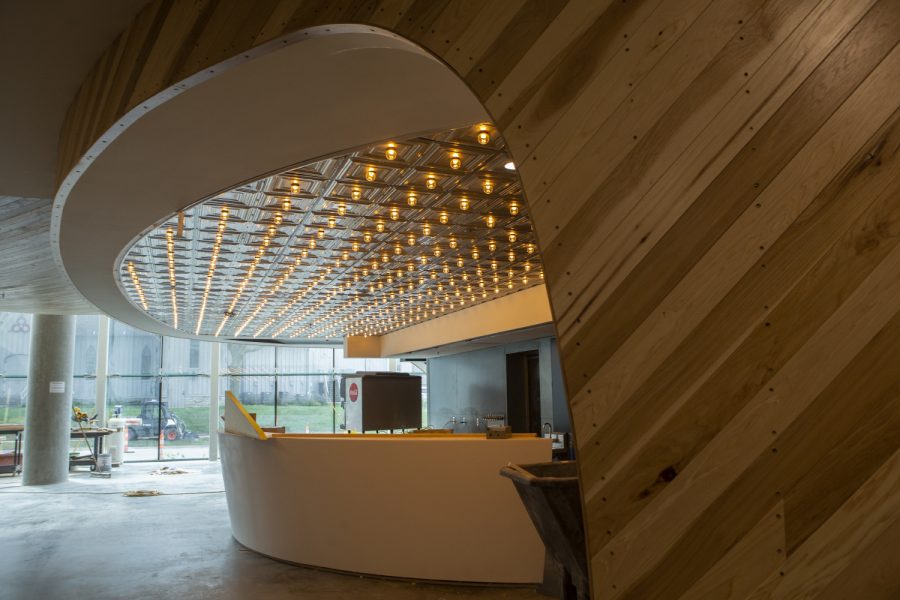 The concession stand is seen during a tour of the new Filmscene in the Chauncey Building on Monday, Sept. 16, 2019.

If one were to peer through the glass of the Chauncey Building, it would be hard to guess what resides inside at first. Lightly colored wood curves around the outside of bulbous rooms, each board laid by hand. Hundreds of small, bare bulbs glow above sharp-angled counters, giving the modern space a soft, vintage feel.

Two glaring clues about what is housed in the space include the giant FilmScene sign hanging on the side of the building and the screens displaying showtimes bright enough for people across the street to read.

FilmScene’s second location opens today before celebrating all weekend with programming meant to honor film in its different forms.

The theater will play three cinema classics from the past — Field of Dreams, Cinema Paradiso, and The Blob — along with a Downton Abbey showing and party at which guests are encouraged to dress up.

The theater will also screen Haunt from the University of Iowa alums behind A Quiet Place, Scott Beck and Bryan Woods. The two screenwriters are visiting Iowa City for the première on Sept. 21.

UI student organization Bijou Film Board, a FilmScene partner, will have its own showing on Sept. 21 of Wayward Cloud, a Taiwanese adult film.

“Often, people will reach out to us with a really great idea or film that they want to see on screen, and based on limited screens, we aren’t able to present that,” Fons said. “So with more space and more screens, we’re able to do more programming and then also still fulfill the requirements set upon us by film distributors.”

The city-owned lot at the intersection of Gilbert and College Streets housing the $57-million Chauncey Building once held a Greyhound station, then sat empty for more than a decade, FilmScene Executive Director Joe Tiefenthaler said.

Moen Group, in collaboration with FilmScene, won the city’s bid in 2013 to build on the lot. Construction crews broke ground on Chauncey in December 2016, FilmScene co-founder Andrew Sherburne said.

“We’ve been able to grow kind of organically there on the [Pedestrian] Mall, which has actually been a very good thing so that when we come into this space, we know what we’re doing,” Sherburne said. “We know how to run a movie theater. We have a community that already supports us.”

“We couldn’t be more happy for the FilmScene and Chauncey team and for everything that they’re doing on behalf of downtown, the entire community, and the region at large,” she said.

Each of the three theaters holds true to the original FilmScene design of abstract, angular shapes in a blue, black, and white color scheme. Instead of curtains and sconces, some of the shapes are covered in fabric and lined with LED lights, either inlayed into the wall or popping out, giving the space a 3D feel.

In the building’s largest theater, which holds 117 seats, four squares have been cut into the back wall. These are for the variety of projectors FilmScene owns, giving the theater better digital viewing and the ability to show 16- and 35-millimeter film. One screen is a traditional silver screen, and the other is gray, which creates a better picture for digital projectors.

Tiefenthaler said the panels can come down to change the shape of the screens to eliminate negative space when showing different types of film, and the sound system is also state-of-the-art.

“This is going to be … potentially just one of the great cinemas of the entire region,” Tiefenthaler said.

Bijou Executive Director Molly Bagnall said the new projectors, as well as the greater number of screens, will allow the organizations to branch out in the types of movies shown. She said she’s most excited to show technicolor films on 35-millimeter film.

“You haven’t seen something like Singing in the Rain until you’ve seen it on 35 millimeter,” she said.

“There’s been a clamoring for additional theater space,” she said. “The new FilmScene is going to be an added pearl to the cultural assets that we have downtown.”

Both Tiefenthaler and Bagnall agreed that one of the best things about the new location is the increased visibility, which will hopefully draw in more students. Bagnall said she hopes FilmScene can become a safe haven for students looking for something to do other than party on a weekend.

“We hope that with the visibility and actual programming that we’re able to have students enjoy our spaces and come in and see the movies,” Tiefenthaler said.