Massachusetts Senator Elizabeth Warren talked corruption, wealth tax, and voting rights to a crowd of over a thousand at the Iowa Memorial Union. 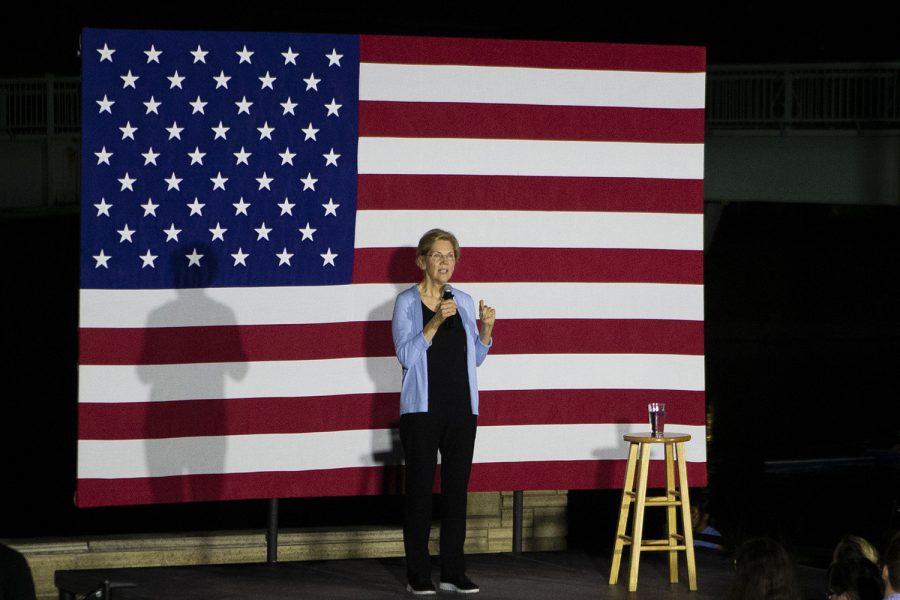 Sen. Elizabeth Warren, D-Mass. gave her pitch for the presidential nomination at a rally in the IMU, delivering a familiar message on economic change to a crowd of more than 1,000 people.

Warren touted her plan to address corruption in government, which draws on her anti-corruption legislation proposed in 2018.

“We need to tackle corruption head-on,” Warren said on Sept. 18. “We need to run right down the middle of it.”

The plan features several changes to the lobbying system, including barring most elected federal officials from becoming lobbyists after leaving office. It would also require candidates for any federal office to make their tax returns public.

Warren addressed changes that she would make to the economy, which include a wealth tax on individuals who make more than $50 million a year. The plan would put a 2 percent tax on Americans with a net worth above $50 million.

“All we’re saying is if you make it big … I mean one-tenth of 1 percent big, pitch in 2 cents so everybody else gets a chance to make it in this country,” Warren said.

Finally, Warren said she would pass a constitutional amendment to protect voting rights, outlaw political gerrymandering, and address voter suppression. She has previously called for abolishing the Electoral College and electing the president by popular vote.

“I just want three things,” Warren said. “Attack the corruption head-on, make a couple of structural changes in our economy, and protect our democracy, so that our government truly reflects the will of the people.”

Warren was welcomed to the stage by Sen. Zach Wahls, D-Coralville, who expressed his admiration for Warren but stopped short of endorsing her.

“Like some of you here, I’m still working on my final decision of who I’m going to caucus for in February, but I want to tell you why Sen. Warren is one of my favorites in the race,” Wahls said. “She’s got a plan for that.”

UI sophomore Kate Roleck said she had want to see Warren speak for a long time, and was excited to attend the event.

“I think she’s incredibly intelligent, and I really think her policies could change the direction of American politics for the better,” Roleck said.

With Warren and Sen Bernie Sanders, I-Vt., agreeing on further left policies in the Democratic field, Roleck said, she agrees with both of them but is more convinced by Warren.

“The way that she presents [her ideas] and the way that she thoroughly explains everything and makes it so easy to read, you know exactly what’s going to happen, and she can make it happen,” Roleck said.

Warren has seen steady increases in polling for the past several months, and a recent poll in Iowa has her 2 percentage points behind former Vice President Joe Biden at 23 percent.

Speaking with reporters, Warren said she isn’t looking to just separate herself from Sanders for the party’s left wing but to appeal to the broader Democratic Party with a unifying message.

“When I talk about corruption, it’s not just progressives who nod their head yes,” she said. “It’s folks who have felt it, who have seen it.”