The Hawkeye football coordinators spoke on how to improve their respective specialty areas on Wednesday. 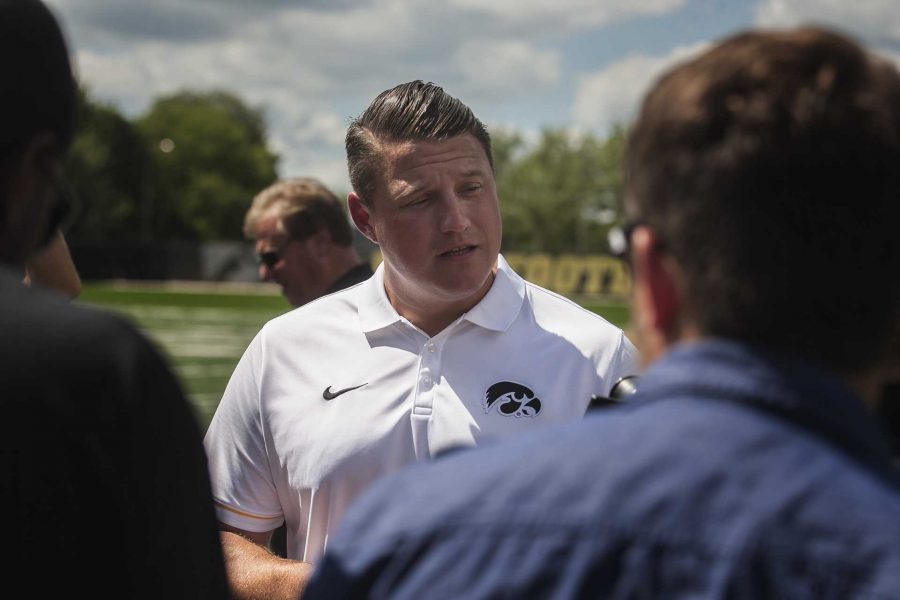 Iowa football coordinators — Brian Ferentz on offense, LeVar Woods on special teams, and Phil Parker on defense — addressed the media on Sept. 18 in a bye-week tradition that comes a little earlier than in years past.

With a 3-0 record following wins against Miami (Ohio), Rutgers, and Iowa State in a very unusual game in Ames, each section of Iowa’s team has things it has excelled at and things it can do better come Week 5.

One of the biggest questions looking from the outside at Iowa football’s offense is Oliver Martin and his playing time after he saw only two snaps against Iowa State.

Martin, a transfer from Michigan whose waiver was approved to play just days before the Miami (Ohio) game, has only 4 receptions for 24 yards through three games. However, his playing time isn’t something that Ferentz wants to address.

“I will tell you right now, I’m not going through that this year,” Ferentz said. “This guy plays, that guy doesn’t play — if guys are out there producing, that’s the way it is.”

And Iowa’s core receiving group that gets the majority of snaps is producing, thanks to the way Nate Stanley has thrown the ball through the first three weeks.

Despite some missed tosses against Iowa State, he showed his ability to make something out of nothing.

“Nate is able to get us in and out of plays and deal with some looks that were a little bit different, handle some pressure looks, make some adjustments,” Ferentz said. “The last pass to [wide receiver Nico] Ragaini, we missed the throw, but actually, that was not the called play. You can see in the very last seconds, Stanley gives him an adjustment on the route. Saw something in the coverage, and it was there. We just didn’t make the play.”

Injuries have been the name of the game for Iowa’s defense in the first three weeks, and the bye week comes at the perfect time to get some of those big players back before Big Ten season gets into full swing.

Defensive backs Kaevon Merriweather and Julius Brents are both working toward coming back to bring more depth to that position.

“I know this week right here is a good week even to rest our starters and get some other looks at some other guys and bring them along,” Parker said.

The injuries cause a lack of depth, but as a collective group, the defense has things pointed out that it can work on this week and then in specific preparation for Middle Tennessee State come Friday.

“Obviously, the tackling I think should be better,” Parker said. “The communication that we’ve got to have. There’s a couple plays out there that we left out there that if we would have made the right call, something could have been different.

“In an atmosphere like that, you miss some things, but we have to be better communicators. That’s everybody, including myself.”

Kicker Keith Duncan and punter Michael Sleep-Dalton have been two of Iowa’s standout stars on any side of the ball.

Duncan is 8-for-8 this season after making all four of his attempts — one in each quarter — against Iowa State. He is seeing consistent playing time for the first time in his career since 2016.

“I think Keith has done a good job,” Woods said. “I wouldn’t necessarily call it a re-emergence. Maybe re-emergence to the public, but I think he’s been working really hard behind the scenes.”

Sleep-Dalton has been key in setting up field position for the Hawkeye defense after transferring in from Arizona State. Punting in the Midwest is certainly different, but a new environment to work on his skills is part of the reason he chose Iowa, and it’s paying off.

“I think the Rutgers game is the one where we started off backed up, his first real punt, he hit the ball across the 50-yard line, and we go down and cover for no return, I think it’s minus-two return,” Woods said. “It’s a huge play for a team like us that prides itself on winning field position.”

Woods wants his group to focus on punt and kick returns as well as cutting down on its penalties.