The UI received a $7 million grant from the U.S. Department of Transportation for their National Automated Driving System, which will help bring safe, driverless transportation to rural areas with support from Sen. Dave Loebsack. 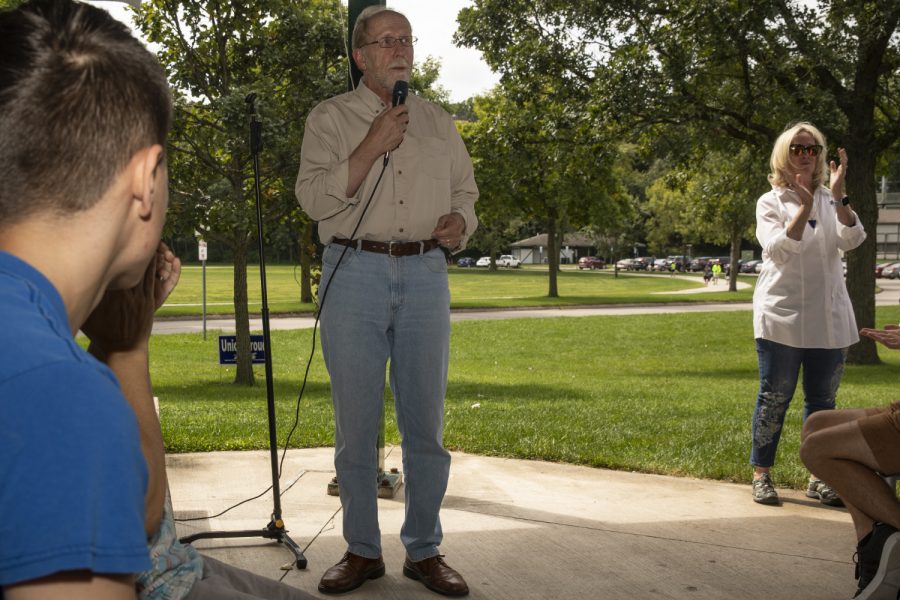 Rep. Dave Loebsack speaks during the Iowa City Federation of Labor Labor Day Picnic in City Park on September 2, 2019. Among the candidates to attend the event were Sen. Michael Bennet and Former Vice President Joe Biden.

Through the US Department of Transportation, the University of Iowa received a $7 million grant for their National Automated Driving System program to promote driverless vehicles in rural areas.

Iowa Democratic Rep. Dave Loebsack said he has remained supportive of the system from the beginning. Back in June 2018, Loebsack introduced legislation for development of higher quality road mapping to create a safe environment for these automatic vehicles.

“U of I applied for the grant and won,” Loebsack said. “I think it says a lot about the program itself and how successful it has been.”

While only about 19 percent of Americans live in rural areas, almost 50 percent of traffic fatalities occur on rural roads, according to the U.S. Department of Transportation. The grant will connect rural areas so that they can have access to safe driverless cars which will come with the future of transportation.

“It’s a great program for driverless vehicles,” he said. “I actually visited the lab on campus and rode in a driverless vehicle to the engineering building. We had someone behind the wheel, but he never once had to assist the vehicle.”

Loebsack admitted that driverless vehicles are going to come with the future and will improve rural transportation, but he wants to ensure a safe process.

“We are going to have self-driving vehicles,” he said. “But we can make this safe and acceptable. I’m not in favor of driverless vehicles unless we can make sure these things are safe and this program is made to do that.”

The university will partner with the Iowa Department of Transportation and Iowa State University to propose the Automated Driving System for Rural America project. The project aims to improve road safety in rural areas while also benefitting those areas with automated driving vehicle research.

The project will take place in Eastern Iowa area and will drive in a loop starting in Iowa City. The route will then go through small towns with rural roads to be able to exemplify how the Automated Driving System can bridge small towns with safe transportation.

“Iowa is committed to leading the nation in automated vehicle safety and research,” he said.

Director of the Iowa Department of Transportation Mark Lowe agreed with McGehee and Loebsack, according to the same press release.

“This is a huge win, not only for Iowans but for everyone who travels our nation’s rural roads,” Lowe said in the press release. “Current automated vehicle research mostly focuses on urban streets, but rural areas have a disproportionate rate of serious and fatal crashes and unique safety issues that should be considered as transportation technologies advance.”

With the investment and research the Automated Driving System for Rural America project will enhance mobility for transportation-challenged populations and improve safety nationwide on all roadways, specifically rural roadways, said the press release.

“Iowa is focused on enhancing safety on all of our nation’s roads, and the Iowa DOT is excited to partner with NADS on this project,” Lowe said.