The documentary Birth of the Cy-Hawk shows the trophy’s origin, made possible only by the fans. 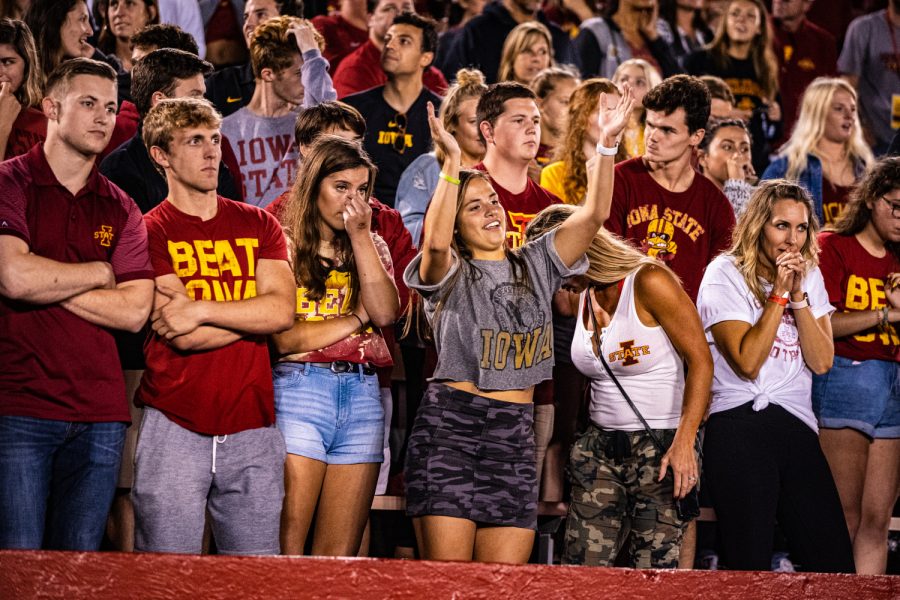 An Iowa fan celebrates a turnover on downs during a football game between Iowa and Iowa State at Jack Trice Stadium in Ames on Saturday, September 14, 2019. The Hawkeyes retained the Cy-Hawk Trophy for the fifth consecutive year, downing the Cyclones, 18-17.

It may come as a surprise to current Hawkeye and Cyclone fans that the two teams haven’t always gone head-to-head every football season, but now Iowa and Iowa State fans alike can learn about the start of the rivalry series in the  new documentary film Birth of the Cy-Hawk.

The film’s director and producer Ben Godar, an Iowa native, grew up as a college-football fan and said he wanted to bring the Cy-Hawk series’ origin story to fans.

“[I] felt really steeped in the game and the history of the rivalry, and I had no idea about this,” he said.

Before 1977, the Hawkeyes and Cyclones had not played against each other for 43 years. The game returned following outcry from the two fanbases for the return of the rivalry games. A lawmaker also asked the two university presidents to create a series with both teams competing for the Cy-Hawk trophy.

Godar said he learned of this origin story in the late 2000s from a childhood friend whose father was Bob Uetz, one of the Cy-Hawk trophy’s primary creators.

After learning of the trophy’s origins, Godar said, his fascination grew over the years, and soon  he brainstormed the idea for a documentary. Given his background in screenwriting, Godar said he felt he needed to make this film.

The story of the film follows some fans and their reactions to the first Iowa State University and University of Iowa game since the 43-year hiatus, played for the simple walnut and brass Cy-Hawk trophy.

Birth of the Cy-Hawk has toured around the state since April. The film débuted at Julien Dubuque Film Festival. It recently premiered in Ames and was shown Sept. 7 at FilmScene in Iowa City.

“It’s a very Iowa story,” FilmScene co-founder Andrew Sherburne said. “You can’t get much more Iowa than the Hawkeyes versus the Cyclones.”

Assistant Athletics Director Steve Roe said the term “rivalry” is thrown around often, but this particular rivalry should be enjoyed in good fun and with respect.

“I think amongst the players and the coaches, there’s respect [toward ISU],” Roe said.

Although the original Cy-Hawk trophy was replaced in 2011, Godar said he hopes to show the history that many Iowa fans never knew existed by premiering the film.

“When they stopped using this trophy, a piece of history was kind of lost there,” Godar said. “It was a piece that wasn’t very well known, so I just want to make sure this story of these guys and ordinary fans are known by people.”

Godar said the film has been a passion project. After years of interviews and production, fans can now see their influence on the public.

“This series would not have restarted if not for the fans; they were really the ones that drove that,” Godar said. “To me, this trophy is such a perfect embodiment of that, because the trophy itself also came from the fans.”