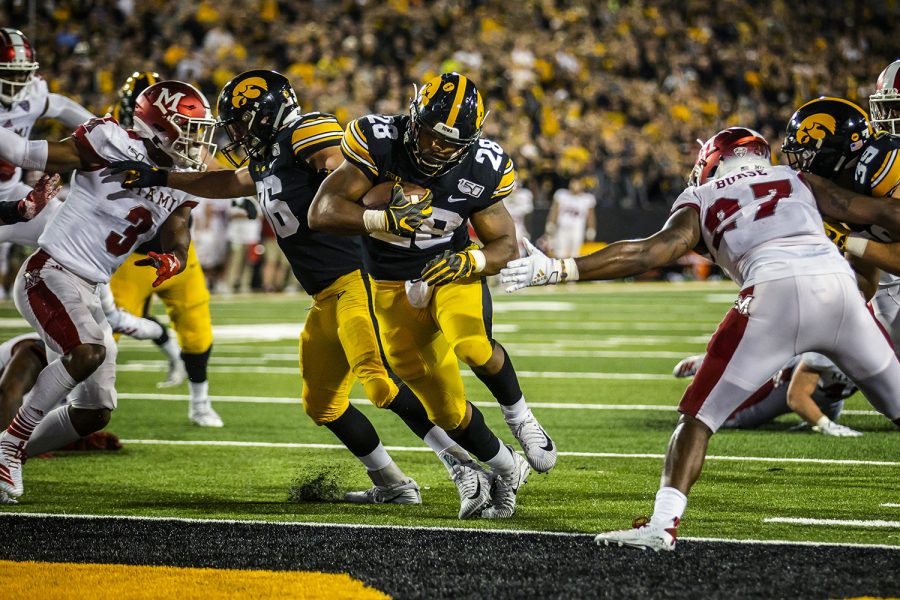 Iowa running back Toren Young scores a touchdown during the Iowa football game against Miami (Ohio) at Kinnick Stadium on Saturday, August 31, 2019. The Hawkeyes defeated the Redhawks 38-14.

Hawkeyes building a running back corps

Toren Young and Mekhi Sargent have stepped up in the running backs' room to be the go-to guys on the field, but that also comes with a sideline mentality.

It’s Sept. 1, 2018. It’s the third quarter, second and 4 from Iowa’s 48-yard line, and the Hawkeyes have a narrow 3-0 lead on Northern Illinois. Running back Toren Young is handed the ball, breaks the tackle by a defensive lineman at midfield, escapes another tackle at the 42-yard line and runs downfield before being tripped up at the 10.

Jump forward to Nov. 23, 2018. It’s the fourth quarter, first and 10. Again at Iowa’s 48-yard line, again with a one-score lead, 28-20, against Nebraska in the final game of the regular season. This time, it’s Mekhi Sargent, and his speed outraces the need for physicality. He crosses the first half of Kinnick’s midfield Tigerhawk at an angle before slanting up midfield, causing two Cornhuskers to crash into each other. He runs, wide open, to the 33-yard line where he then battles a Nebraska defensive back before stepping out of bounds near the 20.

Iowa’s running back corps is its bread and butter. When the passing game isn’t working, the run game can usually be counted on for a breakthrough or two.

“[The running backs] know that and the team knows that the running game helps significantly,” former Iowa running back LeShun Daniels said. “It can help out your defense, keeping them fresh, and obviously it helps your offense more because it opens up the passing game. If there’s a threat of running the football, it’s going to force the defense to play a little bit closer to the line of scrimmage.”

With a position as reliable as it has been in the past, one would think there’s a set system for what Iowa wants its running backs to do from year to year.

Including Wadley’s 2017 season, in only seven years of head coach Kirk Ferentz’s 20-year tenure has just a single Iowa running back been the dominant force in the backfield, rather than a rotation of two or three.

They work better together, and that stems from the running backs’ room.

From individual to team

In high school, there’s often one main guy taking the carries. At Iowa, that’s not the case, and it’s something the running backs have to understand.

“Being an unselfish player should be a part of everyone’s nature, and in the running back room, I feel like we do a really good job of just helping each other learn from mistakes, competing with one another and going out there and playing our best game,” Sargent said.

Young’s been in the system for his entire collegiate career. But with Sargent transferring in from Iowa Western and being thrown into a three-man rotation in 2018 next to Young and Ivory Kelly-Martin, he stepped up and earned himself a spot on the two-deep depth chart.

Despite the changes in mentality from high school to Iowa — with a potential community-college stop in between — Iowa’s running back production on both the running and receiving sides has been key to beginning the season 2-0.

“It’s definitely different. You go to high school and you got your guy pretty much,” Young said. “But we gel really well as a group, we work hard, we compete, we push each other. It’s real fun to be part of a group like that because you see different guys getting in there and doing different things. It’s a very fun and competitive room, we’re real close, a close-knit family.”

Iowa’s running back rotation means that, in order to succeed, the backs have to work together. Raising the team’s total yardage means raising up each running back’s yards, not just one.

“Realistically, you can’t be in every play and there’s going to be different times where you’ve got to rotate and you’re not getting in the game as much as you may want,” Young said. “That’s the thing you’ve got to understand about having a rotation in the running back room. Different guys get different looks and different reps.”

When in the game, the mindset is simple — do what you have to do to make plays.

But while on the sidelines watching teammates try and make big plays, the mindset can change. It’s easy to get into the rut of being annoyed at the playing time and the opportunities, but even watching from the side brings a chance to become better.

“[I’m] just taking mental reps, looking at the looks and the plays that they’re getting, knowing that when I go in, I could get some of the same plays, the same look,” Young said.

And when one guy has a breakout run, the running back group gets giddy.

“If one guy goes out and makes a big run, we’re pushing the next guy to make a good run,” Young said. “It’s kind of contagious. When you see a guy making a play, you want to go out there and do it. So, when you get your chance, you’re going that much harder.”

Young and Sargent’s playing styles are different. It’s easy for anyone to see when looking close enough.

“I think both guys bring a really individual skill set in some ways,” offensive coordinator Brian Ferentz said. “Young is running the ball as good as he ever has, he’s a tempo setter, and Mekhi is kind of a jack of all trades, little bit of a utility knife.”

Young is a big, physical running back, creating openings for himself where the offensive line hasn’t. Against Miami (Ohio) in Week 1, he even showed a hint of a fullback role.

“[Young’s] biggest thing might be the power back,” Daniels said. “He’s a bigger guy, so he’s going to be doing a lot of short-yardage stuff and he’s going to be trying to run over opponents.”

Sargent is smaller in height and quicker on his feet, juking around defenders and cutting in where he needs to take the ball as far as possible.

“There was a run [Sargent] converted in front of our bench; it wasn’t really clean, and somehow, he got through there,” Kirk Ferentz said. “It looked like a four-yard gain, but it was a heck of a run to make those four yards. And he’s a great young guy, just works really hard and found his rhythm.”

They run the plays that are called, whether on their feet or in their minds, and it creates an opportunity for two very different running backs to make something unique out of the same play call.

“I would say that each of us have our different approaches to the game and different plays that we like to run, but when your number is called, you have to go out there and be a playmaker and make the most of the opportunity,” Sargent said.

Wadley and Daniels rotating in and each posting standout years in 2017 set the most recent base for Iowa’s running back system.

Young is the only current Hawkeye running back who played under Wadley and Daniels that year and seeing that type of success stemming from a rotation helped frame the mentality that now is present in the running back room.

“They had to rotate and both of them are a very capable back who could have took a lot of carries,” Young said. “Looking up to them, it was easy to buy into that and understand how things work.”

Wadley and Daniels’ chemistry was key to their success on the field in 2016.

Wadley finished the season with 1,081 net rushing yards, and Daniels ended his Iowa career with 1,058 his senior year.

“We knew each other well and we knew each other’s skillsets well, so we figured that our skill sets complemented each other’s pretty well which helped us have the most success,” Daniels said. “It obviously really came together in 2016 because neither of us really had egos, so it really didn’t matter who was going out because we knew that no matter who had a good game, it was going to help out the other back in some way.”

Iowa’s running back room is stacked, not just this year, but in years to come, and the mentality present now will pave the way for those now learning from Young and Sargent.

“The key [to success in a rotation] was really just not having an ego — that was really the biggest thing,” Daniels said. “Not getting selfish or anything like that because the young guys got to look up to you.”

Also in the running back room is freshman Tyler Goodson, who already has 19 carries on the season for 96 yards. His season-long run of 19 yards came against Rutgers when he tallied 53 rushing yards.

Daniels tweeted during Iowa’s game against Rutgers that Goodson looked like Wadley on one of his runs.

“He definitely has some skills. He’s got Akrum-esque skills,” Daniels said. “I think the future is going to be in good hands, everyone is relatively young. They’re all juniors and then there are a couple freshmen that can play some ball. I don’t think that they should have any problem running the ball as the years go by.”