Iowa football travels to Ames for this year’s edition of the CyHawk rivalry. 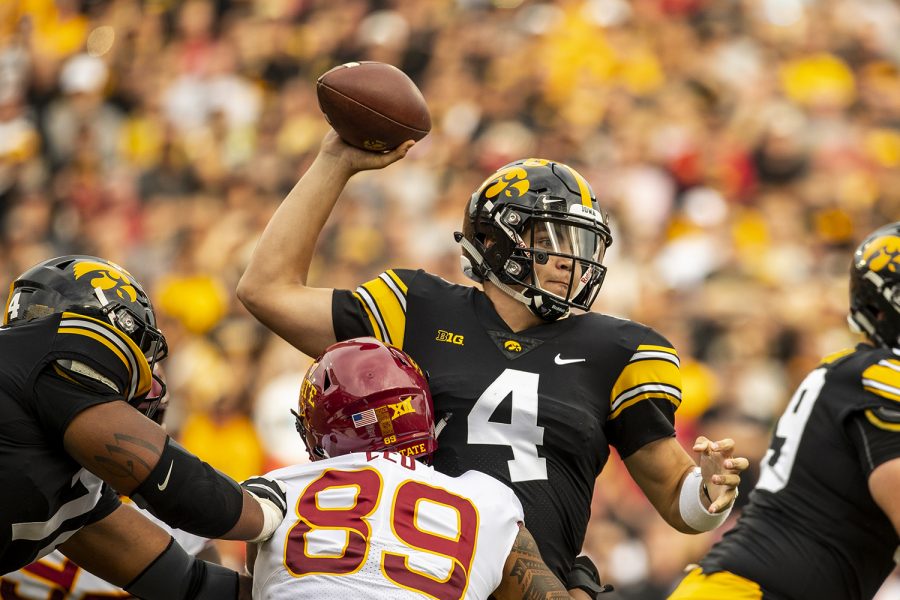 The entire state, it seems, is counting down the seconds until Saturday. Social-media battles among fan bases are relentless. The word “State” is being thrown around Iowa City with a nonprintable word attached in front of it.

It must be Cy-Hawk Week.

This year’s edition of the Iowa-Iowa State rivalry is as highly anticipated as any in recent memory. Both teams were ranked in the first week AP Poll, and neither team has suffered a loss this season.

A tightly contested game is expected, which is nothing new for Iowa head coach Kirk Ferentz, who is fairly well-versed in the state’s biggest rivalry.

“It’s my 30th year in the rivalry now,” he said. “There are a couple of things that are always certainties in this ball game over the years. First of all, it’s going to be a really tense, competitive football game, always a challenge. And the other thing, it’s always going to be in an excellent environment. I think it’s true whether that’s here or there.”

The environment for this game in Ames will have an added flair to it this time around. ESPN’s “College GameDay” selected the Cy-Hawk matchup as the location for Week 3’s show.

It’s the first time for Ames to host the show; the Hawkeyes will make their eighth appearance. The environment at Jack Trice Stadium will be above and beyond that of a typical Iowa-Iowa State matchup, which already packs a punch or 17.

National attention will be on the game, which Ferentz points to as a good thing. However, Iowa will not be focused on the outside noise.

“I can’t remember what year it was [the last time Iowa appeared on ‘GameDay’],” Ferentz said. “It didn’t impact the game. I don’t think it will impact this one, either. The nice thing about it is, I don’t think a lot of people outside our state bounds necessarily understand the intensity of the rivalry and just what a great thing it is. So maybe that will add to the spotlight a little bit.”

As is the case every year, players from outside state lines join the rivalry.

Iowa running back Mekhi Sargent was not familiar with the battle for the Cy-Hawk Trophy during his time in growing up in Key West, Florida. Now as a full-blown Iowan, Sargent takes the rivalry seriously.

“I’m basically a native here now, so it’s important,” he said. “With this game, there’s a lot at stake. The last two games, they’re important as well, but this game means a lot to the football team, to the guys who grew up with this rivalry. It means a lot to the state of Iowa.”

Although Sargent considers himself a native of the Hawkeye State, he understands the increased importance of the rivalry to the members of the team who were born and raised in Iowa.

“It means everything to them,” Sargent said. “A lot of guys grew up wanting to play for the University of Iowa. This is like an in-state Super Bowl. We’ve got to go out there and compete our tails off.”

Iowa has competed well in the rivalry recently, having won the last four meetings in the Cy-Hawk rivalry, including the last three matchups in Ames.

With the recent stretch of wins in the series, no player on the Iowa roster has lost to the Cyclones.

Iowa quarterback Nate Stanley is well aware of the fight the Hawkeyes will need against their in-state rival to keep it that way.

“We feel that they’re a great team, and we feel like we’re a great team,” Stanley said. “So we know it’s going to be a hard-fought game. Ultimately, we know we are going to have to earn it.”