With the early injuries to Iowa’s offensive line, the key has been leadership and keeping the group working as one. 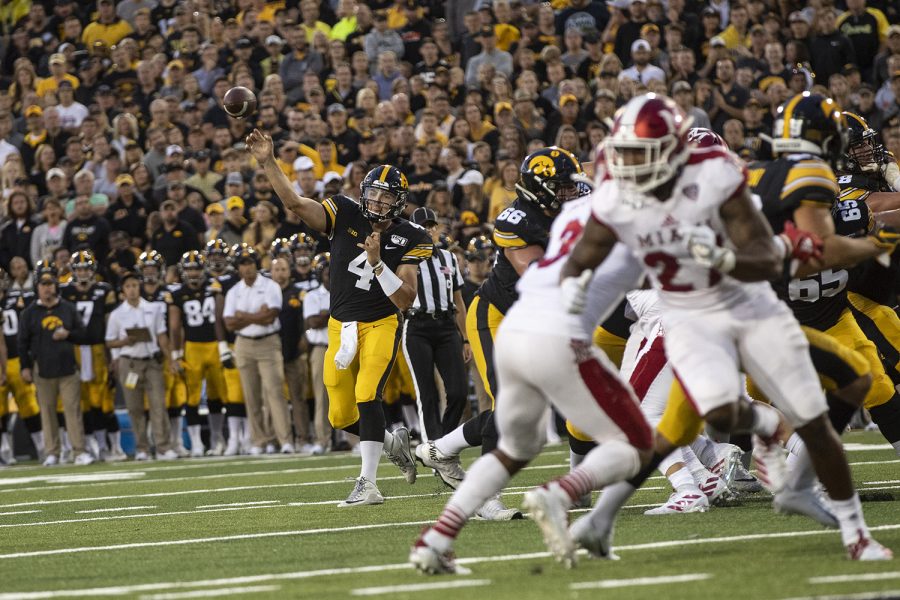 Iowa’s offensive line has worked on becoming a unit focuses on not missing a beat in the wake of graduations and injuries since January.

Alaric Jackson was hurt during Iowa’s season-opener against Miami (Ohio), and the members of the offensive line was forced to step up and show what they can do without a major part.

“I didn’t notice any different,” quarterback Nate Stanley said following the win against the RedHawks. “I don’t think we missed a beat out there on offense, and that’s huge to know that we have those guys that can step in if something happens to somebody.”

A key part of having that fluidity from the bench to the starters is the entire offensive line being led by two of its own. Last season, senior Keegan Render was the unlikely leader to step up. Now, it’s the Paulsen twins.

With Landan Paulsen at left guard and Levi Paulsen at right tackle, the brothers have stepped up to lead the charge this season and made the offensive line become one unit.

“Me and Levi, we’re really trying to bring this offensive line together and really get everybody going in the same direction,” Landan Paulsen said. “Five guys blocking whatever look we get and having guys communicate and finish the job and play our best.”

That work in both bringing the O-line up to performance level and also bringing each other closer as a group has been a work in progress throughout the offseason.

“All of our training from January is building up to these moments,” Paulsen said. “Every week starting from January, we’ve been trying to get better as a team, get better as an offensive-line unit, and then down to individual. Every single day, every practice, every rep, that’s what we’re really invested in.”

Offensive lineman Cole Banwart, who saw all his action at right guard last year, has been out for the start of the season with an injury but has been practicing and could begin his 2019 season on Saturday.

Jackson’s return will also come sooner rather than later. There’s a possibility that he could see playing time during Iowa’s Week 5 game against Middle Tennessee State.

The offensive line has been in a rotation for the first two weeks, something that the Iowa offense will see more of with the addition of those two guys returning from injury.

“[Offensive-line] coach [Tim] Polasek does a good job with those guys,” running back Mekhi Sargent said. “They do a really good job of taking the coaching, and I feel like it carries on from practice. You should expect a big season from these guys.”

With the Iowa State matchup looming, Iowa’s offensive line is going to have to do more of the same for Stanley and Company to preform as it did against Rutgers.

“They gave me more than enough time to throw the ball. They did a great job protecting me, and then as then game went on, giving the running backs some holes to run through,” Stanley said.