Nicole “Dia” Webb is a second-year graduate student at the University of Iowa who uses her love for sculpting to create unique ceramic figures. 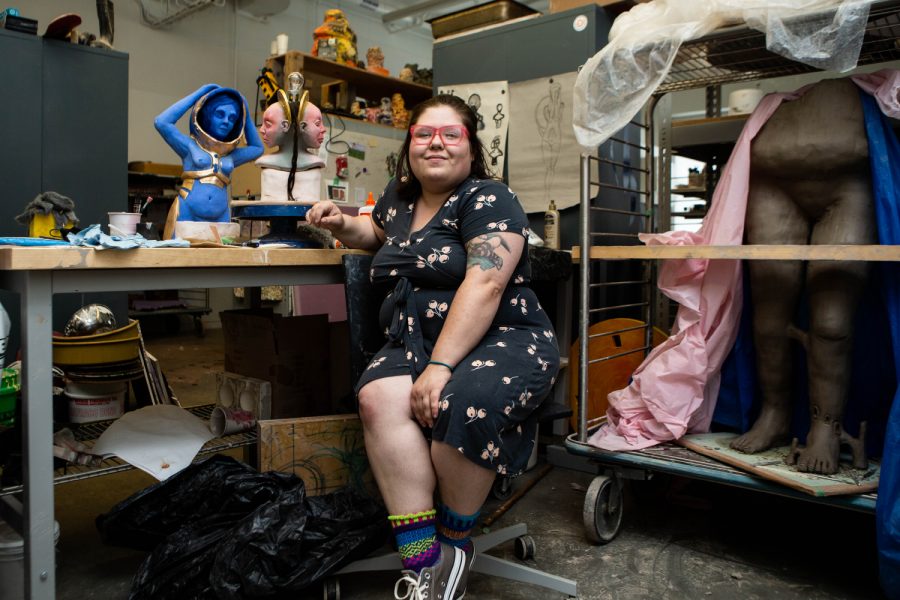 Ceramic bodies, busts, and tools scatter the workspace of graduate student  Nicole “Dia” Webb in the Visual Arts Building on the west side of the University of Iowa campus.

Webb said she was drawn to the UI because of its homey atmosphere and the kindness of other students. Before coming to the UI, Webb earned her bachelor’s degree at Kennesaw State University and completed a post-baccalaureate year at the University of Florida.

“[The UI] just really felt like home,” Webb said. “It was really inviting when I visited, and everybody was so nice.”

Webb said the moment that solidified her decision to study ceramics was enrolling in her Ceramics 1 class during undergrad, thinking she would become a potter.

“Then, the first time I sculpted a figure was when I really fell in love with it,” Webb said. “I think that was my last year of undergrad, and it was just something that I enjoyed. It’s a challenge that keeps on challenging me.”

In addition to getting accepted into the UI’s ceramics M.F.A. program, Webb highlighted another accomplishment of her piece “Finding God” being included in the 2019 Graduate Student Biennial’s Clay Studio. Recently, she also completed a residency at the Hambidge Center for Creative Arts & Sciences in Georgia.

After all of those accomplishments, Webb said she has her heart set on achieving other goals. In addition to ceramics, Webb also practices mixed-media sculpting, where she often uses different, uncommon mediums such as human hair and resin.

Throughout her years of education, the most significant thing that Webb said she has learned about herself is how to build her confidence and work ethic.

“You never know who you’re going to meet in this field, and you’re able to relate to these people in ways that you might not completely understand,” she said.

Despite her years of experience, Webb said she still has a long way to go to improve her art. After graduation, Webb said she wants to take over the world.

“Honestly, I hope to make art after I’m done here and be able to change the world with what I’m trying to do,” Webb said.