The University of Iowa offers an international program called Global Buddies to integrate J-1 students into the life of Iowa college. 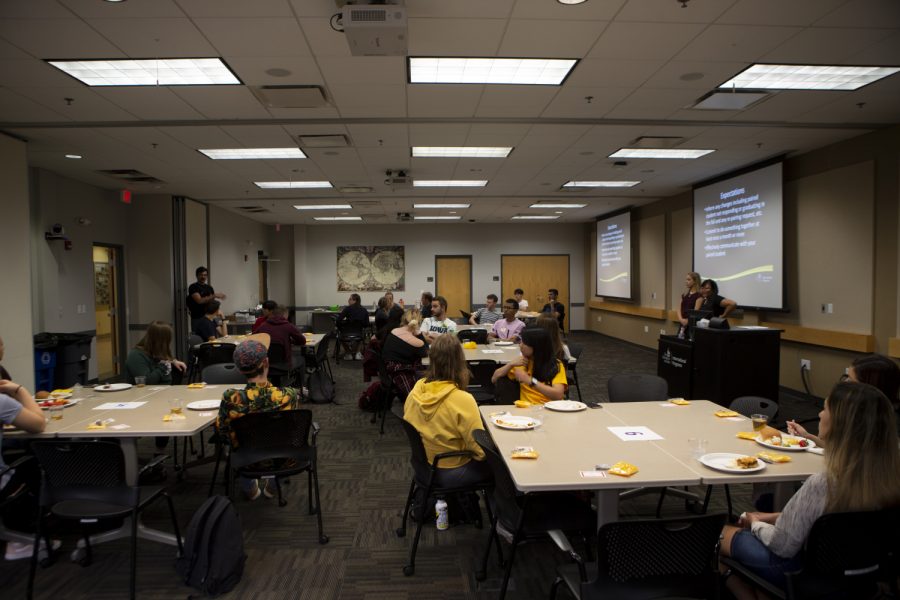 Students eat a “midwestern-style supper” during the Global Buddies program kick-off on Tuesday, Sept. 10, 2019. Global Buddies is a program that pairs international students with domestic students.

Pen pals – the epitome of childhood cultural friendships. Children all over the world wrote letters to send to other countries for domestic kids to read and reply to. In grade school and high school, kids are introduced to foreign exchange students.

At the University of Iowa, however, students are introduced to international programs such as Friends Without Borders, and the less-known program, Global Buddies.

Taivna Mills, the Global Buddies Coordinator, has been a part of the program for two and a half years, after being randomly introduced to the organization.

Mills spoke about the difference between J-1 students’ time on campus compared to F-1 students who are part of the Friends Without Borders program, and who are on campus for a longer period of time.

“Global Buddies followed the Friends Without Borders program, because they thought, ‘why not have a program like that for J-1’s?’ They’re here on campus for such a short time, and we want them to be exposed to as many traditional cultures as possible,” Mills said.

“There are people who are from different countries who might need some cultural experiences while they are here to make a positive difference in their time here,” Mills said. “Most international students, they don’t have those friends to show them the traditions and experiences.”

Mills said that the integration between domestic and international students is important for adjusting to campus and to the United States, as well as domestic students getting the chance to learn about different cultures and countries.

“I think the program is a wonderful way to send a strong message about friendship and being welcoming and being kind to each other,” she said.

“I thought it looked fun and it looked like a good way to get involved on campus,” Hytrek said.

International student and business major Se Hyeon Jung from South Korea also took part in the Global Buddies program. Jung said he chose the UI because of the football games and the business program.

“I heard that Iowa is really famous for football games, so I was really interested in watching football games and meeting friends there,” Jung said. “Also, I like the business course at the University of Iowa, so I chose this school.”

In addition to making international friends, the Global Buddies program offers different activities for buddies to attend and get to know other students. Many of these programs are shared with Friends Without Borders participants.

Aside from the 2019 Global Buddies kick-off party, the program leaders have planned a trip to Wilson’s Orchard, a homecoming parade watching party, a Halloween party, and a pizza and game night for the fall semester.