Two members of the Tippie faculty will open a new shop downtown focused on the kitchen experience. 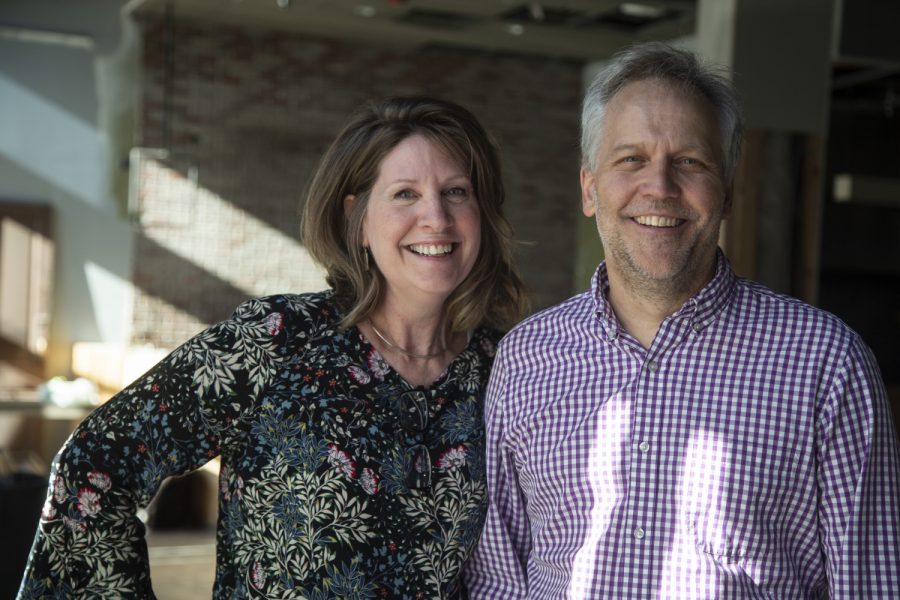 Owners Susan and Kevin Felker stand in the space that will become Prairie Kitchen on Wednesday, August 28, 2019. Prairie Kitchen is set to open in the spring of 2020. (Jenna Galligan/The Daily Iowan)

A Hawkeye family is planning to open a new kitchen store in downtown Iowa City next spring that boasts both basic kitchen utensils and community trivia nights.

The family-owned Prairie Kitchen Store will be located at 160 N. Linn St. and is expected to open in April 2020. According to the owners — Tippie College of Business Assistant Dean Susan Felker, Tippie lecturer Kevin Felker, and their son Alex — the store will be more than an average kitchen shop.

“It is going to be a little bit different than a kitchen store,” Susan Felker said. “We are going to have a few features that will be unique.”

The Felkers said years of cooking and sharing food with family and friends inspired them to open the Prairie Kitchen Store. To the Felkers, the shop is like an expansion of their own kitchen and the meaningful moments they have experienced there, which is an experience they said they want to bring to Iowa City.

“[The store] brought together the passion of having family and friends around the kitchen and business,” Susan Felker said.

The shop will offer a mixture of basic kitchen products, vintage and rare kitchen items, and products from the store’s own maker’s lab.

The Felkers have placed banners in the windows of the store that read “cook, gather, learn, shop.” Kevin Felker said this defines the Prairie Kitchen Store experience.

“It’s more than just kitchen gadgets,” he said. “It’s an experience where you can gather, learn about cooking, and buy a spatula.”

In addition to the wide selection of kitchen products, the family said that Prairie Kitchen Store will offer a multitude of community events and private events.

“We will have kitchen-type events like cooking demonstrations and classes, but we also are going to do community events — author talks, speakers, trivia nights, book clubs, knitting circles,” Susan Felker said.

In addition to the shop and events, the store will serve a variety of beer, wine, coffee, and tea. The Felkers want the store to feel casual and welcoming as if customers are actually in someone’s kitchen.

“[These aspects] make it more of a destination,” Susan Felker said. “You can sip and stroll while you shop, you can sit down and have a cup of coffee, you can eat and look at some product.”

The Felkers are not worried about any competition and are confident in the uniqueness of their store.

“There is enough space for more than one seller of kitchen items,” Susan said. “More people to the party is a good thing.”

“It is a great fit for downtown that is really experiential,” Bird said. “The Prairie Kitchen Store will be such a good complement to our other stores.”

Bird said the Iowa City Downtown District has had a kitchen store on its list of retail strategies for some time.

The Felkers said people from the community have already approached them and shared their excitement for the arrival of a kitchen store.

“People are saying, ‘This is exactly what we want,’ ” Susan Felker said.

The Prairie Kitchen Store will have a presence during Oktoberfest and will have a pop-up shop at local fashion store Textiles during the holidays.

“It won’t open until April of next year, but support has already been super high,” Bird said. “People are familiar with the Felkers and what great work they’ve done as part of the university community.”