A little more than a year after UI student Mollie Tibbetts’ death, her family remembers her life and works to share her spirit with the community. 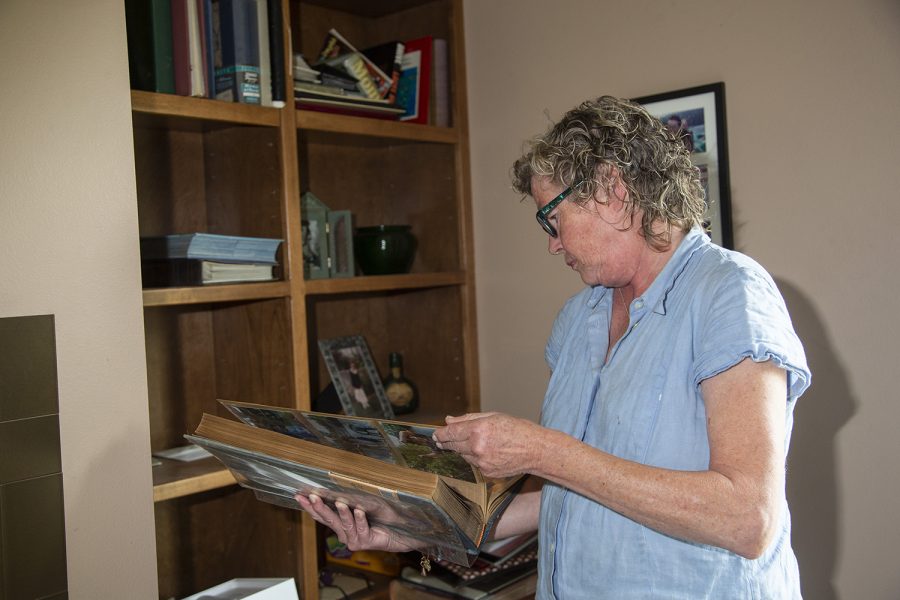 Laura Calderwood looks through a scrapbook during an interview in her home in Brooklyn, Iowa on Aug. 30, 2019.

Hanging on the wall in Laura Calderwood’s bedroom is a self-portrait her daughter, Mollie Tibbetts, drew when she was 5.

The picture is large, and Mollie’s crayon-drawn face dominates the tan paper. Brown swirls of hair frame her circular face, and a red-crayon smile stretches up her cheeks. Teal, Mollie’s favorite color, is scribbled in the background and fills up the heart necklace worn around her neck.

Mollie offered to sell it to her mom for $5, which Calderwood just happened to have in her purse.

Laura smiled as she told the story, laughing at her daughter’s antics like it happened just yesterday.

A little more than one year after Mollie’s tragic murder, The Daily Iowan spoke with members of the former University of Iowa student’s family. While they still struggle with the realities of her death, Mollie’s legacy lives on.

Mollie was a smartass, her mom said, and a pack rat with a curious streak. Kim Calderwood, her sister and Mollie’s aunt, said she thought Mollie had no flaws; she was focused, hard-working, and amazing with kids.

“I never saw her without a smile on her face,” she said.

Morgan Collum, Mollie’s cousin, said they were as close as sisters. Because of both their physical and emotional connections, the two would play, laugh, and of course argue with each other.

Morgan said she loved Mollie dearly, but she was a person like everyone else. She had an old soul, she said, and brought a unique perspective to the world.

The trait all three women mentioned was Mollie’s goofball tendencies.

Morgan recalled one night when she, Mollie, and some friends were hanging out at Mollie’s house. They were stuck inside because of the rain, Morgan said, and they were playing truth or dare. A friend dared Mollie to go roll around in a mud puddle, and while she didn’t fulfill the dare completely, she did dance in the rain, to everyone’s amusement.

During the summer of 2018, Mollie popped over to Kim’s house, where she was getting ready for a dinner she was hosting. When Mollie saw what Kim was making, she joked, “God, Kimmie, who makes soup in the summer?”

That was the last time Kim saw her.

Mollie went missing in July 2018, and her body was found about one month later on Aug. 21. Laura said she doesn’t really pay attention to the specific dates, although the six-month anniversary hit her hard when someone posted about it online. She said that prepared her for the one-year anniversary, and she brought her sons to Des Moines, where they had dinner with family.

“Your brain protects your heart from what it can’t handle,” she said.