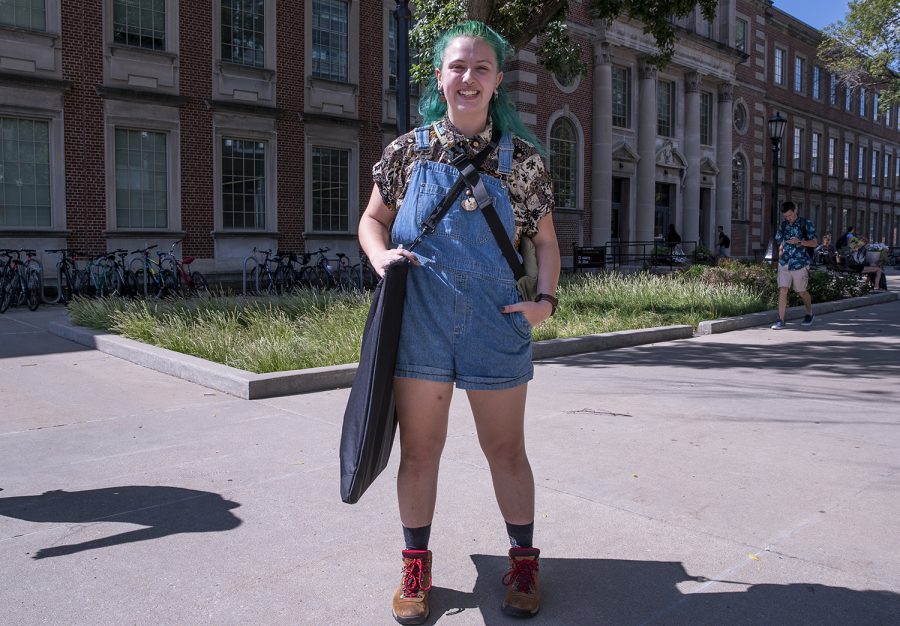 University of Iowa Freshman, Eliza Link poses for a portrait on the Anne Cleary Walkway on Thursday, August 29th, 2019.

The 1980s burst onto the scene with bright colors, double denim, and mismatched patterns, while the 90s took a deep dive into the grunge era with plaid flannels, choker necklaces, and an all-around darker appearance. On the University of Iowa campus, there is a healthy mix of both styles returning in 2019.

Retro styles have begun to dominate the fashion industry, and the residents of Iowa City are wrapped around this trend like the fanny packs attached to their waists.

Should one take a stroll on campus, the eye is bound to catch a glimpse of some of these fads. Whether it’s a popular 80s style like acid washed jeans or a more controversial style like off-the-shoulder sweaters, these outfits have been given a modern twist and appear very fashionable today. Loved or hated, these fads of the 80s and 90s are undoubtedly making a comeback among college students.

“I am inspired by old kinds of fashion, so I look at pictures and stuff and sort of base my outfits on that,” Baltimore said.

Baltimore said she enjoys thrift shopping since she can find a lot of unique styles and clothing that no one else has.

Double denim hit peak popularity in the 80s, usually worn among youth and rock ‘n’ roll subcultures. Today, double denim is worn by students of all subcultures. Typically, this particular fashion includes denim jeans – a majority of them with pre-made holes and tears – and a denim jacket, sometimes covered in patches, ranging from simple patterns to symbolic designs.

Jean jackets began making their comeback in early 2015, when celebrities like Miley Cyrus, Bella Thorne, and Zendaya were seen in public rocking them to complete their outing looks. Now, double denim is one of the most popular vintage styles among teens and young adults.

Double denim is not the only trend making a comeback. A popular retro male clothing trend – striped polo shirts and cuffed pants – is exactly what freshman James Gulden was wearing around campus on Wednesday.

“My fashion goal is to wear things that only I can pull off,” Gulden said. “Often, that means wearing dad clothes, or grandad clothes, which is where the whole retro vibe comes in.”

Aside from rappers, Gulden’s biggest fashion icons are his own father and grandfather.

“You dress how you were raised,” he said. “My fashion has evolved a lot. I’m trying to find weirder and stranger patterns and colors and shapes.”

Gulden prefers to shop at thrift stores and online stores for his ensembles.

Freshman Eliza Link, who was wearing overall shorts with a Hawaiian button-up shirt, said, “I think that generally fashion cycles every couple of decades.”

Link’s shopping consists of thrift stores and secondhand shops, then Link alters the clothes herself to fit her own style.

While these trends are popular on campus, it is not the dominant style. Casual and comfy is more popular, but no matter where someone goes in Iowa City, one can be bound to see some type of retro style, whether it’s a fanny pack, cuffed pants, flannels, or neon colors. The 80s and 90s are definitely making a comeback, but only time will tell if these trends will stick throughout the year.