The UI Femineers program, the first of its kind outside of California, provides opportunities in STEM fields for girls in grades 6-12. The program is expands technology into the world of fashion through wearable technology training. 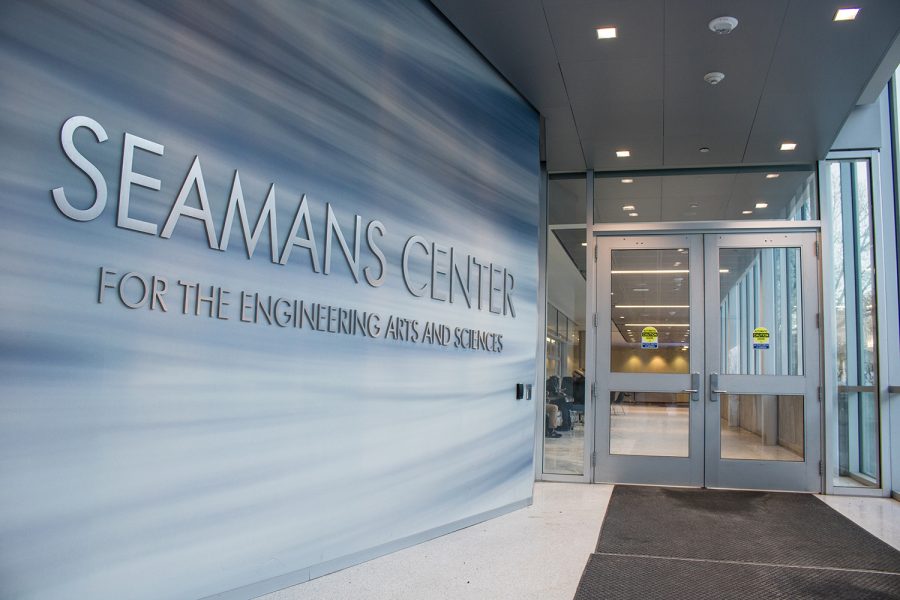 The Seamans Center for the Engineering Arts and Sciences is seen on Tuesday, January 29, 2019. (Shivansh Ahuja/The Daily Iowan)

A growing teacher-training program at the University of Iowa is aimed at increasing the number of engineering degrees awarded to women in the state of Iowa by providing middle and high school-aged girls access to opportunities in STEM.

The UI Femineers program trains teachers for opportunities designed to expose young women to STEM. According to the National Center for Education Statistics, only 18 percent of engineering degrees in Iowa are awarded to women. Data from the Society of Women Engineers also show that 13 percent of engineers in the workforce are women.

The Femineers program was developed at California State Polytechnic Institute, Pomona in 2013 and provided training and curriculum to teachers, hoping to spark an interest in engineering and technology in their female students from grades 6-12.

The UI program is the first Femineers affiliate located outside of California. It began with two Iowa high schools in 2017 and is expanding to five affiliated high schools for the 2019-20 school year.

Currently, the program is expanding its scope by adding wearable technology modules and combining arts and engineering through fashion.

Chelle Lehman, the affiliate director of the Femineers program at the UI, said the program brings together arts and science through its teaching.

“The Femineers program really is a focus on not just STEM, but STEAM, so it really brings the arts into technology and engineering,” Lehman said. “It really does a great job of engaging students in technology who originally wouldn’t have been interested.”

Chris Patterson, who teaches engineering at Linn-Marr High School in Marion, Iowa, recently attended training in the wearable technology module in Pomona. Patterson plans to implement the program with students this year and serve as a master teacher for the Femineer program.

Patterson said the wearable technology program will have more flair than the previous creative robotics module.

“Creative robotics is fun, but the things we created weren’t flashy, weren’t eye catching. Wearable [technology], it’s LEDs, it’s flashing lights, changing colors, so it really grabs your attention,” Patterson said. “There are more designers out there in the world that are starting to put technology into their clothing—so I think when girls see that it’s going to make them excited about this new module we’re adding.”

The full wearable technology training program will be available to teachers in Iowa starting in the summer of 2020.

Patterson hosts the Femineers program as an after-school club, which has around 10 members. He said the club is a tight-knit group.

“It’s really neat. We have a small family now,” he said. “It’s built our own little female engineering community at our school.”

Katelyn Murhammer, president of the UI Society of Women Engineers, volunteers with the Femineers program. She said she was impressed by the enthusiasm of the students who presented their work.

“It was so wonderful to see all of the projects that the students had made,” Murhammer wrote in an email to The Daily Iowan. “I was truly amazed to see how creative the students were and how passionate they were when sharing details about their projects.”

Lehman hopes Femineers exposes girls to opportunities in STEM fields they may not have otherwise considered.

“We know that women are underrepresented in engineering and technology—specifically if we look at computer and electrical engineering and mechanical engineering, those numbers are even less represented,” she said. “Ultimately, our aim is to expose young women to opportunities in those fields, and maybe do it in a way that they wouldn’t have considered.”