The UI Provost’s Office updated community members regarding the Diversity, Equity, and Inclusion Action Plan implementation following TaJuan Wilson’s resignation as the leader of the division. 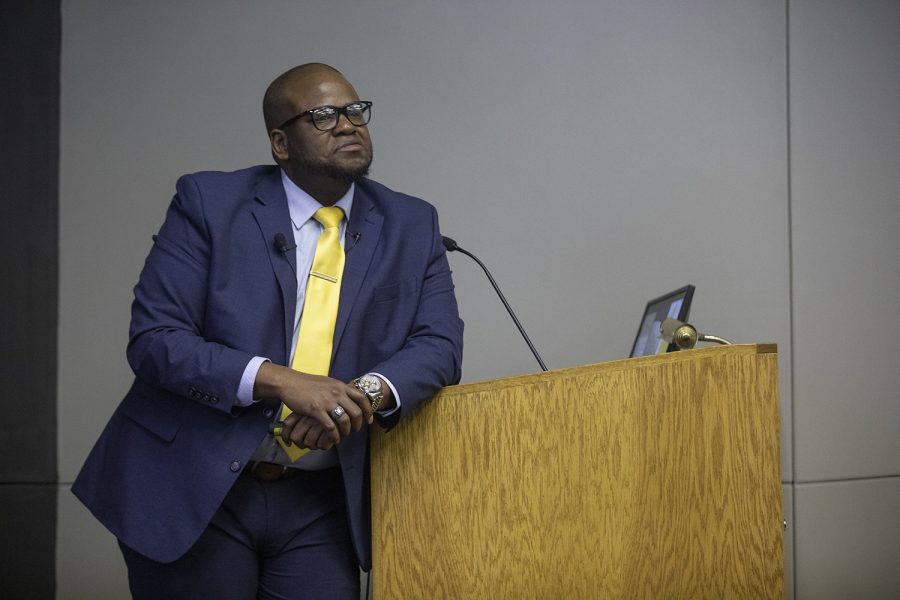 MUSC Executive Director of Student Programs and Student Diversity TaJuan Wilson speaks during the forum for the associate vice presidency of diversity, equity, and inclusion on March 25, 2019.

Following the resignation earlier this month of the associate vice president of Diversity, Equity, and Inclusion, the University of Iowa on Tuesday assured the campus community that its efforts to make a more inclusive campus and strengthen the campus climate will carry on as planned.

Also, Bria Marcelo, the director of Diversity Resources and Strategic Initiatives, will help implement the plan with a Path Forward work group.

The UI has taken the following steps already, according to the letter:

• There will be an external review of Student Disability Services, which will take place Sept. 22 to 24, and find a new place for the department’s office after community members have advocated for a more accessible location, as it is currently located in the basement of Burge Hall. This review will consist of team members from the University of Indiana, University of Texas at Austin, and University of North Carolina — Chapel Hill.

• As part of the strategy to increase graduation rates of underrepresented students, a Military and Veteran Students Task Force began meeting in June to provide more support to military and veteran UI students. The letter states that the task force will give recommendations on how best to give this support in October.

• Elizabeth Lara was hired as the Graduate College diversity, equity, and inclusion director in May to support underrepresented graduate students and help recruit students to the UI.

• To improve disability accommodations across campus, the letter said, university human-resources Faculty and Staff Disability Services began helping pay for equipment, furniture, technology, and services for people with disabilities when need be through an Americans with Disabilities Act Employment Accommodation Fund two-year pilot program. The program will be reviewed every six months, with the next review on Jan. 1, and will be completed on July 1, 2021.

• A data specialist is also being recruited to provide data-driven information that will help the department with diversity, equity, and inclusion decision-making. Someone is expected to start in this position this semester.

This progress comes after UI officials announced the 2019-21 Diversity, Equity, and Inclusion Action Plan on April 4 as a way to support students, faculty, and staff of all identities. It outlines the things UI leaders plan to accomplish in the next two years to improve the campus climate at the UI.

The Daily Iowan previously reported that about 70 percent of people on the UI campus said they felt somewhat or very satisfied with the UI environment on a campus-climate survey, but these answers varied depending on race, sexual orientation, gender identity, and other classifications.

To keep the plan on track, the letter said, the Center for Diversity and Enrichment, Office of Equal Opportunity and Diversity, and Diversity Resources — the units that make up the Division of Diversity, Equity, and Inclusion — will report to the Provost’s Office after the resignation of Wilson, who served in the role for seven weeks.