Blue Moose Tap House to close by the end of September

After bringing live bands into its dual-stage music venue and bar for nearly a decade, The Blue Moose Tap House will leave downtown Iowa City by the end of September. 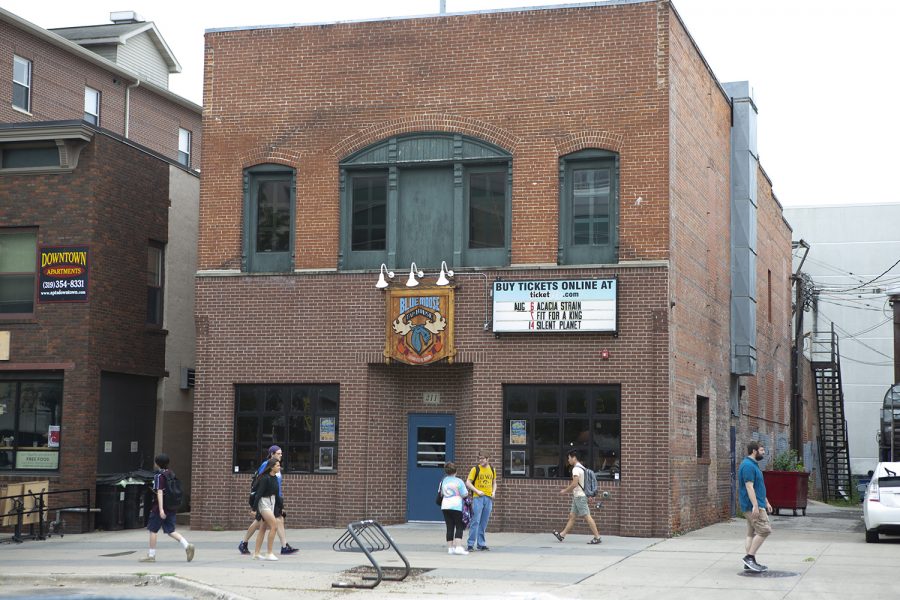 Serving as a bar and dual-stage music venue for downtown Iowa City for the past decade, Blue Moose Tap House, 211 Iowa Ave., is closing its doors for good.

The official closing date is set for Sept. 28, and the building will be left vacant until a new tenant takes up its lease.

The popular show venue has hosted popular bands and musical artists, including 21 Savage, Macklemore & Ryan Lewis, and Of Mice and Men, as well as countless local artists and DJ’s.

Nick Miller, the current owner of The Blue Moose as well as DC’s and The Field House in downtown Iowa City, said one of the reasons the venue decided not to renew its lease was the abundance of live music competition in the downtown area.

“There are a number of venues in town that do a really good job putting on shows and bringing good music to the Iowa City area,” Miller said in an email to The Daily Iowan.

Although there are no intentions to re-open the venue in a different location, Bird said the closure gives the opportunity for other types of entertainment venues to rise. She noted the space offers opportunities to potentially add on a rooftop element, similar to Joe’s Place and The Vue, and back up onto an alley that is currently in the process of being reimagined by the Iowa City downtown district.

“The nature of downtown Iowa City has changed a lot in the past 10 years, and we’re finding a new and increasing demand to be downtown,” Bird said. “We only have a finite number of properties, so I think what we’re trying to encourage property owners to do is reduce size and add commercial bays to incorporate additional tenants into their buildings that might open other opportunities.”

Tracey Barkalow, the property owner of Blue Moose since June, said he has already been in talks with several businesses out of Des Moines and local business owners to fill the space with some improvements on the previous business model.

“I think it needs to be kind of a restaurant with a bar mix,” Barkalow said. “Something more like the 30 Hop concept or Big Grove Brewery concept, or something to that level with maybe some live music still involved, but it’s got to be something targeted more of a craftier bar with some food to it to entice the younger-to-middle aged people.”

The loss of Blue Moose also means one less performance venue for organizations such as SCOPE at The University of Iowa to use to bring entertainment to the community.

SCOPE general manager Savannah Lane said the student organization often relies on venues such as Blue Moose and Gabe’s to hold more intimate performances for the artists they invite, since the rooms they are provided in the Iowa Memorial Union like the second floor Ballroom are often too big for some concerts.

“It definitely will take away one option of our list of places to do shows, which is unfortunate,” Lane said. “It’s a really important part of the music community here. Any show that we would consider for Blue Moose, we would just have to do at Gabe’s instead.”

As the bar and music venue enters its final month, Miller said Blue Moose will be hosting several events throughout its closing weeks, including shows by local promoters such as ESD Studios.

“In addition, our resident DJ will continue to put on some EDM concerts throughout September. A concert series called Free Bass will more than likely be our last show and for that we will bring in an artist named Kage who started the concert series years ago,” he said.