TaJuan Wilson, who resigned earlier this month as associate vice president for Diversity, Equity, and Inclusion, may job hunt during work hours, according to the terms of his separation agreement. 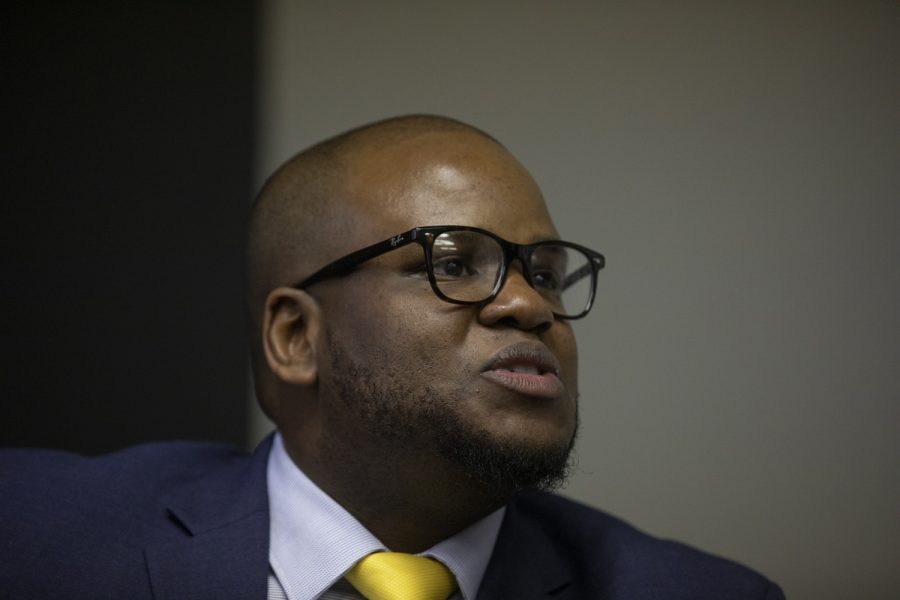 MUSC Executive Director of Student Programs and Student Diversity TaJuan Wilson speaks during the forum for the associate vice presidency of diversity, equity, and inclusion on March 25, 2019.

The University of Iowa administrator who resigned earlier this month after serving seven weeks as associate vice president for Diversity, Equity, and Inclusion signed an agreement to telecommute and is permitted to hunt for jobs during work hours while serving as special assistant to the vice president for External Relations.

In the contract Wilson signed April 11, the UI said it would it provide him $25,000 for moving expenses. The contract requested by The Daily Iowan stated he would have to repay the amount in full if he left within the first year of employment, but the UI waived that requirement as part of his separation agreement.

He also may use up to $7,500 for professional development and conferences while a UI employee, according to the separation agreement — half of the $15,000 provided to him for such purposes in his initial employment offer.

Per the terms of the agreement, Wilson waived his rights to take legal action against the state of Iowa, the UI, the regents, or any of their affiliates upon signing the agreement. He agreed he is not entitled to recover damages from the UI “relating to this subject matter.”

His original contract stipulated that his annual merit salary increases would be set by the provost and based on an annual performance review. UI media-relations Director Anne Bassett had previously told the DI in an email that he would keep his salary of $224,000 in his new role.

When Wilson secures employment outside the UI, the agreement stipulates that he will “voluntarily resign” from his employment with the UI no later than Jan. 31, 2020, including staff and faculty appointments. If Wilson engages in any consulting work, the agreement states it is not to be for the UI or any of its units.

The agreement is not an admission of liability or wrongdoing by the UI or the regents.

Wilson and the UI agreed to issue a “mutually agreeable public statement” regarding his resignation.

“Coming to Iowa was a leap of faith for me personally and professionally,” Wilson said in the statement released Aug. 15. “I have great respect for the university and the work being done in diversity, equity, and inclusion and believe Iowa has the potential to be on the right path. This opportunity will be wonderful for the right person, but it is not the right fit for me at this time.”

Wilson came from the Medical University of South Carolina and was selected in April to lead the UI Division of Diversity, Equity, and Inclusion. The UI announced Aug. 15 he will work with Vice President for External Relations Pete Matthes “on initiatives that support the university’s work to become a more inclusive and equitable campus” for the next five-and-one-half months.

Wilson’s selection for the job came after his predecessor, Georgina Dodge, left for a similar position at Bucknell University in Pennsylvania. The University of Maryland in March named Dodge the vice president of diversity and inclusion.

Two people assumed the role on an interim basis after Dodge’s departure in July 2017.

First filling the position was Lena Hill, who left in May 2018 to serve as dean of the College at Washington and Lee University in Virginia. Then, the UI tapped UI Vice President for Student Life Melissa Shivers to temporarily fill the role. She worked in both positions for more than a year after Hill’s departure.

In the search that resulted in Wilson’s hiring, Bassett said the UI paid $81,999 to search firm Isaacson, Miller for search expenses and an additional $21,593.21 to reimburse travel and advertising expenses.

The three unit leaders in the Division of Diversity, Equity, and Inclusion — which encompasses the Center for Diversity and Enrichment, the Office of Equal Opportunity and Diversity, and Diversity Resources — will report through the Provost’s Office.