Two influential people in Iowa politics, Iowa City natives Sue and Bob Dvorsky, announced who they'd endorse for president in early August ahead of a week of campaigning for more than 20 presidential hopefuls, tipping a cascade of endorsements in Iowa. 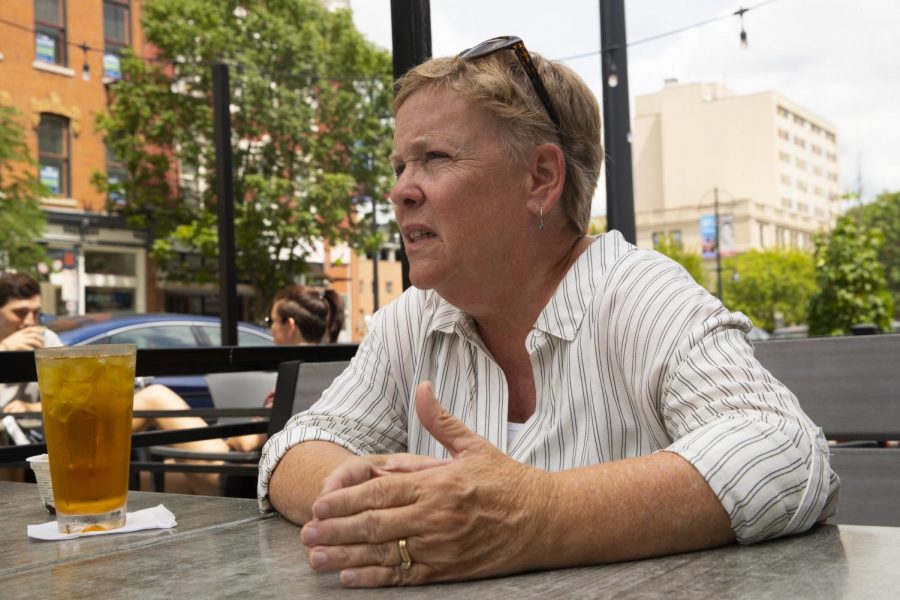 Whatever you do, don’t refer to Sue and Bob Dvorsky as a “power couple.”

Sue, a longtime Iowa City schoolteacher turned two-year chair of the Iowa Democratic Party, and her husband, Bob, a recent retiree from representing Johnson County in the Iowa Senate, endorsed the U.S. senator from California, Kamala Harris, in the 22-way race for the Democratic presidential nomination ahead of the Iowa State Fair in early August.

Their point of the finger earned favorable headlines from news outlets. CNN dubbed the Dvorskys as a “power couple,” and Politico writing that Harris clinched a “key Iowa endorsement.”

“Oh, good heavens, no,” Sue said in an interview with The Daily Iowan Aug. 15 when asked if she thinks the “power couple” title is fitting. “I’m a retired school teacher, he’s a retired legislator, our power — if we’ve got any power — it’s in our relationships.”

In February 2007, almost a year ahead of the 2008 caucuses, the Dvorskys publicly backed Barack Obama, and in 2016, Sue served as Hillary Clinton’s Women’s Engagement Director for Iowa.

“…I absolutely appreciate the sentiment, but really all we are, Bob and I, whatever kudos we get we get is because our deal — our ethic — is we show up, we do the work,” she said.

As presidential hopefuls reach the final six-month stretch until the February Iowa caucuses, more and more influential Iowans are signaling which candidate they will support for the nomination.

While Iowans may not make a caucus decision based on one person’s endorsement, public supporters can signal to Democratic circles which campaigns are gaining momentum and, more importantly, endorsers can come attached with some organizing work as well.

David Yepsen, a former Des Moines Register political columnist and current host of Iowa Press, said endorsements are important, but they can at times be overrated if they don’t come with a lot of political weight or local political guidance.

“They’re important at this stage in the game because people are starting to make decisions,” Yepsen said, adding that caucus-goers will likely look at the endorsement as one more piece of information needed to make their decision.

As for Sue Dvorsky’s endorsement specifically, Yepsen said “she knows the nooks and crannies of Iowa politics and can make sure to get (Kamala Harris) to the right places at the right time.”

Dvorsky said she and Bob wouldn’t take on an official job title with the campaign, but that they would make phone calls and provide advice for the Harris team, leveraging relationships they’ve built in Johnson County, the county with the highest concentration of Democrats in Iowa, and beyond.

They also coordinated their endorsement with the beginning of the Iowa State Fair, where they showed Harris around the fairgrounds for 45 minutes before and after her speech at the Des Moines Register Political Soapbox.

Harris flipped pork chops, got one on a stick to-go, ate an apple egg roll, visited the varied industries building where the Iowa Democratic Party set up a booth, all with a swarm of campaign staffers, and local and national media in tow.

Dvorsky compared the experience to being the ball in a kids’ soccer game. Listen to Dvorsky describe moving around the Iowa State Fair with Harris, and relate a story about Tim Kaine visiting the fair while she chaired the Iowa Democratic Party.

“The other thing we’re saying that it’s okay to start getting ready to make a decision,” Dvorsky said. This year the couple arrived at their decision later than normal, Dvorsky said, as Iowa has played host to nearly two-dozen Democratic hopefuls since 2017.

Though many endorsements have come earlier, in some cases much earlier, such as state Rep. Amy Nielsen, who represents the wester part and southeastern corner of Johnson County, pledging her support for Booker in February.

Candidates are also courting organizations as well as individuals. Sixteen Oval Office hopefuls laid out their pitch to union workers at the Iowa Federation of Labor Conference Aug. 21, and many spoke in front of Iowa’s Asian and Latino Coalition (before the organization’s board announced their support for Harris Aug. 12).

Endorsements from organizations and labor unions can pack a punch, Yepsen said, as often times the decision is come to with input from a wide network of local members who are likely to caucus in line with their membership.