The addition of bike lanes to Dodge and Governor Streets would remove approximately 80 on-street parking spots. Iowa City property owners and renters gave their thoughts on the plan at Wednesday's meeting. 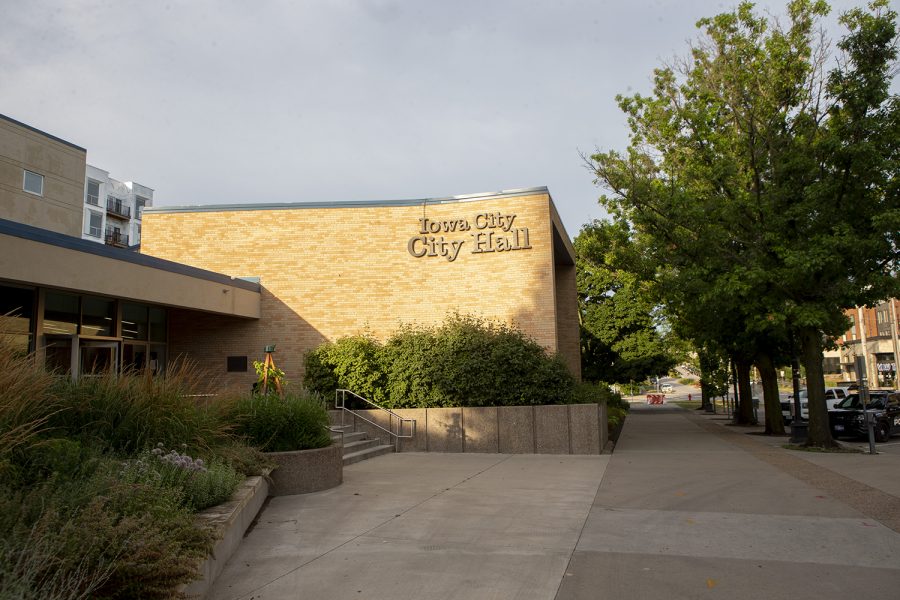 City Hall is seen on July 17, 2019. A variety of city government departments are housed within the building’s walls alongside the Iowa City City Council, which holds meetings in Emma J. Harvat Hall.

Iowa City landlords, tenants, and bike enthusiasts gathered at City Hall on the evening of Aug. 7 to discuss adding buffered bike lanes to Dodge and Governor Streets between Burlington and Bowery.

Iowa City senior engineer Jason Reichart and Metropolitan Planning Organization of Johnson County Executive Director Kent Ralston started the meeting and split the crowded room of people into two groups by what they came to speak about. Reichart led the meeting for people who came to speak specifically about the South Governor and Dodge project, mostly property owners and tenants in the area. Ralston spoke to people more interested in the Iowa City Bicycle Master Plan and biking in Iowa City.

The addition of bike lanes is part of the Iowa City Bicycle Master Plan, and Reichart said the purpose of the meeting was to get feedback from the public on this site-specific part of it and see whether the ideas discussed in the plan would be feasible.

“We didn’t want to make anyone think this was a done deal,” he said. “… We have a high-level plan, we’re narrowing it down to site-specific, we want to know what the concerns are.”

Iowa City is currently working on an asphalt resurfacing project, and Ralston said it would be a good time to add the bike lanes, if everyone agrees on the plan.

Many people at the meeting agreed that getting rid of parking would have negative consequences for property owners and renters.

Anne Freerks, a resident of Governor Street who served on Iowa City’s Planning and Zoning Commission when the Bicycle Master Plan was adopted, said not having enough parking puts many people, such as the elderly, in a bad situation. She described having her parents and other family members over to her home and the difficulty for them if there were no street parking.

“We have … two spots in a driveway; we don’t have alley access,” she said. “It [would make] our lives much more difficult.”

University of Iowa Associate Professor and Governor Street resident Sarah Bond, who also attended the meeting, said having both parking and a bike lane would be the best solution. She noted Dodge and Governor Streets are very different, so it would be difficult to apply the same plan to both.

One solution offered by the group for Governor Street was to revert it to a one-way street, add a bike lane, and keep the parking.

Bond, who cycles to the UI for work, said she thought making South Governor one-way is a great solution, because it would allow bicyclists to get off the sidewalk in a safe manner while still allowing people to have the parking they need.

“I think it’s a wonderful idea,” she said.

Reichart said his biggest takeaway from the meeting is that officials have a long way to go before making a decision.

“Based on what I’m hearing here tonight, we’re nowhere close to going to council,” he said. “We’re going to have to take a step back and evaluate the situation, see what other methods we can do.”