The University of Iowa hosted delegations from every Big Ten school’s student government at the annual Association of Big Ten Students Summer Conference. 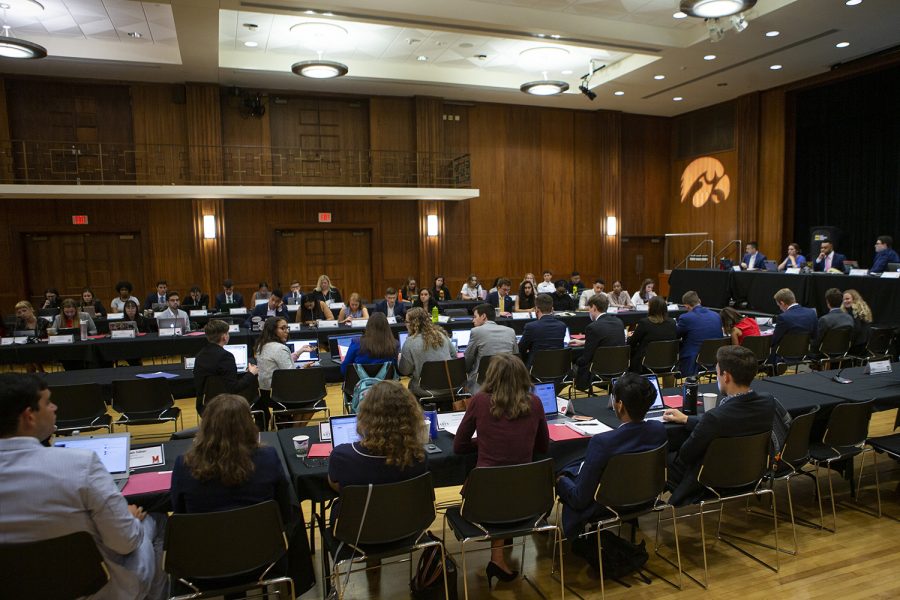 UISG senators discuss legislation for all Big 10 universities during the Big 10 UISG conference in the Second Floor Ballroom of the IMU on July 20, 2019.

Student governments from across the country came to the University of Iowa this past weekend to meet and discuss issues and topics that affect the student bodies they represent.

The University of Iowa Student Government hosted this year’s Association of Big Ten Students Summer Conference from July 19-21, bringing delegates from all 14 Big Ten schools’ student governments to the UI, where they had roundtable discussions and forums, listened to speakers, and went over legislation.

UISG Vice President Sarah Henry said each school sent around six students to the conference, and together they represented more than 500,000 Big Ten students.

On the morning of July 20, all the delegates met in the IMU Second Floor Ballroom to discuss nine pieces of legislation submitted by the different groups. UISG President Noel Mills said she was pleased with the amount and quality of legislation brought to the table.

The UI submitted two resolutions, both of which passed. The first was supported Big Ten undergraduate student governments declaring a climate emergency. The second backed the declaration of Indigenous Peoples’ Day. Mills said the pieces were written to be flexible, so other schools can work to apply them in a way that will work for their institutions.

“It allows schools to address topics in a way that they can best,” Mills said.

For UISG, she said, the legislation will be delegated to the person whose office the topic includes.

Students also participated in roundtables with themes focused on different positions and topics. Henry said there were roundtables for presidents and Big Ten student association liaisons, as well as discussions revolving around sustainability, governmental relations, and justice and equity.

“People with similar interests and goals can get together and have a discussion on their goals for the year, what’s worked in the past, what doesn’t work,” Henry said. “Basically just pick each other’s brains and figure out how they can best assume their positions for the next year,”

Mills said most of the people believed the weekend turned out to be very successful.

“People kind of sleep on Iowa, but they were absolutely thrilled with our campus and the people here,” she said. “It was just a great weekend to show Iowa off.”

According to the Big Ten student association website, its mission is to “increase information sharing and networking among student government organizations and serve as the active collective voice of students of the Big Ten Conference.”

Mills said the members are creating a video about what the association is and what it means to people to show to students in the fall.

UISG Director of Governmental Relations Connor Wooff said the conference had been very valuable to him because it allowed him to meet with people in positions very similar to his in other organizations. Henry noted the leadership development and networking opportunities presented at the conference were invaluable to students.

“Getting together, having those conversations, whether they’re in a roundtable … or forum setting, or if it’s just talking on the bus shuttle to our dinner at Kinnick, it’s creating those bonds that hopefully down the line we can either use what we learned at the conference or reach out to a new friend that we made,” she said. “We can ask them, ‘How did this work on your campus?’ ”