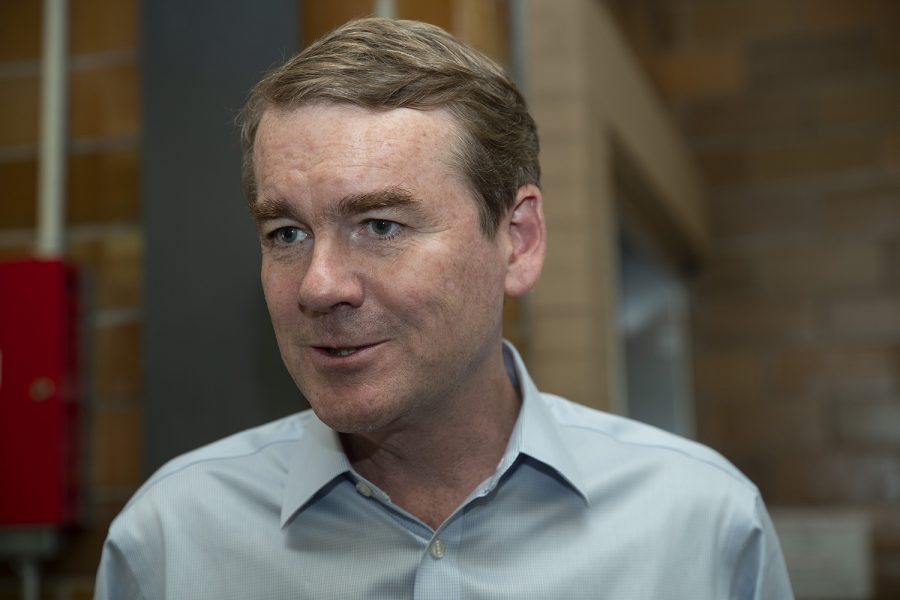 Senator Michael Bennet, D-CO, speaks with the press after a tour of the Stanley Hydraulics Lab on July 15, 2019. (Katie Goodale/The Daily Iowan)

Colorado Sen. Michael Bennet, a Democratic presidential-nomination candidate, made campaign stops in Iowa City on July 15 in which he touted a message of unity and restoring U.S. democracy.

“[The U.S.] still is the place where we exercise our rights to self-government, and we have to take it back from these people,” Bennet said, referring to some Republicans in Congress. “I believe in creating an agenda that unites Democrats.”

Bennet covered a wide range of topics in a crowded room at Wild Culture Kombucha, including the need to address climate change, make education more affordable, and expande on the Affordable Care Act.

During a Q&A, several attendees expressed their frustration with the rhetoric of the Trump administration, pointing to Trump’s dialogue around family separation at the U.S.-Mexico border. Others called on Bennet to “flip the narrative” — meaning, they want to see Democrats talking more about their achievements, specifically around immigration and border security.

Bennet referenced his book numerous times, The Land of Flickering Lights: Restoring America in an Age of Broken Politics, which details his message of how he thinks Trump and other Republicans have divided the country.

Bennet also visited the Iowa Flood Center during his stop — the country’s first academic center that focuses solely on flooding.

Bennet spoke with University of Iowa research engineers about the work the center does in monitoring water quality and flooding throughout Iowa. Agricultural runoff and rising water levels have remained problems in Iowa, and he said he hopes to depoliticize water quality and quantity issues.

“Facts and science, I think that’s a great starting point — having people have a shared understanding of facts and a sense of mutual responsibility that we share on all these issues,” Bennet told reporters. “I think it will give us a chance to succeed. Depoliticizing matters like this are really important if we want to make progress.”

Bennet has served as Colorado’s senator for 10 years, and he previously worked as a lawyer after graduating from Yale Law School. Bennet said in his 10 years as senator, he’s worked with his Republican colleagues on many pieces of bipartisan legislation.

Kristin Steingreaber, wholives close to the Missouri border and traveled 90 miles to hear Bennet speak, said she likes Bennet’s overall message and what he has to say about education and climate change.

“We have a unique opportunity and a responsibility in Iowa to get to know these people, and if you can take advantage of it on a nice night like this to drive up and listen to them — because they only get 10 minutes in a debate — it’s important to do that,” Steingreaber said.

She said Bennet in the top five on her list of favorite candidates, but it does worry her that Bennet lacks in name recognition among other voters, she said.

“I’ve never been a great bumper-sticker candidate, but I think people want someone who is the opposite of Trump, and I’m happy to fill that role,” Bennet said.