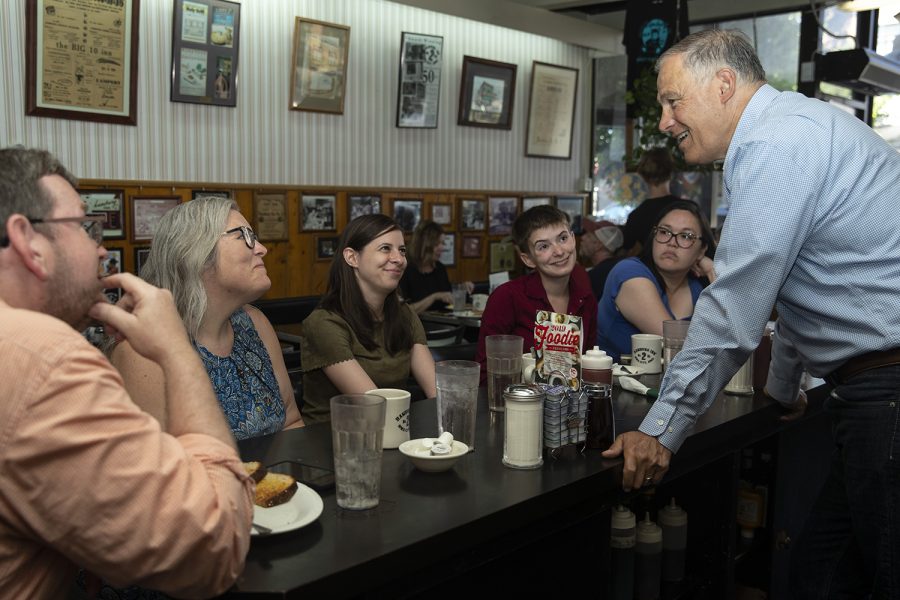 Governor of Washington Jay Inslee speaks with professors during his meeting with several non-tenured faculty members at the Hamburg Inn in Iowa City on July 15, 2019. Faculty members spoke with Inslee about some of the concerns they have regarding pay and job security. (Katie Goodale/The Daily Iowan)

Elena Carter, a member of Faculty Forward and a lecturer in the Rhetoric Department, said she liked Inslee’s plan to increase funding for public institutions.

“I think what I was really excited about was his plan to raise state funding for higher ed,” Carter said. “I think state funding is kind of the root of the struggles that we’re facing and that our students are facing.”

Inslee spoke about implementing a national program, similar to the Washington College Grant Program. Inslee’s proposal would provide students financial aid for college on a sliding scale based on income up to $150,000 and require the federal government to match the funding to the funding provided by the state.

Inslee met with several members of Faculty Forward, a group of nontenure-track faculty members at Hamburg Inn on July 15.

The faculty members were UI lecturers on three-year-contracts. They discussed tuition hikes, student debt, benefits, and health care with Inslee.

“We think this is very successful because it will make sure everyone’s got access to college without being swamped by debt,” Inslee said in an interview with The Daily Iowan.

While candidates such as Sens. Bernie Sanders and Elizabeth Warren have proposed plans to cancel all outstanding student-loan debt, Inslee has proposed a debt-relief plan for student loans based on income level.

“We think that’s the best way to handle the crushing debt burden for students,” Inslee said. “We think this is the best route because it treats everyone — where they live, what their economic circumstances are. It creates the greatest benefit for those most in need.”

Inslee also said he would advocate for higher wages for adjunct professors, saying a condition of his federal match program would require public institutions to pay faculty higher wages.

Beyond higher education, members of Faculty Forward are concerned with presidential candidates’ policies on collective bargaining.

“We are definitely concerned about collective bargaining rights broadly – just having a stronger ability to negotiate with our employers about benefits, working hours, pay,” said Anne Sand, a lecturer in the Rhetoric Department.

In May, the Iowa Supreme Court upheld a 2017 state law that changed Iowa’s collective-bargaining policies for public employees, limiting the bargaining to base wages.

“We would try to bring back up to scale the collective-bargaining rights of employees so they can form unions,” Inslee said. “We think this is pivotal in trying to get a pay raise.”

Sanders also spoke with nontenure-track faculty, noting his concerns about adjunct professor’s low wages in a July 3 interview with the DI.

RELATED: Bernie Sanders outlines his ideas for the future of college education

Sand said she was impressed by Faculty Forward’s meetings with both Inslee and Sanders.

She felt Inslee had a more robust baseline knowledge of issues facing higher education, while she was impressed with Sanders ability to listen to Faculty Forward’s concerns.

“I think what really impressed me about [Sanders] was his ability to listen in a super-attentive and caring way,” Sand said. “Even though he didn’t come into the meeting with maybe as much knowledge about the structure of higher ed and the problems facing higher ed, he was so attentive in listening to us and left the meeting with a really clear sense of the problem.”