The Open Gardens event held by Project GREEN this last weekend allowed visitors to view some of the best gardens in Iowa City. 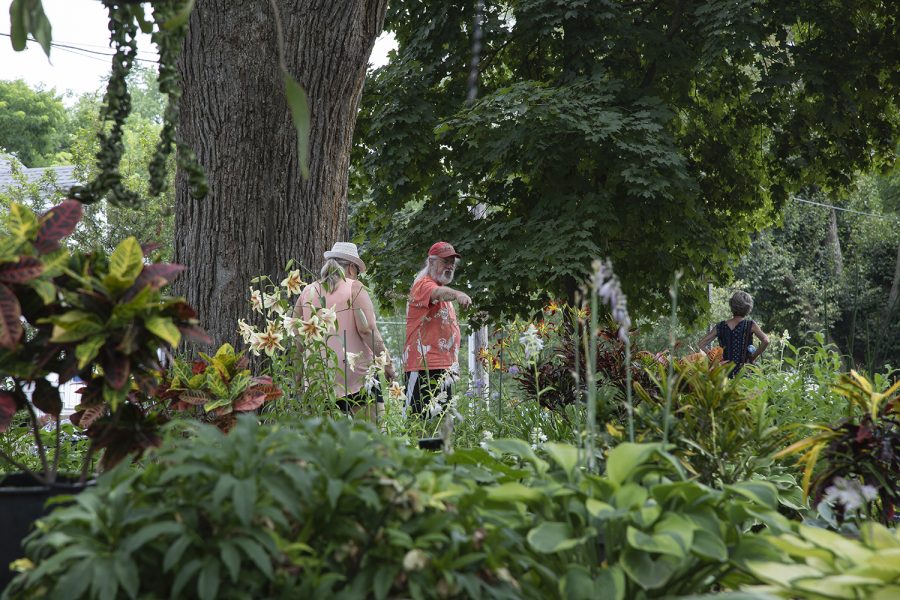 Philip Mears’ garden is a sight to behold. Potted plants hang from impossibly high tree branches. Every inch of ground, aside from a few winding paths, is covered in greenery. A small bird chirps from atop a fence while dainty flowers sway in the breeze.

This past weekend, Mears’ garden was featured in Project GREEN’s Open Gardens, in which the group invited the public to tour private gardens.

Maps containing the addresses of local gardeners were provided at local businesses sponsoring the event. The public was encouraged to visit 30 private gardens as well as landscapes maintained by Project GREEN and the Johnson County Master Gardeners.

“We really wanted to feature all kinds of gardens,” said Cindy Parsons, co-president of Project GREEN. “Even if it’s just people having potted plants on their porch or summer vegetable gardens, just really people that are proud of their yards.”

Open Gardens is different from past Project GREEN events.

“This year, instead of us going around finding gardens, we kind of opened it up to public places,” Parsons said. “People could nominate their own gardens by submitting their own applications, and we could feature some of their gardens on the tour.”

One of the homeowners featured on the tour, Philip Mears, says he spends eight to 10 hours a week in his garden.

Although he encourages people to visit his garden freely year-round, the event allowed him to show visitors around his yard and talk to them about it.

“I garden so people can come by and see it,” Mears said, “The idea that people share their gardens and get reinforced in their gardening is a good thing.”

Open Gardens was structured so that visitors could explore at their leisure, allowing them to spend as much time as they wanted at each stop.

“It’s kind of nice to be able to just come and go at your own pace,” said Erin Phelps, who attended the event.

Many visitors were gardeners themselves. Open Gardens allowed them to learn more about plants and gardening.

“I’m a young gardener,” Phelps said, “I get to talk to other people who have been doing it for many years and have a lot of knowledge and wisdom I don’t have.”

Project GREEN plans on expanding Open Gardens in the next few years.

“This year is limited to the city limits of Iowa City, and if it’s successful, then next year we’ll open it up to Johnson County,” Parsons said.

Open Gardens was modeled after the Buffalo, New York, Garden Walk. Project GREEN hopes to replicate those tours in the Iowa City area.

“It could really be an event that will benefit the city by bringing people in. It has potential, so we’re just starting out small this year,” Parsons said. “We’re hoping to make it an event that will bring in people from all over the place to Iowa City.”