The “Lights for Liberty: Vigil to End Human Concentration Camps” was held at College Green Park in Iowa City Friday night, along with a multitude of other vigils across the nation. 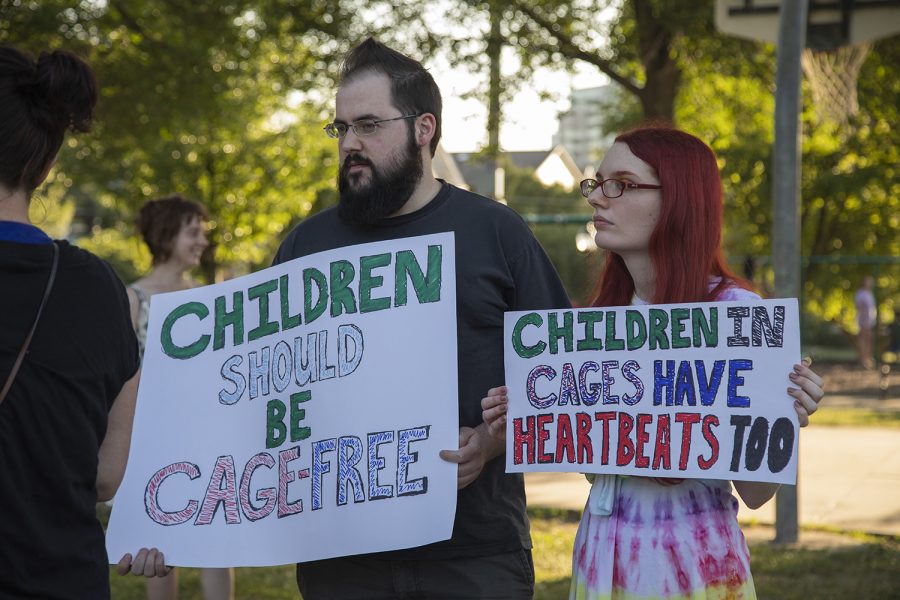 Iowa City joined hundreds of cities protesting U.S. immigration policies and the detainment of immigrants in border camps July 12 at the “Lights for Liberty: Vigil to End Human Concentration Camps.”

Iowa City residents shared personal testimonies involving detainment by ICE and family separation. Afterwards, community members lit candles in College Green Park and stood reflectively in a moment of silence for the children and families separated at the border and other immigration-related injustices.

There were more than 700 “Lights for Liberty” events planned simultaneously on July 12 as ICE raids are expected to begin this weekend in 10 cities. News of inhumane treatment of migrants, including children, is sparking outrage among many at the event in Iowa City and vigils nationally.

“This country has been a light for the world for many people,” Iowa City “Lights for Liberty” organizer Manny Galvez said in Spanish as interpreted by Miriam Porras before a crowd of around 100. “But right now, it’s a place of pain and sorrow for a lot of children and families. So we’d like to gather today with the rest of the country to show our discontent.”

Annette Michaels said she was motivated to show up in solidarity at the vigil after reading reports from physicians and lawyers who visited children being held in squalor at the border camps. She said she is alarmed by efforts to break the rules of the Flores Agreement, a 1997 court ruling that governs how children are detained.

“That’s not what America is supposed to be,” Michaels said. “They shouldn’t be abusing children just because of how they came here.”

Recent reports have revealed that migrant children detained at the border kept in dirty, overcrowded conditions past the court-mandated 72 hours. Some reports show that they do not have adequate access to maintain hygiene with such resources as toothpaste, showers, and soap.

Under federal law and the Flores Agreement, unaccompanied minors children can not be held in a short-term detainment area for more than 72 hours.

One of the event organizers, Elizabeth Rook Panicucci, said the organizing team’s intention was to connect issues happening at the U.S. border to immigration injustices occurring within the country, especially in Iowa City. This meant giving a platform for people to share their individual stories and struggles involving U.S. immigration policy. Several speakers shared stories on the behalf of others to maintain their anonymity.

“Our goal was to have people come out and to recognize immigration cruelty at large, which also means in our own neighborhoods,” Rook Panucucci said.

John Fyotek, who attended the vigil, said he hopes for political change in the future.

“I’m in my 70s now, and I’ve been fairly politically active my whole life and I’ve never seen anything like this go on,” Fyotek said. “Anyways, at this rate, I hate to see my children, and my grandchildren, and future generations starting to see basic human rights being ignored.”